The ongoing demand for the automobile in developed countries and the growth in auto demand in developing countries has imposed great challenges on sustainable transport.  These challenges have prompted a number of studies investigating the influence of the built environment on auto ownership worldwide.  This growing interest is largely driven by the negative consequences of auto dependence on modern society such as air pollution, climate change, and obesity.  Specifically, sprawling urban development has been criticized for its contribution to the rising demand for auto use, and various land use and transport policies have been proposed and implemented in an attempt to reduce auto reliance.  Researchers, in turn, aim to prove that the built environment has effects on auto ownership and offer guidance for policy design and planning implementation.

Recently, rail transit and transit-oriented development (TOD) have been promoted as a way to reduce auto dependence and mitigate traffic congestion.  Although many studies have investigated the ‘ridership bonus’ of rail transit and TOD, few have focused on their impacts on auto ownership and use.  As a result, it remains unclear whether the increase in transit ridership represents a substitution effect or induced demand through the increased availability of transit.  Furthermore, most studies do not disentangle the influences of residential self-selection and the built environment surrounding station areas on auto ownership from the impact of rail transit itself. These gaps create blind spots that limit our understanding of the potential for using rail transit and neighborhood design to curb auto ownership, which may lead to erroneous implications for public policies.

It is important to understand the impact of the built environment on auto ownership.  The built environment influences travel behavior indirectly through auto ownership: according to the 2011 National Household Travel Survey, households without a vehicle made 34.1 percent of their trips by auto, whereas households with one vehicle made 81.9 percent of their trips by auto. Ignoring the mediating role of auto ownership may overlook the importance of certain land use and transport policies, such as unbundling parking from housing costs and vehicle quota schemes, on auto use.

The relationship between residential self-selection and auto ownership is also critical, yet a very limited number of studies have considered its influence.  For example, in many previous studies researchers have inferred that moving into a transit-oriented development (TOD) allows individuals to shed a car (Figure 1a).  However, it is possible that individuals with fewer cars may intentionally choose to live in a TOD (Figure 1b).  TOD and auto ownership can also have a simultaneous relationship (Figure 1c). Moreover, the individual’s attitudes and preferences may reinforce the connections between TOD and auto ownership (Figure 1e-g). 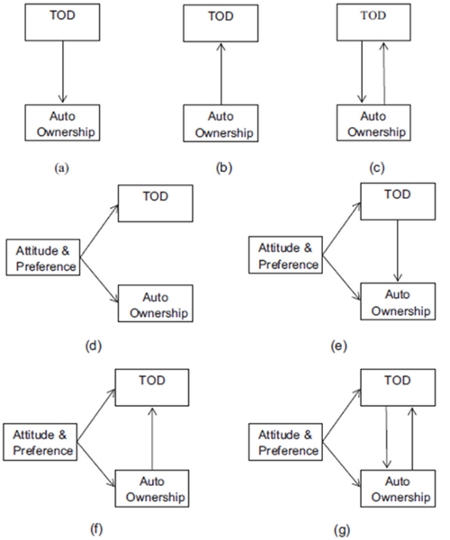 While limited evidence shows that residents living in rail transit station areas tend to own fewer vehicles, it has remained uncertain whether the impact of rail transit on auto ownership is attributable to rail transit itself or the built environment surrounding rail stations, let alone residential self-selection.

To shed light on these questions, we conducted a study to examine the effects of light rail transit (LRT), neighborhood design, and self-selection on auto ownership using the Hiawatha LRT in the Minneapolis­-St. Paul metropolitan area.  The 12-mile LRT was completed in 2004; the section of the corridor used for this study is the middle section of the line, a traditional urban area in South Minneapolis. We chose two sets of control corridors.  First, we chose two urban corridors that resemble the Hiawatha corridor in terms of location, built environment, transit access (via high-frequency bus), and demographics.  Next, we selected two suburban control corridors that have demographics similar to the Hiawatha corridor but with limited access to transit.

The data for the study came from a ten-page self-administered survey mailed to households in all the five corridors.  We purchased two databases of residents for each corridor, a database of ‘movers’ and a database of ‘non-movers’.  The ‘movers’ included all current residents who had moved to their corridor after 2004, the year the Hiawatha LRT opened. The variables examined in this study fall into five categories: auto ownership, neighborhood characteristics (including objective and subjective measures), residential preferences, travel attitudes, and demographics.

Modeling the factors that contribute to auto ownership while controlling for built environment and residential self-selection yielded valuable insights.  We found that several demographic variables play a significant role in auto ownership.  Household income, the number of drivers in a household, and having a driver’s license are all associated with increased auto ownership, while women tend to own fewer autos than men.  In terms of neighborhood characteristics, more businesses within a quarter-mile of the respondent’s home (a density measure) led to lower levels of auto ownership.  In addition, respondents with a pro-driving attitude and preferences for “large back yards” and “lots of off-street parking” owned a greater number of autos, whereas those with a pro-transit attitude and preference for transit access owned fewer autos.

The important takeaway for planners and transportation professionals is that rail transit itself is not sufficient for curbing auto ownership and neighborhood design is important in rail transit development.  In terms of specific neighborhood attributes, large backyards and abundant off-street parking tend to increase auto ownership, and free or underpriced off-street parking subsidizes auto use and leads to sprawling development.  It’s important to remember that people self-select residential location based on their predisposition toward travel and residence.  If parking reform and limited lot size are seen as undesirable by policymakers, offering alternative development such as TOD will enable those who dislike driving to find a neighborhood to match their preference.

This article is based on the paper ‘The Impacts of LRT, Neighbourhood Characteristics, and Self-selection on Auto Ownership: Evidence from Minneapolis-St. Paul’, in Urban Studies.

Jason Cao – University of Minnesota
Jason Cao is an associate professor with the urban and regional planning program of the University of Minnesota’s Humphrey School of Public Affairs. His current research mainly focuses on land-use and transportation planning. He seeks to answer interrelated questions about how transportation investments influence urban development, how land-use patterns shape individuals’ behavior, and how land-use and transportation policies can be used to mitigate traffic congestion and improve our environment. He has been published in Environment and Planning, Journal of the American Planning Association, Transportation, Transportation Research, and others.