More than ten percent of the population of the U.S. is foreign born, reflecting the rise of the market for global talent. But more than one million of this group is either unemployed or underemployed, working in unskilled jobs. In new research Qingfang Wang and Tetiana Lysenko look at the pattern of underemployment for the foreign born in the U.S. They find that both the foreign born and U.S. born whites have better employment outcomes in more ethnically diverse labor markets, while the foreign born are more sensitive to structural changes in the economy, especially in high tech services.

The war for “global talent” has become increasingly fierce worldwide with the continuing rise of a new knowledge-based economy. However, according to a recent study, more than 1.3 million college-educated immigrants are unemployed or working in unskilled jobs such as dishwashers, security guards, and taxi drivers in the United States. The phenomenon is often referred as “brain waste,” “over-education”, or “underemployment.” The most documented outcomes of underemployment include job dissatisfaction, lower organizational commitment, higher turnover intentions, and other negative job attitudes and behaviors. In the global context, the underemployment of highly educated nationals could make brain drain more severe for sending countries by undercutting remittances or the circulation of knowledge or expertise.

Analyses of the U.S. 2006-2010 American Community Survey (ACS) 5 year Public Usable Microdata Sample show that the foreign-born have a slightly higher rate (14.0 percent) of underemployment than the US-born white labor force (13.5 percent). However, there are large differences in the rate of underemployment across immigrant groups from different countries. While most groups from Latin America, such as Mexico (4.4 percent), El Salvador (5.4 percent), and Guatemala (6.1 percent) have much lower rates than the national average, groups from Asia, such as India (27.4 percent), Philippines (24.9 percent), and Korea (24.1 percent), have much higher rates. This pattern is consistent with the level of human capital for each group. Some other foreign-born groups have smaller number of total employed labor force, but have a very high rate of underemployment, such as those from Egypt (31 percent), Ukraine (31.5 percent), Bangladesh (32.4 percent), Kazakhstan (37.6 percent), and Georgia (41.1 percent). The overall pattern is depicted by Figure 1.

Figure 1 – Underemployment rate of immigrants in the U.S. urban areas by country of origin 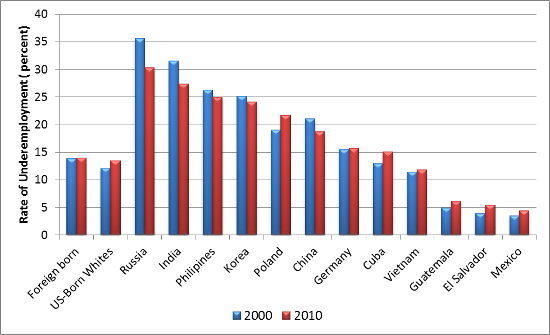 Personal and household characteristics are significantly associated with the rate of underemployment. While those people who speak better English and have a higher level of educational attainment are more likely to be over-educated or underemployed, a longer stay in the U.S. could significantly increase the chance to better match a job with their education. As previous studies have suggested, the foreign-born could have a difficulty in transferring their education credentials and human capital obtained from their home country to the U.S labor market. However, with better knowledge in the receiving society, their situation can be significantly improved.

There is a significant difference across ethnic and racial groups among the foreign-born in the rate of underemployment which is consistent with the differences across countries of origin. Similarly, there is still a gender effect between the foreign-born and the U.S.-born and among sub-groups of the foreign-born after considering human capital and other personal and household characteristics.  It is possible that discriminative practices by employers, ethnic- or nationality-based social networking and social capital accumulation, gender or race-based stereotyping, and especially the interaction between gender and cultural-social practices based on country of origin could make significantly different paths for immigrants and immigrant women in the labor market.

The industrial distribution of the underemployed labor force has distinctive patterns between the foreign-born and the U.S.-born. As shown in Figure 2, both the foreign-born and U.S.-born whites’ labor forces have a higher underemployment rate in the retail trade (around 20 percent). Immigrant groups have much higher rates than the U.S.-born non-Hispanic whites in the information and technology, FIRE, education, transportation and warehousing, and health and social services sectors. At the same time, U.S.-born non-Hispanic whites have a much higher rate than the foreign-born in agriculture and mining, construction, and art, entertainment and recreation sectors. Such distinction suggests that over-education is an industry-specific phenomenon for both the U.S.-born born and for foreigners. 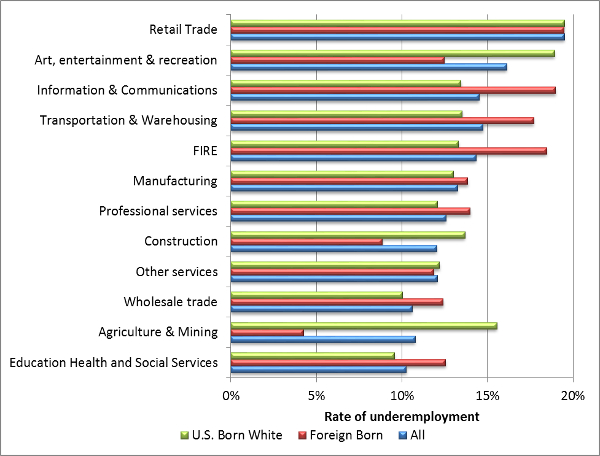 Multilevel modeling regression reveals a set of metropolitan area level characteristics associated with the rate of underemployment. Both foreign-born and US-born whites fare much better in a more ethnically diverse metropolitan labor market by successfully matching their jobs to their educational attainment levels. It is probable that an ethnically diverse labor market provides more evenly distributed job opportunities to everyone with less discrimination practices towards immigrants. Nevertheless, when the proportion of the foreign-born increases in a metropolitan area, the chance of underemployment decreases for US whites. In contrast, the foreign-born themselves may experience competition effects from other foreign-born, with a higher rate of unemployment.

Underemployment is also highly dependent on the regional economic structure across metropolitan areas. While the probability of underemployment for U.S.-born whites is positively related to manufacturing, the foreign-born are more sensitive than U.S.-born whites to the structural changes, especially in high-tech and producer services. While economic restructuring has been transforming regional economies, it has also significantly redefined different opportunity structures for the foreign-born and for natives. With the thriving of knowledge-based service sectors, the foreign born could be more likely to be underemployed, holding other conditions the same.

These findings call for better public policy to overcome a number of institutional barriers such as validating foreign academic credentials, helping new comers with language training, providing employers with more knowledge and cultural competence in evaluating and hiring internationally trained professionals, and, more broadly, reducing discrimination against visible minorities. Furthermore, many factors that are related to underemployment are not immigrant and/or individual-specific. While each individual labor force is embedded in a local labor market, the conditions of each labor market are very important. In this sense, the nature of the immigrant underemployment process is fundamentally indigenous and idiosyncratic in each place. Under the current globalization of a knowledge-based new economy, integrating immigration policies and labor market equity policies targeting at individual labor force (or groups) into regional economic development agenda could provide the best mix of both people- and place-based policy responses.

This article is based on the paper ‘Immigrant underemployment across US metropolitan areas: From a spatial perspective’ in Urban Studies.

Qingfang Wang – University of North Carolina at Charlotte
Qingfang Wang is an associate professor of geography and public policy in the Department of Geography and Earth Sciences at the University of North Carolina at Charlotte.  Her research has focused on the study of racial and ethnic division of labor in U.S. cities, immigrant and ethnic entrepreneurship, and transnational migration of the highly-skilled labor force. Her website can be found here http://clas-pages.uncc.edu/qwang/

Tetiana Lysenko – University of North Carolina at Charlotte
Tetiana Lysenko is a doctoral student in the Department of Geography & Earth Sciences at the University of North Carolina at Charlotte. She received a B.S. degree in International Tourism Management and a M.S. degree in Recreation and Leisure Management. Her current research focuses on immigrant, ethnic minority, and women in the U.S. urban labor markets, particularly in STEM industry.