In recent years, Mexico has been wracked by drug-related violence, which has often been carried out with US-manufactured guns. But how many of the weapons used in Mexico originate in the US? In new research, John H. Patterson and Topher L. McDougal estimate that over 200,000 guns from the US found their way to Mexico each year between 2010 and 2012, around 2 percent of US-sold firearms. They write that the flow of American guns into Mexico and Central America is fuelling violence in those countries, which in turn has caused an upsurge in asylum seekers arriving at the US border.

In May of 2013 President Obama made a three day trip to Mexico and Costa Rica aimed at bolstering partnerships within the region and expanding both economic and security cooperation. On the second day of that trip he addressed a group of university students at the Museo Nacional de Antropología in Mexico City.  In a speech that praised Mexican art, poetry and economic progress he talked of mutual respect and mutual responsibility.  He acknowledged that much of the violence that has plagued Mexico in recent years has been fueled by the US based demand for illicit drugs and that “most of the guns used to commit violence […] in Mexico come from the United States.”

That US factories supply the instruments of Mexican violence is hardly a revelation. While Mexico has a small and heavily restricted firearms industry, the US is the world’s largest manufacturer and supplier of firearms and has a highly permissive regulatory environment. US and Mexican authorities have long recognized that a large quantity of firearms, ammunition and explosives sold legally in the USA are trafficked illegallyinto Mexico. In 2005 the US Bureau of Alcohol, Tobacco, Firearms and Explosives (ATF) initiated Project Gunrunner, a project aimed at stemming the flow of firearms into Mexico and lowering the instances of gun related violence in the border region.

If there has been general consensus on the existence of the problem, its scope has remained somewhat controversial. The most recent government estimate from the ATF stated that 68 percent of the weapons confiscated in Mexico are purchased in the US. Previous estimates had gone as high as 90 percent.  Questions of selection bias not withstanding (Mexican authorities do not send all weapons they confiscate to the ATF for tracing), relying on data from confiscations begs the question: what percentage of the total traffic do these confiscated weapons represent?

Our research finds that nearly 2.2 percent (between 0.9 percent and 3.7 percent) of US domestic arms sales are attributable to the US–Mexico traffic in the period 2010–2012, representing 212,887 firearms (between 89,816 and 359,205) and roughly US$102 million annually. That’s over 600,000 guns in a three year span; more than enough to arm the entire population of Baltimore, Maryland. These numbers are substantially higher than reported confiscations and suggest that a mere 18 percent of weapons crossing the border are successfully interdicted in any given year.

How did we arrive at such alarming numbers? Due to the inherent lack of reliable data, the detection and analysis of illicit activity has long frustrated economists, policy makers and academics. In our case the challenge is compounded by the heavy restrictions on the collection and dissemination of even the legal activity in the US firearms industry (which have become even more restrictive since our study was released). But the growing field of forensic economics has begun to find ways to address these challenges (see, for instance, Radford  and McDougal, et al. on detecting small arms trafficking and diversion from military stockpiles, respectively).

We begin our study by noting the possibility that Federal Firearms Licenses to sell small arms (FFLs) may tend to cluster at the US–Mexico border in numbers disproportionate to the local US population they serve. We take the presence or absence of a firearms retail outlet as a proxy for the degree of success of a local business, and therefore a proxy for realized demand. We regard distance from the US-Mexico border as giving price signals to potential traffickers by imposing fuel and time costs. The negative relationship between those price signals and the quantity of FFLs in any given US county is used to estimate the total realized demand for US-retailed firearms sold to buyers with the intent to traffic them into Mexico.

We employ a negative binomial generalized linear regression utilizing several control variables to isolate the effect of distance from that of local demand. Our control variables include population, mean income, political leaning and spatial auto correlation.

In order to estimate the total volume of firearms traffic, we pair the regression analysis with an epidemiological concept: population attributable fraction (PAF). Our results are shown in Figure 1, below. The PAF is usually used to determine the proportion of disease incidence that is attributable to exposure to the risk factor. Here, we want to attribute the proportion of FFL ‘incidence’ that is attributable to exposure to Mexico. We assume that the 10 percent of counties farthest from Mexico experiences no demand from Mexico at all. It serves as our ‘unexposed’ baseline, and any rise above that level is then attributable to demand from the US–Mexico traffic. 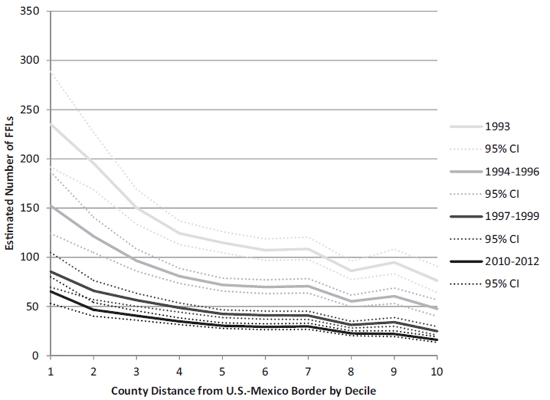 It is possible that FFLs might cluster near the border for other reasons. The presence of informal militia groups such as the minutemen may increase demand along the border. The demand for firearms may also make it preferable for FFLs to become smaller, but more numerous, and therefore harder for the ATF to audit. But there are other, more compelling reasons to think that our findings are not only credible but perhaps even conservative.

For one, our assumption of zero demand in the northern-most decile may not be correct. There is plenty of evidence of Drug Trafficking Organizations from Mexico operating in states far north of the border. The sharp rise in realized demand from the 10th to the 9th decile suggests at least some level of Mexican demand for guns in our ‘unexposed’ decile. If that is the case our assumption of zero demand could be masking a latent level of demand underlying all deciles.

Secondly, relying on FFL data does not capture concentration patterns among gun shows and person-to-person sales. It is difficult to know what percentage of the firearms market these sales represent, but with roughly 2-5,000 shows a year in the US and sales that can reach as high as 1,000 weapons per show, the number is likely substantial.  In a 2000 study the ATF found guns shows to be a “major trafficking channel.”

Though our study set out to uncover realized demand from Mexico only, the large numbers we find conceivably signal a broader regional demand. The estimated 450,000 people in Mexico that depend upon the drug trade for their livelihoods are not enough to absorb the surfeit of weapons flowing into their country. The dramatic rise in homicidal violence in Mexico since 2006 has likely spurred demand for firearms among a non-combatant population increasingly interested in self-defense. But there is also evidence of weapons sold in the US ending up in other Central American countries– Honduras, El Salvador, and Guatemala, among others – where homicide rates are now the highest in world.

This has important policy implications, especially as an influx of Central American unaccompanied children arrive at the US border seeking asylum from some of the world’s most violent places. US Politicians have predictably seized upon their arrival as an opportunity to jockey for political position in the run up to midterm elections. They have just as predictably missed the point. False rumors of loosened immigration policies spread by coyotes seeking to drum up business have certainly played a role. But as Prof. Tom Wong of the University of California San Diego points out, it is Central American violence, not US immigration practices, which have been the determining factor in recent migrations.

As the Obama administration seeks ways to stem the flow of children and expedite their return to Central America, it would do well to consider the reality to which they will be returning. And, more importantly, the role the US has had in creating it.

This article is based on the paper ‘The Way of the Gun: Estimating Firearms Trafficking across the US–Mexico Border’, recently published in the Journal of Economic Geography.