Recent years have seen the rapid expansion of hydraulic fracturing (or ‘fracking’) to access previously uneconomic reserves of oil and gas in the US, particularly in the North West. In new research, Thiemo Fetzer examines the impact of this growth on jobs, wages and manufacturing. He finds that the oil and gas boom has directly created 224,000 jobs, and indirectly supports another 486,000 jobs. While the boom has also had the effect of significantly raising the cost of living for some communities, and labor costs for manufacturers, this has been offset, particularly for energy intensive manufacturing, by the benefits of cheaper gas close to the sites of extraction.

The technology of hydraulic fracturing (‘fracking’) in combination with horizontal drilling has led to an unprecedented growth in US natural gas and crude oil output, with the US moving closer to being independent from foreign energy imports than it has been since the 1970s. The boom in production has the potential to revive the US’s manufacturing sector, which has seen a long lasting decline in its aggregate employment share. Figure 1 indicates the speed at which the location of US fossil fuel production was shifting in the period between 1998-2012. The center of gravity for fossil fuel production has slowly, but steadily moved to the North West, driven by exploration in Colorado, Wyoming and in particular, North Dakota. From 2008 onwards, a second dramatic boom has pulled the center of gravity to the east at an unprecedented speed, due to a boom in natural gas production from the Marcellus shale formation.

Figure 1: The Shale Boom has dramatically shifted the geography of Fossil Fuel Production in the US, 1998 – 2012 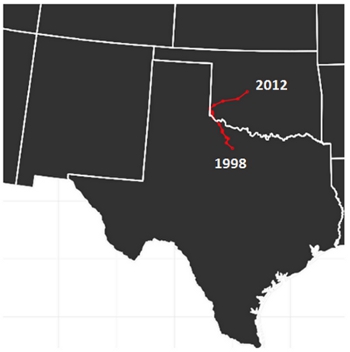 My recent research evaluates the localized effects of the recent shale oil and gas boom on the US. I quantify the local spillovers that stem directly from resource extraction. My main finding is that the oil and gas boom has directly created 224,000 jobs, and indirectly supports another 486,000 jobs. This translates into dramatically lower unemployment rates for counties with active shale oil and gas exploration (see Figure 2). 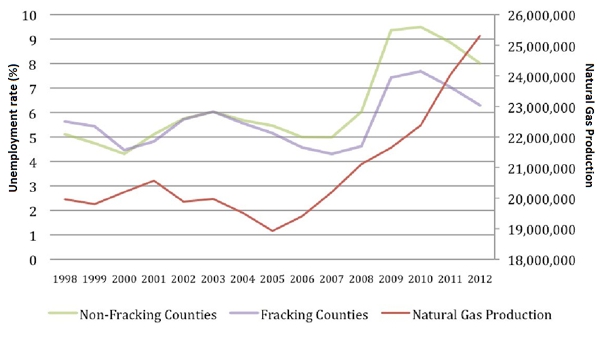 The boom also provides into higher nominal labor incomes, with wages for Oil and Gas sector employees increasing – on average – by almost 30 percent since early 2000. Overall county level personal incomes, which includes labor income (but could also account for non-labor rental or business income) has increased by roughly 13 percent, suggesting that a significant chunk of the natural resource rents remain local.  But as so often, the distribution of these rents is not uniform, which implies that there are winners and losers.

Downsides to the boom?

Rising labor cost in booming regions is not a blessing for all economic sectors or individuals. My research indicates that labor incomes are mainly increasing for a particular demographic: young males with relatively low educational attainment. However, the cost of living in boom towns have increased for everybody. The US Department of Housing and Urban Development provides estimates of fair market rents. These indicate that rental rates for studio apartments in Williams County, the heart of the shale oil boom in North Dakota, have increased by 350 percent since 2000. Wal Mart is currently paying 2.5 times the state minimum wage in order to attract employees in North Dakota.

My research indicates that this appears not to be the case per se. The localized boom creates strong linkages between the manufacturing sector and the oil and gas sector. Firstly, the manufacturing sector provides inputs necessary for oil and gas extraction, but benefits in particular from cheaply available energy. The energy boom is a source of comparative advantage within the US. Being close to the unconventional deposits pays off through lower energy prices. Counties on shale deposits saw their natural gas prices decrease by almost 30 percent relative to counties without unconventional oil and gas resources.  This more than offsets the labor cost increases for many manufacturing sectors, which see their operations expanding in counties with such a local cost advantage.

In order to drill down into the various dimensions of the shale oil and gas boom, you can study the interactive visualization made available on my personal website. You can zoom into areas with active unconventional oil and gas drilling and explore the extent to which these areas benefit from the boom.

The Case of North Dakota

The local dimensions are most starkly visible in the case of North Dakota, where crude oil extraction from tight shale deposits has taken off in recent years. Figure 3 below, is taken from the interactive shale oil and gas impact explorer, which draws on the main analysis of my research. You can see when you zoom into North Dakota, that overall employment in the state in the oil and gas sector has gone up from around 3169 in early 2004 to more than 25,000 by 2012. Employment in the non-oil and gas sectors follows suit, but increases more smoothly. The unemployment rates in North Dakota counties are dramatically lower when compared to the rest of the US (blue dashed lines):  unemployment rates in North Dakota, are hovering around 3 percent, while they are above 7 percent in the rest of the US in 2012. The recession did only marginally increase unemployment in North Dakota. The boom in the oil and gas industry implied that there was little effect of the recession to be felt there. There are significant spillovers from the mining sector into the non-mining sectors. 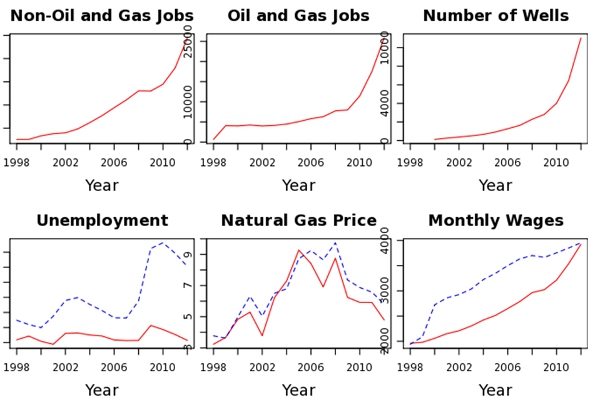 Note: Red line is trend for North Dakota; dashed blue line is for the rest of the US

The second finding from my research can be illustrated using the case of North Dakota as well. While monthly average wages have increased significantly, catching up with the US wide average, natural gas prices in North Dakota have gone down dramatically, with the average natural gas price for industrial use in North Dakota now being about 20-30 percent cheaper than in the rest of the US. While some sectors are adversely affected by higher labor costs, it is particularly energy intensive manufacturing which benefits from gas becoming relatively cheaper close to the sites of extraction.

This article is based on the LSE CEP Discussion Paper, “Fracking Growth”.