From the late 1990s, U.S. electricity markets were deregulated so that half of the country’s nuclear plants became subject to the fluctuations of prices in competitive wholesale electricity markets. In new research, Catherine Hausman finds that despite the predictions of some that safety would be compromised as nuclear power plant managers sought to cut costs, safety levels have actually not worsened, and may have improved. She writes that in the competitive wholesale market, it is in the interests of plant managers to avoid safety incidents that can lead to costly plant shutdowns.

In particular, reasonable concerns were expressed at the time of price deregulation that nuclear power plants subject to the whims of a competitive market would cut corners in the interest of profits – that safety would deteriorate, putting the public at risk. In fact, my research shows that the safety record at competitive plants has been, if anything, better than the record at their rate-regulated utility counterparts. Because half of the power plants remained rate-regulated, in my analysis I can control for changing trends nationwide. The analysis also controls for differential characteristics of the plants in terms of technology, size, etc.

Overall, as Figure 1 illustrates, merchant generator plants have experienced reductions in unsafe events. Reductions have occurred for so-called “initiating events,” unplanned power changes that indicate a malfunction has occurred. They have also occurred for the number of fires, the number of escalated enforcement actions, and the level of radiation exposure experienced by employees. While the point estimates are noisy (because unsafe events are, thankfully, fairly infrequent), the results are robust to a number of different specifications. 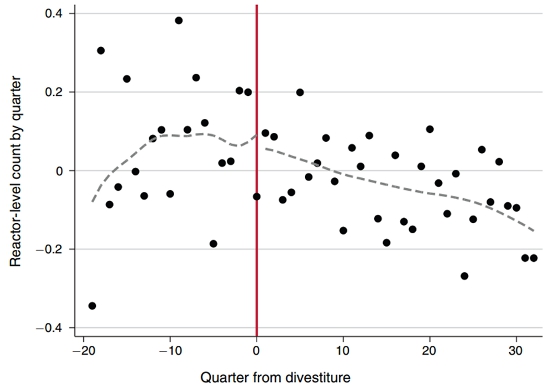 Notes: This figure plots unsafe events at divested units relative to nondivested units. Time is normalized relative to divestiture. Unsafe events include initiating events, fires, and escalated enforcement. The median divestiture is in 2001. Quarter-of-sample effects have been removed. Dashed grey lines show a lowess smoother in the preperiod and postperiod. Source: Author calculations

These findings are particularly interesting in light of recent research by Lucas Davis and Catherine Wolfram (here) showing that electricity generation at nuclear plants substantially increased following the same ownership transfers. The magnitude is striking – the authors find that generation increased by 10 percentage points, totaling more than 40 billion kilowatt hours each year. This could have been expected to increase the exposure of power plants to unsafe events. Overall, however, safety has improved concurrent with this increase in electricity generation.

These findings on both generation and safety are consistent with the incentives faced by nuclear plant operators. Once a plant is built and running, owners have strong incentives to avoid outages. In competitive wholesale markets, the plants have historically earned tremendous operating profits – their marginal cost has been much lower than that of the fossil-fuel fired plants with which they compete. As such, it is in the best interest of plant operators to avoid the sort of safety incidents that lead to extended plant shutdowns. That is, unsafe events incur private costs for plants, in the form of lost profits, beyond the cost of repairs themselves. I hypothesize that, as a result, merchant generators have improved management and maintenance practices leading to improved outcomes for both generation and safety records. Utility operators, in contrast, may have faced muted incentives because of their cost-plus pricing regulation.

Overall, the available evidence is that price deregulation allowed the U.S. to increase nuclear power production without coming at the cost of safety. A number of caveats apply to this broad result, however. First, the most important risk is of course that of a catastrophic event, which is unfortunately not directly measurable. The results in this research rely on the best publicly available data on safety outcomes, which are presumed to be positively correlated with the risk of disaster.

The second, and perhaps most important, caveat is that stringent regulations on safety and maintenance are clearly always needed at nuclear power plants. Limited liability in the event of a catastrophic accident leads to a clear market failure: the plants’ private incentive to maintain a good safety record is not adequate. Moreover, the mechanism through which I hypothesize that safety improved in competitive markets relies heavily on a strong safety regulator that is able to shut down plants deemed unsafe. The result I observe for the U.S. would perhaps no longer hold if safety regulations became less stringent.

Finally, these results may not hold up in the case of a plant facing imminent closure. It is possible that, without the possibility of a future stream of operating profits, an owner would forgo some repairs on the margin. In this case, the role of a safety regulator would become particularly important.

The outlook for nuclear power in the U.S. has historically fluctuated dramatically, both in terms of public support and in terms of economic viability. My research looks at a pivotal moment in the history of nuclear power, as U.S. plants began to operate in competitive wholesale electricity markets. Much more research on the economics of nuclear power is still needed, however. On the one hand, the U.S. fleet is aging and some plants may be facing longer-run profitability issues. Yet, we still don’t know what role nuclear may play in a low-carbon future. Careful research on these sorts of questions could be of tremendous use for policy-makers.

This article is based on the paper ‘Corporate Incentives and Nuclear Safety’ in the American Economic Journal: Economic Policy.