Over the past year, USAPP has run a series of articles looking at the position of women in contemporary U.S. politics, as well as the challenges that they face. This free eCollection is a select sample of some of the most interesting posts from that series. 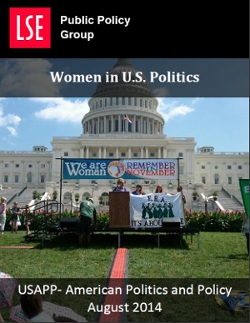 As the Democrats consolidate around Hillary Clinton as the party’s likely nominee in 2016, some are already beginning to question whether the nation is “ready” for a female president. Women have made enormous strides in politics in the 94 years since the Nineteenth Amendment granted them the right to vote—three out of the past five secretaries of state have been women and, in 2012, New Hampshire became the first state to be represented by an all-women delegation—but there is clearly still a great deal of progress to be made. While the 113th Congress contains a record number of women, men still hold 81% of seats and only five states currently have female governors.

A great deal of academic research has been devoted to understanding the unique challenges faced by women seeking elected office as well as their impact once in office. In this eCollection, USAPP has compiled a sample of some of our most interesting posts on this issue.

Note:  This article and eCollection gives the views of the author, and not the position of USApp– American Politics and Policy, nor of the London School of Economics.