In the United States, much of the recent public debate over voter identification (ID) laws have focused on whether stricter ID laws reduce turnout, especially among minority groups, and reduce election fraud, real or imagined.

Figure 1 – How often did you ask voters to show a form of photo identification? New Mexico poll workers, 2008 post-election survey 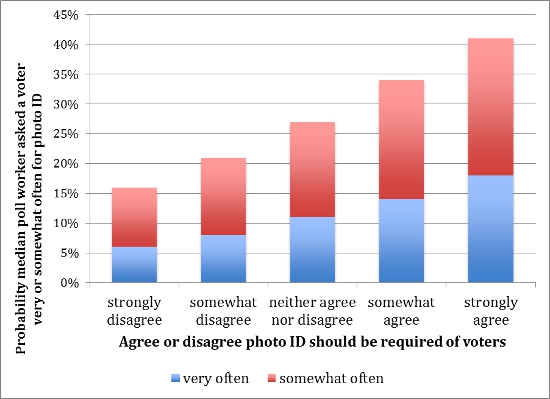 It is important to note that poll workers with higher levels of education are less likely to ask for photo identification somewhat or very often (see Figure 3).  This suggests that better educated poll workers can balance their attitudes about photo identification and recognize that applying their attitudes independently is not appropriate. Having a better educated class of workers can help ensure that election procedures are implemented correctly, and not based on the poll worker’s normative judgments.  Importantly, we found that poll worker training does not overcome this desire among less well educated poll workers to implement the voter ID law as they think is best.

Figure 3 – The impact of education on asking for photo ID 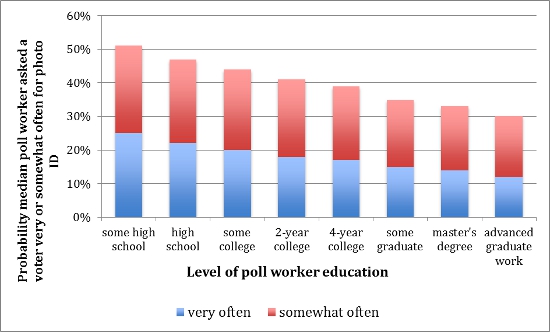 When poll workers are given substantial discretion to implement voter identification requirements, they tend to rely on their own attitudes and beliefs rather than follow the law as explained in their training. In New Mexico, some poll workers ignore the law and instead rely on their feelings and attitudes about the way voter identification should be administered. A voter identification law that substantially reduces the amount of discretion available to poll workers may reduce the influence of individual attitudes. During early voting in Bernalillo County, when voters approached the polling place, they were asked to fill out a card with their name, address, and birth year. Poll workers used this card to look up the voter to ensure they received the proper ballot and gave them less discretion in asking voters for ID. Similarly formulated processes may reduce poll worker discretion in this process.

When we observed the 2009 Albuquerque, New Mexico, city elections, where photo identification was required of voters for the first time, we found that poll workers consistently asked for photo identification as required by law.  There was little of the variation that was observed in the 2008 federal elections. Quite simply, it is easier to implement voter identification procedures that are easy to follow from the poll worker’s point of view, and are clearly communicated to voters when they enter the polling place.

It is important to remember that changing a state’s photo identification laws does not address the underlying problem: some poll workers, especially those who are less well educated, will implement certain policies based on their own biases, not based on the law.  Studying these biases, through surveys and in-person observation, can improve how elections are implemented and the quality of service that voters receive on Election Day.

This article is based on the paper, ‘Who Asks For Voter Identification? Explaining Poll-Worker Discretion’, in The Journal of Politics.

Lonna Rae Atkeson – University of New Mexico
Dr. Lonna Rae Atkeson is a professor and Regents’ Lecturer in the Department of Political Science at the University of New Mexico where she also directs the Center for the Study of Voting, Elections and Democracy.  Professor Atkeson is a nationally recognized expert in the area of elections, election administration, survey methodology, public opinion, and political behavior and has written extensively in these areas.  Most recently she published Evaluating Elections: Tools for Improvement (2013: Cambridge) with R. Michael Alvarez and Thad Hall and Catastrophe Politics:  Public Opinion and How Extraordinary Events Redefine Perceptions of Government (2012, Cambridge) with Cherie Meastas.

Yann P. Kerevel – Lewis University
Dr. Kerevel is an assistant professor in the Department of Political Science at Lewis University. His research has been featured in numerous articles and book chapters and focuses on the study of legislative behavior, electoral systems, election administration, Mexican Politics, Latin American Politics, and Latino Politics. He holds a Ph.D. in political science from the University of New Mexico. Most recently he has published the articles “Explaining the Marginalization of Women in Legislative Institutions” (2013, Journal of Politics, vol. 75, issue 4) with Lonna Atkeson, and “Pork-barreling without Reelection? Evidence from the Mexican Congress” (forthcoming, Legislative Studies Quarterly).

Thad E. Hall – University of Utah
Dr. Thad Hall is professor of political science at the University of Utah.  He has authored or coauthored more than 40 research articles and book chapters and seven books, including: Point, Click, and Vote:  The Future of Internet Voting and Electronic Elections: The Perils and Promise of Digital Democracy.  His most recent book is Evaluating Elections: A Handbook of Methods and Standards.