Performance and cost efficiency concerns have taken center stage in discussions about the funding and oversight of public universities in recent years. One of the primary manifestations of these concerns is the rise of performance funding policies, or policies that seek to directly link state appropriations to the outcomes institutions generate for students.  In a study of over 500 four year post-secondary institutions in all fifty states from 1993-2010, Amanda Rutherford and Thomas Rabovsky find that current performance funding policies are not associated with higher levels of student performance and that these policies may in fact contribute to lower performance over a longer period of time. However, more recent policies linked to institutional base funding may produce some likelihood of long-term improvement and require additional attention by scholars and policymakers.

Historically, oversight of higher education has been oriented toward regulating inputs and procedures, but over the last few decades policymakers have increasingly demanded that universities be held accountable for their performance, particularly with respect to undergraduate student outcomes. The average public four-year college in the United States graduates less than 60 percent of its students in six years, and graduation rates for many racial/ethnic minority groups are much lower. As student outcomes have continued to lag at public colleges and universities, there has been a significant shift in the way that many people think about the need for accountability and transparency with regard to higher education.

Performance funding, initially adopted in 1979 by Tennessee, became increasingly popular during the 1990s as a number of states began to implement a wide range of results-oriented reforms. When states felt the impact of a series of economic recessions during the mid-2000s, performance funding (which often centered on awarding bonus funding) waned in popularity, and several states dropped the performance component of their funding criteria. In the last few years, however, these policies have reemerged, largely due to the efforts of reform-oriented organizations such as Complete College America and the Bill and Melinda Gates Foundation (see Figure 1 below).

At the center of calls for accountability are normative debates about the proper role of quantifiable data about institutional performance and the appropriateness of various approaches for measuring and tracking student success. Recent performance funding policies have been quite controversial. Proponents claim that funding incentives will spur increased performance by providing universities with stronger incentives to focus on and improve student outcomes. Critics, however, worry that these initiatives will negatively impact academic quality and rigor, that they might stifle efforts to improve diversity and provide broad access, or that they may simply be ineffective and divert attention and resources away from other reforms that would be more effective.

Studying U.S. postsecondary institutions across 18 years, we find that performance funding policies are generally unrelated to graduation rates.  Further, the length of time a performance funding policy has been in place may actually cause additional declines in graduate rates–.016 percentage points per year on average.  Additional analyses show the same negative trend for retention rates and degree production. 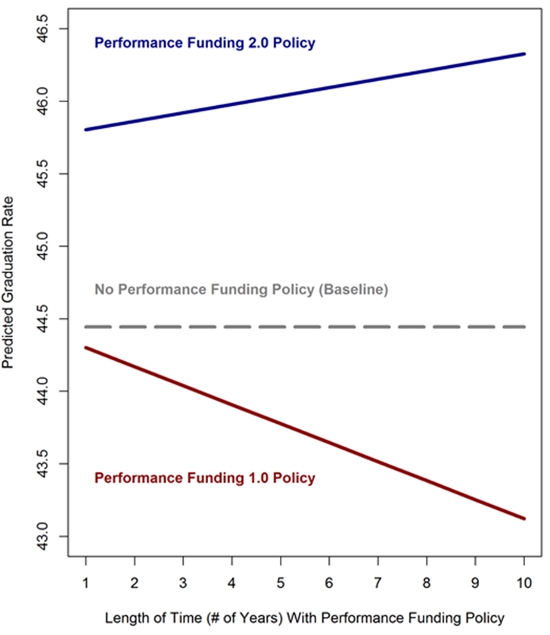 Performance funding policies in place between 1993 and 2010 appear to have very little direct effect on student outcomes, despite the expectation that institutions will react to funding incentives by prioritizing student success. These findings illustrate that student outcomes are not enhanced by performance funding policies. Moreover, student outcomes may even decline following the adoption of these policies. At best, these policies are ineffective, and, at worst, they are negatively linked to student performance. However, performance 2.0 policies may provide some hope that policies linked to institutional base funding may produce long-term improvement. Although a positive relationship was detected for only one performance indicator and was small in size, it is possible that the incentive structures of 2.0 policies are effective in gradually increasing student performance if these policies continue over time.

The rise of PF 2.0 policies may provide useful insights for those hoping to design effective accountability regimes in other policy areas. Because PF 2.0 policies involve larger percentages of base funding, they are likely to attract more attention from administrators. Similarly, as it has become more apparent that performance funding policies are spreading to more states and are likely to be in place for the foreseeable future, institutions may be less likely to discount the commitment of policy-makers to performance funding and may be more likely to respond to performance goals. This view suggests that strong financial incentives, combined with long-term stability, are the most important elements of effective accountability policies. An alternative interpretation, however, might focus on the fact that these newer policies also often use intermediate outcomes and take a more comprehensive view of performance assessment. Thus, issues of policy design related to the relevance and perceived legitimacy of performance data, as opposed to stronger financial incentives, may be critical in creating conditions that enable effective performance management.

This article is based on the paper ‘Evaluating Impacts of Performance Funding Policies on Student Outcomes in Higher Education’, in The Annals of the American Academy of Political and Social Science.