During elections, churches often act as voting sites – they are common and often centrally placed within most American communities. But does voting in a church building influence the way that people vote? Using evidence from survey research, Jordan P. LaBouff finds that church voting promotes more conservative attitudes in voters on issues ranging from immigration to tax policy. He argues that with this in mind, selecting more neutral community sites for polling places would better serve the public.

Houses of worship have long been central to the functioning of American communities. Today, more than 350,000 congregations attended by more than 56 million people serve as centers of social as well as religious life in many U.S. towns and neighborhoods. Voting sites are also regularly located in church buildings. Some have challenged this practice as a violation of the separation between church and state enshrined in the U.S. Constitution, but several state and federal district courts have upheld the use of churches as polling places, pointing out that citizens who prefer to vote elsewhere can use available alternatives such as absentee ballots.

Legalities aside, it may matter that balloting often takes place in churches. A growing body of social science research demonstrates that people are unconsciously influenced by the locations in which they vote. Balloting in churches skews attitudes and votes in conservative directions.

How Locations Can Influence Attitudes and Behavior

Social scientists have long recognized that attitudes and behavior are influenced by physical as well as social contexts. Each setting offers cues that, at least temporarily, prompt people to think and behave in ways consistent with the worldview that space represents. “Priming effect” is the label scholars use for this process. Sometimes, priming happens consciously, as people realize that they are influenced by the situation; much of the time, however, people are unaware of subtle priming influences. Studies have documented the operation of non-conscious priming effects associated with particular settings. For example, people located in a “business” room with briefcases and boardroom tables made more competitive and self-interested decisions than those located in a classroom. In another fascinating finding, researchers demonstrated that the mere presence of a sports drink rather than a bottle of water increased people’s endurance on a treadmill; and they found that supermarket shoppers were more likely to purchase French wine when French (rather than German) music was playing nearby!

The Effects of Balloting Locations

Priming researchers have started to investigate the effects of voting location on citizen views of key policy issues related to particular types of locations. An analysis of Arizona’s 2000 general election demonstrated that citizens voting in schools were more likely to support a state sales tax increase to fund education than citizens with similar social and political characteristics who cast ballots in polling centers not located in schools. In a related laboratory study, the same researchers found that viewing images of a school similarly encouraged support for education-oriented taxation. Tellingly, they also found that showing respondents images of a church reduced support for stem-cell research. This experiment provides some of the first clear-cut evidence that establishing polling places in churches could influence policy attitudes.

More generally, researchers have shown that reminding people about religion in conscious and non-conscious ways is associated with increases in their intentions to be generous, honest, and helpful to others. Unfortunately, priming religious ideas has also been associated with increased aggression and support for violence – in particular, encouraging people so primed to think in more socially prejudiced ways and strive to reinforce existing social hierarchies, such as whites over blacks. Given all scholars know about religious priming, reminders of religion at voting locations surely have political and social implications.

Building on earlier work, my research specifically investigates the potential for religious reminders at balloting locations to influence political attitudes and voter choices. Conducting surveys in either church courtyards or city halls, my colleagues and I asked people from more than 20 countries about political attitudes and feelings toward various minority groups. Even if not religiously inclined, respondents at churches supported more conservative approaches to issues such as immigration, taxes, drug policies, warfare, and abortion. These respondents were also more negative towards minorities such as gay men and (especially Arab) immigrants.

Similar tendencies appear in precinct-level data from the 2004 general election in South Carolina’s Sixth Congressional District. Even after other characteristics were taken into account, citizens who voted in church locations were more supportive of the conservative Republican than the incumbent Democratic candidate. And regardless of outlooks, people voting in churches more strongly supported a state constitutional amendment to ban gay marriage.

Overall, available research shows that voting in churches has real skewing effects. For believers and non-believers alike, situating balloting places inside churches promotes more conservative attitudes on issues ranging from immigration to tax policy. Locational influences matter most for voters who are undecided about issues or candidates. Voting in religious spaces especially influences choices about morally salient issues such as gay marriage and abortion. Behavior is also affected; regardless of individual characteristics and outlooks, citizens who cast ballots in churches are more likely than those voting elsewhere to support conservative political candidates and policy preferences.

Court decisions have concluded that voting in churches is not a Constitutional violation because voters can consciously choose to submit absentee ballots or change polling locations. But current social scientific research shows that balloting in churches skews political results in largely unconscious ways. Because people may not understand how voting sites subtly sway their attitudes and votes, the availability of alternatives that have to be consciously chosen cannot eliminate biases introduced into U.S. elections by the widespread use of churches as polling locations. Neutral community sites would serve the public better.

This article is based on the paper, “Differences in Attitudes towards Outgroups in Religious and Non-Religious Contexts in a Multi-National Sample: A Situational Context Priming Study”, and a recent briefing from the Scholars Strategy Network.

Jordan P. LaBouff – University of Maine
Jordan P. LaBouff is an Assistant Professor and Preceptor of Psychology at the University of Maine. Professor LaBouff is a social psychologist who focuses on relationships between different groups. Most of his research investigates the roles of beliefs (both religious and moral) and religious group membership on people’s attitudes and behaviors. He is particularly interested in how these beliefs, and reminders of these beliefs, might influence cultural and political processes.

Posted In: Democracy and culture | Elections and party politics across the US | Jordan P. LaBouff 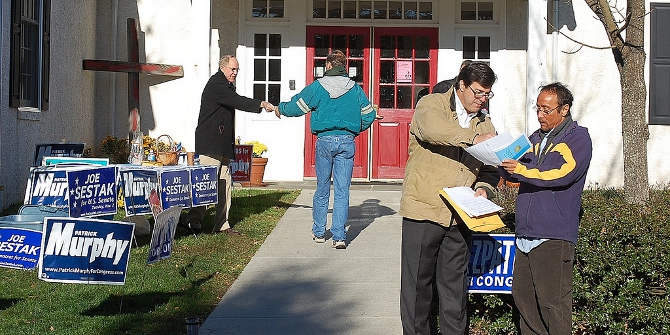