For nearly a decade, Mexico has been embroiled in a war against organized crime, with little success. But how has this often violent campaign affected people’s fears of crime and victimization? In new research, Carlos J. Vilalta uses data from Mexico’s national victimization survey, and finds that people’s daily routines have been affected by their fears about crime, with many now no longer going out at night as a result, and that this is trend that can be made worse by people’s lack of trust in the police. He writes that policy makers need to distinguish between policies to get crime under control and policies to reduce people’s fear of crime.

When in December 2006 Mexican president Felipe Calderon announced the beginning of the war against organized crime (WOC) against the violence of the drug cartels, he warned the Mexican public that it would be a long and a hard fight. But nobody thought it would be so long, so hard, and so damaging to the nation´s international reputation and to its quality of life. Feelings of frustration with the WOC are understandable. In 2010, at its peak, more than half of the adult Mexican population (54.0 percent) believed that the WOC had been lost. Politically speaking, this was a total failure.

Mark Warr was right when he argued that the fear of crime affects more people than crime itself. The most recent official figures in Mexico confirm his argument: While 21.6 million Mexican adults were victimized, 38.7 million reported to have stopped going out in the night due to their perceived risk of victimization.

In new research, based on Mexico’s national victimization survey, I find that those in areas badly affected by drug violence and the WOC were less likely to go out at night due to their fear of crime, a negative effect on their daily routine. I also find that while it has had a strong and direct impact in those areas most affected by it, the WOC itself did not affect the relationship between people’s fear of crime and how they react by changing their daily routines.

One way to comprehend the impact of the WOC in peoples’ lives is, by looking at if/how our daily routines have been affected by it. Scholars have argued for a long time that perception of crime risk plays an important role in shaping our daily routines, which are more important than we normally think. They represent fundamental aspects of our lives that give us a sense of order. Daily routines can be any habit such as going out in the night, going out for shopping, visiting relatives or friends, etc. Naturally, some routines and lifestyles expose individuals to more criminal risk than others. In this sense, either consciously or unconsciously, daily routines can be affected by fear of crime.

There are two theories that explain how fear of crime affects our daily routines: Lifestyle theory and Routine-Activity theory. Both theories assume that crime victimization is a function of the daily routines of victims and offenders and that criminal opportunities exist as part ofeveryday life. The basic idea behind Lifestyle theory is that socio-demographic groups have varying levels of exposure to crime risk. For instance, since younger people go out more often than older people, they are more exposed to greater risks of victimization. On the other hand, Routine-Activity theory explains that crime opportunity depends on the interaction of three components: Suitable targets, motivated offenders, and the absence of capable guardians, such as police and security. The basic premise is that people’s routine activities help create criminal opportunities by changing the amount of the convergence of the previous components. Both theories supplement each other. Lifestyle theory explains why individuals become crime victims while Routine-Activities theory focuses on the circumstances which create criminal opportunities.

So, has the fear provoked by the Mexican war on organized crime impacted on daily routines? Yes. Based on the 2011 national victimization survey (which is based on a random sample of more than 78,000 from across the country), I empirically tested if the Mexican WOC mediated the impact of fear of crime on people’s daily routines in 2010, the peak of the war. First, I find that people’s feelings of not being safe in their neighborhood and their perceived risk of victimization, significantly and independently increased the odds that they would not go out at night.  People’s routines are affected by their fear of crime and victimization.

Second, respondents in areas gravely affected by the WOC and drug violence were also more negatively affected in their daily routines after controlling for a set of classic correlates of the fear of crime and perceived risk of victimization. However, no evidence was found to support the possibility that the local context of the WOC makes a difference to the relationship between people’s perceived risk of victimization or their fear of crime, and their daily routines.

For public officials, it will be useful to know that my analysis also showed that lower levels of trust in the local police increased the odds of not going out in the night –even more than the impact of having been a victim of crime in the same year. Both direct and indirect crime victimization had an independent effect each on discouraging people from going out in the night as well, but not as strong as trust in local police.

Policy makers need to distinguish between crime control policies and policies to reduce people’s fear of crime. While crime and fear of crime are conceptually connected, they are indeed different concepts with different theoretical and empirical grounds. But, in all fairness, given the limited resources available to fight crime in the Mexico, it does make sense that policy makers have attempted to reduce fear of crime focusing solely on attacking crime activity. What does not make sense though, is for them  launch a large scale war on Organized crime and cross their fingers that people’s daily routines will not be affected and people will go on with their lives as normal.

This article is based on the paper, ‘Does the Mexican War on Organized crime Mediate the Impact of Fear of Crime on Daily Routines?’ in Crime & Delinquency.

Carlos J. Vilalta – Centre for Economic Research and Education (CIDE) – Mexico City
Carlos J. Vilalta is a Research Professor at the Center for Economic Research and Education (CIDE). He studies the spatial and temporal elements of crime and fear of crime prevention policies and prison populations. He is also a Visiting Scholar in the Department of Geography at the University of Cambridge, UK. 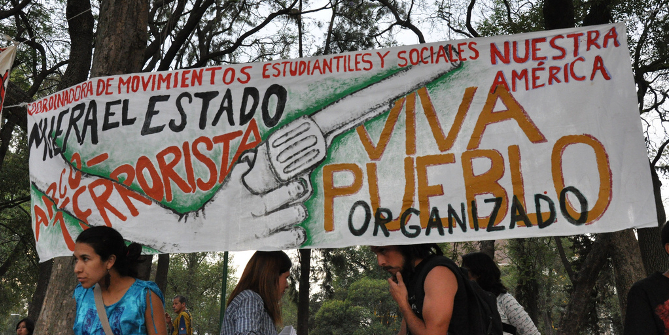