Is there a future for industry in Europe and North America? Giorgio Barba Navaretti and Gianmarco Ottaviano use the example of the newly merged transatlantic car-maker Fiat Chrysler to debunk a number of myths about the nature of manufacturing and its viability in the mature economies of the West.

In the aftermath of the financial crisis, several national leaders have shown a renewed enthusiasm for manufacturing. For example, in 2011, US president Barack Obama said ‘Today, I’m calling for all of us to come together – private sector industry, universities and the government – to spark a renaissance in American manufacturing and help our manufacturers develop the cutting-edge tools they need to compete with anyone in the world… With these key investments, we can ensure that the United States remains a nation that ‘invents it here and manufactures it here’ and creates high-quality, good paying jobs for American workers.’

A few months later, UK Prime Minister David Cameron welcomed new investments by a Japanese car-maker, stressing its contribution to the creation of a ‘more balanced economy, one with manufacturing, innovation and exports at its heart… The automotive sector is leading the way in helping us achieve this – it is an extraordinary success story’.

Conventional wisdom has long maintained that the costs of manufacturing in mature economies (for which, read ‘the West’) are prohibitively high and hence most if not all production will have to be ‘offshored’ to emerging economies (for which, read ‘the East’, ‘the BRICs’ or, more often, simply ‘China’).On the other hand, with news of rising wages in China and some Western manufacturers ‘in-shoring’ jobs back home, there have recently been signs of more positive sentiment.

But both the pessimists and the optimists are often influenced by misconceptions about the nature of manufacturing and its viability in mature economies. Looking at the car industry and, in particular, the recent journey of Fiat and Chrysler ‘to hell and back’ helps debunk some of those myths.

The first myth is that the crucial cost parameter is the wage bill and that the only way to achieve sustainable cost compression is lower wages together with poorer working conditions.

It is true that new industrialising countries have often started from labour-intensive industries (such as clothing and shoe-making) and that the abundance of cheap and laxly regulated labour has represented a formidable initial advantage. Yet the geography of manufacturing follows complicated patterns that are only partially related to cheap factors of production. Drivers such as market size, consumer preferences, transport costs and ‘agglomeration economies’ (the benefits of companies in related businesses being in close proximity to one another) all interact with the costs of labour in explaining the location of industrial activities. 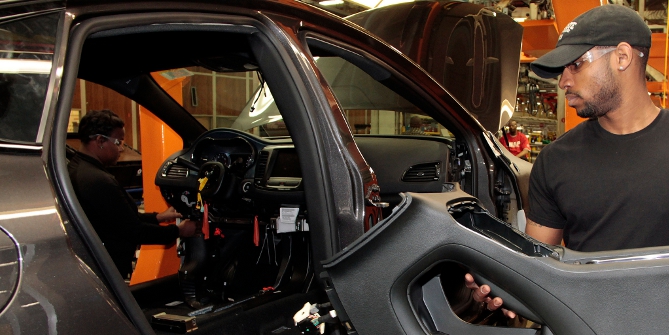 The restructuring of Chrysler inevitably involved considerable cuts in wages and benefits, but these had reached levels that were untenable even when compared with other car-makers in the United States.

The second myth is that only extreme cost compression can sustain prosperous manufacturing in the West.

Containing production costs is obviously important. In carmaking, it traditionally materialises in an obsession with scale. But scale is only one of the pillars on which the joint restructuring of Fiat and Chrysler has been based. Another key pillar is what allows a company to sell more cars for a given price and command a higher price for given costs: ‘quality’. As Chrysler, Fiat and several other car-makers have learned the hard way, cost compression does not work if it entails poor quality. And quality rather than low cost is where mature economies generally (though not always) lead, not least because they are still setting standards.

The third myth is that there is no limit to automation and that only fully automated factories are viable in highwage countries.

Machines cannot fully replace people even in car-making, one of the industries with the highest technological content. Assembling cars requires several manual operations that machines cannot replicate. Precisely because there is a limit to automation (and to age compression), industries in high-income countries must find other ways to reduce the incidence of labour costs. Increasing quality and exploiting economies of scale are both ways of doing so. Another way is to reorganize workflow at the plant level.

A visit to a Fiat Chrysler plant immediately reveals an obsession with reducing waste and dead time according to the rules of ‘World Class Manufacturing’, the company’s own version of lean manufacturing. Workers are fastidiously organised in teams along the assembly line, with rotating well-defined tasks within the team and very detailed performance targets. Tasks may change radically in the rotation and any worker must be able to perform a broad set of them. Some tasks are at the upper limit of, or even above, the worker’s traditional skill level. Workers also contribute to improving and redesigning the process, which is of course a cognitive rather than manual task.

All this raises the educational requirements for new recruits and these are now generally above high school levels for Chrysler’s US plants. It also makes their jobs less ‘offshorable’ to countries with cheap labour. When teams of workers succeed in achieving considerable cost reductions by jointly performing a combination of complex complementary tasks, it is not easy to replicate the same working conditions elsewhere, even if wages are lower.

The last myth is that supporting manufacturing means preserving the status quo.

During economic downturns, it is obviously necessary to preserve enough capacity to maintain the knowledge base and keep alive the agglomeration economies that made industry viable in the first place. At the same time, shedding excess capacity through the closure of weaker and inefficient parts of the industry brings it back to a size that is compatible with the volume of demand. Though painful, this is healthy adjustment and a precondition for future growth. It is like consolidating losses when restructuring a bank: if you do not, the balance sheet keeps being burdened by bad debt.

This approach has underpinned the successful policy actions taken by the US administration to support and restructure car-making in 2008-09. In contrast, Europe has always been more careful about protecting jobs and avoiding painful adjustments. As a consequence, adjustment has been delayed, with most mass market producers still keeping their European plants working below capacity, using temporary layoff schemes where available, but reporting losses for their European operations.

Together with the asymmetric recovery of demand on the two sides of the Atlantic, the different speed of reaction of policy-makers goes a long way towards explaining why, in the aftermath of the financial crisis, manufacturers like Fiat Chrysler started to make profits again in the United States much earlier than in Europe.

This article originally appeared in the Autumn 2014 issue of CentrePiece, the magazine of the Centre for Economic Performance (CEP) at LSE, and summarizes ‘Made in Torino? Fiat Chrysler and the Future of Industry’, a book by Giorgio Barba Navaretti and Gianmarco Ottaviano, published in Italian by Il Mulino in May. The analysis is based on fieldwork performed by the authors together with Maria Teresa Trentinaglia in Turin and Detroit benefitting from unique access to Fiat Chrysler data sources, executives, managers, engineers and workers on both sides of the Atlantic.

Giorgio Barba Navaretti – University of Milan
Giorgio Barba Navaretti is Professor of Economics at the University of Milan and Scientific Director of the Centro Studi Luca d’Agliano. He is specialised in international and development economics. He has been working extensively on the economics of multinational firms, on the link between trade, foreign direct investments and technology diffusion, on international economic policy and on firms’ dynamics in developing countries. He is the coauthor of Multinationals in the World Economy with Anthony J.Venables (Princeton University Press 2004; Le multinazionali nell’economia mondiale, Il Mulino  2006).