This midterm cycle has been characterized by fierce debates over voter identification measures in some states that some see as restricting the rights of minorities to vote. While the Supreme Court’s decisions on state voter ID laws have been important, state courts play a significant role as well, write Joshua A. Douglas and Christopher K. Stewart. They argue that in issues such as voter ID, liberal-leaning judges are more likely to think of the right to vote in broad terms as compared to more conservative judges, as are appointed judges compared to those that are elected.

State courts are paramount in defining the constitutional right to vote.  This is in part because the right to vote is a state-based right protected under state constitutions.   In addition, election administration is largely state-driven, with states regulating most of the rules for casting and counting ballots.  State law thus guarantees – and state courts interpret – the voting rights that we cherish so much as a society.

State judges have either broadly construed state constitutions as going beyond the federal constitution, or narrowly analyzed the state protection to be merely co-extensive with the more limited rule from the U.S. Supreme Court’s pronouncements under federal law.  State courts that issue rulings broadly defining the constitutional right to vote best protect the most fundamental right in our democracy, while state decisions that constrain voting to a narrower scope do harm to that ideal.

We should favor a broad analysis of the constitutional right to vote because voting is the most important, fundamental right that underlies our entire democracy.   Voting should be as easy as practically possible for all eligible citizens; the foundation of our democracy begins with individuals going to the polls to select leaders to govern them.  Achieving this robust protection requires a comprehensive understanding of how state judges rule in these cases, accompanied with a call for state judges to construe their state constitution’s grant of voting rights to the fullest extent possible.

The debate over voter ID laws exemplifies the divergent approaches of state courts.  Although recent federal court decisions on voter ID laws in Wisconsin and Texas have garnered considerable nationalattention, state courts have played a significant role in this debate as well.

Since the U.S. Supreme Court’s 2008 ruling in Crawford v. Marion County Election Board that Indiana’s voter ID law did not violate the U.S. Constitution, state judges across the country have entered the debate over the constitutionality of voter identification requirements. Six state courts (in Colorado, Michigan, Indiana, Georgia, Tennessee, and Wisconsin) have upheld their state’s voter ID laws, largely by following the narrow interpretation of the right to vote from Crawford, while three (in Missouri, Pennsylvania, and Arkansas) have struck them down by invoking the broader protection of the state’s constitution.

For instance, in 2014 the Wisconsin Supreme Court issued two opinions, one 5-2 and the other 4-3, upholding the state’s voter ID law, following federal jurisprudence for the state constitutional question to conclude that the law did not add an additional qualification to vote and did not impose an undue burden on voting.

For example, the Missouri Supreme Court struck down its voter ID law in 2006 by holding that the law violated the Missouri Constitution’s equal protection clause and right-to-vote provision. Specifically, the court carefully distinguished the broader fundamental right to vote under its state constitution from the narrower protection federal courts have found within the U.S. Constitution.  The court thus properly recognized that its state constitution’s express provision of the right to vote places a greater burden on the government to justify a law that threatens that right.

Pennsylvania courts, too, acknowledged the broader force of its state constitution, leading to the invalidation of the state’s strict voter ID law shortly before the 2012 election.  Similarly, on October 15, 2014, the Arkansas Supreme Court upheld a lower court’s ruling striking down that state’s voter ID law under the state constitution, refusing to follow narrower federal jurisprudence – meaning that the strict voter ID law is unenforceable in the upcoming election in that state.

This discussion barely scratches the surface of the body of election law cases state courts consider every year. State judges also rule on issues of campaign finance, ballot access, and the voting process, among others. These cases alter the makeup of the electorate and the rules for election administration, in turn having the potential to affect electoral outcomes.

Moreover, further analysis on state right-to-vote decisions can help to uncover how the ideology of the judge or the method of judicial selection may influence the analysis.  Although quantitative empirical studies are needed, as a preliminary finding it appears that liberal-leaning judges are more likely to construe the right to vote broadly as compared to conservative jurists, especially for partisan-laden issues such as voter ID.  In addition, appointed judges seem more likely than elected judges to define the right to vote robustly, at least for certain topics such as felon disenfranchisement.  This analysis can contribute to the existing debate over who we want as judges as well as offer insights on the preferable method of judicial selection.

Ultimately, providing the most robust protection for the constitutional right to vote requires us, as citizens, advocates, and scholars, to understand both how state courts construe these rights and how ideology and judicial selection may influence the state judges who issue these opinions.

This article is based on Professor Douglas’s working paper, ‘State Judges and the Right to Vote’.  A draft of that article, which was commissioned by the Proteus Fund, is available here.

Posted In: Christopher K. Stewart | Elections and party politics across the US | Joshua A. Douglas 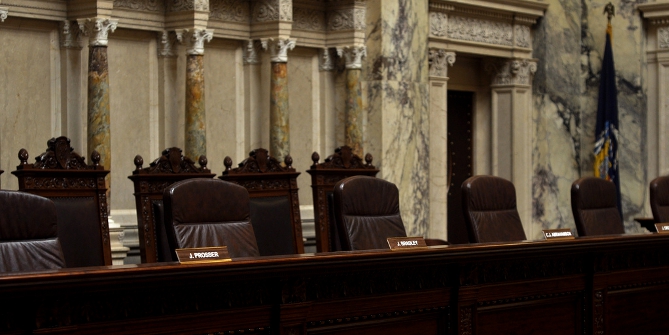