Isabel López Ruiz finds this collection to be the most up to date, comprehensive overview of current trends in abortion legislation worldwide. It is recommend to readers with a background in law and those who wish to learn more about the past, present, and future of reproductive and sexual health.

Ana María Acevedo, an Argentinian mother of two; Gabriela de Oliveira Cordeiro, a nineteen-year-old from the outskirts of Rio de Janeiro; Savita Halappanavar, an Indian woman living in Ireland. These are just three of the thousands of women who have been failed by their country’s abortion legislation. Their tragic stories, alongside dozens of other cases, form the basis of the sixteen enlightening chapters in Abortion Law in Transnational Perspective: Cases and Controversies, edited by Rebecca J. Cook, Joanna N. Erdman, and Bernard M. Dickens.

Abortion legislation is often reduced to Roe v. Wade. Whilst the significance of this case cannot be ignored, Cook, Erdman, and Dickens, all experts in the field of reproductive and sexual law, brilliantly succeed in opening up the issue of abortion to include cases from around the world. The different chapters highlight the importance of international legislation and the benefits of examining different countries’ past and present laws in order to avoid future pitfalls. In moving away from a traditionally Anglo-centric perspective, readers can learn about different legal approaches to abortion in countries normally overlooked by mainstream media. This publication is especially relevant in a year that has seen a series of controversial decisions concerning reproductive law, proving that abortion is still a hotly contested issue.

Each chapter follows either the evolution of abortion legislation in a specific country or invites the reader to consider different points of view with regards to the legal treatment of reproductive and sexual health. The book contains four distinct sections: the first concerns constitutional values and how different legal regimes regulate abortion, the second section brings together the issue of liberalising access to abortion with the practical availability of services, the third section focuses on frames of argumentation and the ways in which different bodies put forward their points of view, whilst the fourth and final section focuses on the narratives that arise from legal debates on abortion and how they, in turn, shape the way we think about reproductive decisions.

Although certainly useful in laying down the grounds for legal terminology and historical context, the first chapter, ‘The Constitutionalization of Abortion,’ is perhaps the most inaccessible. Siegel’s writing style is clear, but the abundance of legal jargon may deter readers who do not specialise in law. However, I would strongly advise against this. Once readers understand basic terms and distinctions, such as the crucial difference between ‘constitutional’ and ‘criminal’ law, the following chapters are nothing short of gripping, brimming with much more accessible ideas and interspersed with shocking cases that will have readers shaking their heads at the pages in disbelief. 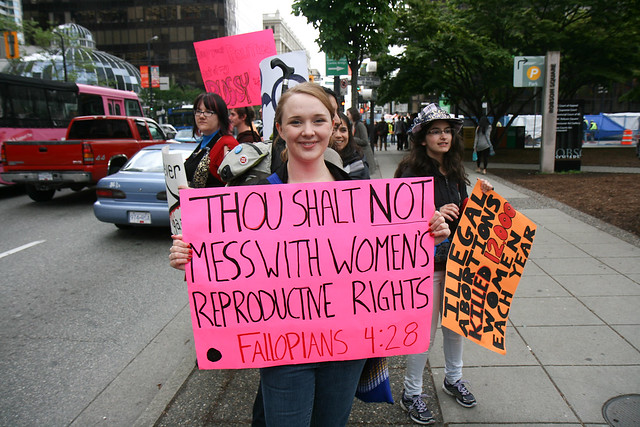 Without a doubt, the most compelling section of Abortion Law in Transnational Perspective is the final one, which focuses on narratives and social meanings ascribed to abortion. Although the whole book is current and features recent cases that most readers will be familiar with, this final section is especially relevant as it focuses on the ways in which social connotations shape reproductive legislation and, in turn, how legislation shapes social meaning. The final three chapters make for some very satisfying reading, as they allow the reader to reflect on their own personal beliefs and the media’s portrayal of abortion using narratives of prenatal personhood and innocent suffering.

Bernard M. Dickens’ chapter ‘The Right to Conscience’ presents an extremely compelling argument rarely discussed in the context of abortion. Viewing the concept of ‘conscience’ through a pro-choice lens, Dickens explores the way in which medical professionals can exercise their right to freedom of conscience in cases when they wish to advise prospective women about their options. The chapter discusses the ideological and practical difficulties faced by doctors and nurses wishing to exercise their rights as abortion providers. Dickens’ arguments are lucid, thought provoking, and follow a clear line of thought throughout: that ‘the human right to act lawfully according to one’s individual conscience is not a monopoly of abortion opponents’ (p.210). As a reader, I found it fascinating to see this concept being turned on its head.

The book’s final chapter ‘Stigmatized Meanings of Criminal Abortion’ invites the reader to move beyond a purely quantitative analysis of the consequences of criminalising abortion and focuses instead on the resulting stigma and emotional damage. Cook offers some compelling arguments in favour of decriminalising abortion, as she believes that by placing abortion in the realm of criminal law, ‘the state stigmatizes women, undermining their capacities, and questions their sexuality and their social roles’ (p.349). This exemplary argument is masterfully developed, with the author even giving practical advice in the book’s final lines, as she advises policy makers to look beyond numerical statistics and start acknowledging the social stigma that inevitably follows criminalising abortion.

Abortion Law in Transnational Perspective is an essential text for those wanting to understand current worldwide abortion trends. It is authoritative and elucidating, and although there are instances when the legal terminology can be a little off-putting, the initial lexical shock should not be enough to deter readers. Its grounding on judicial cases is certainly a strength, as each author can make compelling points based on facts and steer clear of simply appealing to the emotions. That is not to say that there is no bias, for pro-choice readers will certainly feel a connection with most of the featured authors. However, by taking actual legal cases as their starting point, authors successfully engage with opposing points of view and controversial cases in an objective and professional manner.

Although there is abundant literature on this topic, this book fills a gap in the market. It is the most up to date, comprehensive overview of current trends in abortion legislation worldwide. I thoroughly recommend it to readers with a background in law and anyone with an interest in abortion who wishes to learn more about the past, present, and future of reproductive and sexual health.

Isabel López Ruiz – Durham University
Isabel López Ruiz is currently completing an MA in Twentieth-Century Literary Studies at Durham University, having previously graduated from the University of Granada (Spain) with a BA in English Language and Literature. Isabel has written articles for the Times Higher Education (both online and in print) and The Huffington Post. She also sub-edits Palatinate, Durham’s Student Newspaper. Her research interests centre on feminist literary criticism and 20th century women’s poetry, especially Sylvia Plath. She tweets at @packt_sardines.