International sanctions are one of the most commonly used tools to instigate democratisation in the post-Cold War era. However, despite long-term sanction pressure from the West, non-democratic rule has proven to be extremely persistent. Based on new research from 1990 to 2011, Julia Grauvogel and Christian von Soest provide new insights for the research on sanctions and on authoritarian regimes. Most significantly, sanctions strengthen authoritarian rule if the regime manages to incorporate their existence into its legitimation strategy.

After Russia’s annexation of Crimea, the EU and US adopted restrictive measures against those accused of undermining Ukrainian sovereignty. Senior officials and separatist leaders are subject to asset freezes and travel bans while Russian state banks and corporations face financial and trade restrictions. These measures were expanded several times since their imposition. On 15 December, the Council of the European Union confirmed the proposal to strengthen the sanctions by the High Representative for Foreign Affairs and Security Policy Federica Mogherini.

The effectiveness of the measures, however, is contested, with some member states publicly questioning their usefulness. Czech Prime Minister Bohuslav Sobotka told Reuters that “the mentality of Russian society after the sanctions were enacted rather goes in the way of solidifying support for the Russian leadership than (…) lowering support for Putin and the policy he represents.” This should be of key concern to European decision-makers as the sanctions’ economic impact is supposed to translate into political pressure for the target to change course.

Sanctions on Russia are not the only example of the apparent failure of sanctions to change political behavior or even instigate political liberalization. Belarus, Cuba, Eritrea, Iran, North Korea and Syria have all stubbornly withstood external pressure. But this is only one side of the story. Recent research shows that sanctions, especially those that explicitly seek to promote democracy, are better than their reputation. Such democratic sanctions are related to a higher probability of leadership and regime change. Sanctions also encouraged antiapartheid resistance in South Africa and paved the way for regionally mediated peace negotiations in Burundi. This raises the question which factors account for a regime’s ability to resist international pressure.

Research on sanctions increasingly acknowledges that domestic characteristics of the targeted regimes mediate the effect of external pressure. For example, some regimes are better equipped to compensate the loss of international sources of revenue resulting from sanctions. Going beyond the “naïve theory” that the financial pain inflicted by sanctions automatically translates into political pressure, several case studies suggest that sanctions are used as symbols in the regime’s struggle for legitimacy. Using a new global dataset including 120 sanction episodes from 1990 to 2011, we show that sanctions strengthen authoritarian rule if the regime manages to use this external pressure to bolster its legitimation strategy.

A regime that propagates a strongly anti-Western narrative might see US and EU sanctions as a welcome confirmation of its own nationalist discourse and can stress the need to preserve national sovereignty in view of alleged Western interference. As measuring legitimacy through representative public opinion surveys is a notoriously difficult undertaking, especially in repressive authoritarian regimes, our findings are based on a new global expert survey that captures the claims to legitimacy of non-democratic regimes.

Strong ideologies and other claims to exert the right to rule help a regime to withstand external sanction pressure in three ways: First, they enhance the cohesion of the ruling elite. Our research shows that in Zimbabwe, for example, party officials and ministers actually asked EU representatives to remain on the sanction list as they feared to be stigmatized as “sell-outs” when being removed from the “black list”. Second, strong claims to legitimacy allow regimes to delegitimize any criticism of the president or the regime as an insult to the nation as such, especially at times when the entire population is supposed to stand together in the face of sanctions by the common enemy.

Accordingly, any voicing of dissent is currently branded as unpatriotic in Putin’s Russia. Such isolation was also used in Uzbekistan, where the government accused the major opposition party of scarifying national interests at the expense of support by the West. The government claims based on radical-anti Islamism and Uzbek nationalism ruled out the voicing of dissent by Muslim minorities. Finally, strong and coherent legitimation strategies increase the likelihood that the population buys into such claims. Such an unintended ‘rally-round-the-flag’ effect occurs when the targeted regime controls the media and when sanctions are imposed on regimes with weak social and economic ties to the sanctioner. As can be seen in Cuba, Eritrea, and North Korea, this also makes it easier to discredit the regime disapproval conveyed by sanctions.

Our research highlights that regimes with strong legitimation narratives often use external pressure as a device to bolster their rule. At the moment, western sanctions clearly help Russian President Putin to solidify his power and popularity. Yet sanctions’ effects on domestic power structures remain ambiguous. President Putin will have a much harder time to uphold his legitimation strategy should economic growth remain low. This will seriously dent any performance claim that the current regime is the best to provide jobs, education and good health services to its citizens. These findings underscore the need to consider the interplay between the signals conveyed by sanctions, their financial costs and the regimes’ claims to legitimacy. Western sanction senders need to be aware that domestic legitimation strategies fundamentally affect the impact of sanctions on the targeted regimes. 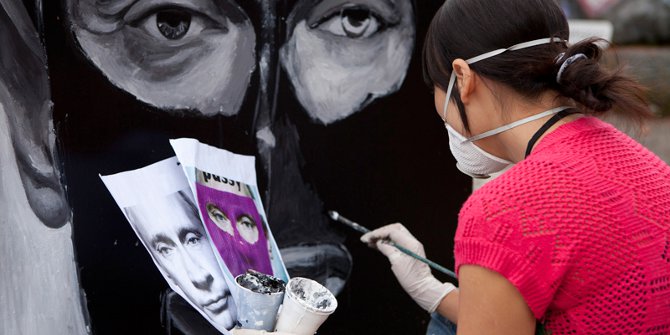