The past three decades have seen a rapid increase in the financialization of the American economy, with the financial sector growing in importance to the economy. In new research, Christopher Witko finds that this growth in financialization was not a ‘natural’ economic development, but a consequence of public policy choices that occur when large firms in the FIRE (finance, insurance and real estate) sector are active in politics, and the Democratic Party and unions are not as strong.

Financialization has dramatically reshaped affluent economies.  Though a larger financial sector has not been universally condemned, critics claim that financialization has contributed to a variety of problems, including income inequality, growing household debt, slow economic growth, economic instability and ultimately global economic crisis.  Thus, understanding the potential political roots of this process are critically important.  Studying the financialization of the American economy is especially useful as a starting point since it may be the archetypal financialized economy and, as the recent global economic crisis demonstrated, the financialization of the American economy has important implications for economies throughout the globe. In recent research, I investigate how politics and policy shaped the pace of financialization in the U.S. over the last several decades.

My argument is straightforward – because financialization produces economic winners and losers we can expect it to proceed more rapidly when the “winners” have more power in government, and less rapidly when the “losers” have more power.  The obvious winners of financialization are financial industry managers and shareholders whose incomes have grown much more rapidly than other similarly skilled professionals in recent years.  But corporate managers and wealthy investors also benefit with inflated stock prices.  The losers are the poor and working class individuals that lack the capital or expertise to take advantage of the new investment opportunities and who bear a disproportionate share of the growing indebtedness that are part of financialization.  Furthermore, these individuals have suffered since many companies have slashed pay, benefits and employees in recent decades to maintain the high profit margins and stock price that is critical for firms in a financialized economy.

The winners and losers of financialization are represented in both the party and interest group systems.  The clearest winners of financialization are well represented in the interest system – large firms in the FIRE (finance, insurance and real estate) sector are very active in politics.  If my argument is correct we should observe that increases in the political mobilization of financial firms precede increases in financialization, so I developed a measure of the political mobilization of large banks by coding the content in the American Bankers Association trade magazine that was devoted to political matters versus more mundane questions of where to locate branches or how to keep employees happy.

Labor unions and the Democratic Party traditionally represent the working class and lower income groups in American politics and I anticipated that when these organizations were stronger, financialization would be slower.  I measured union strength with union density (the percentage of non-agricultural workers covered by a collective bargaining agreement), and I simply assigned 1 point for each institution controlled by Democrats (of the House, Senate and Presidency) to create a measure of Democratic Party strength in government.

However, because some observers have argued that the Democratic Party has become less representative of the working class and lower income as labor has declined and the party has sought more support from middle class professionals, I also investigated whether the negative effect on financialization of the Democratic Party is lessened when labor unions are weaker and the party attracts more electoral support from professionals (using NES data on presidential vote choice among professionals and managers versus non-professionals/non-managers).  I also considered whether deregulation might be a policy that could translate the power of these different organizations into financial outcomes using a variable measuring major deregulatory events using data from 1949-2005.

Figure 1 below presents the trends in these variables over time.  The thick black line represents the percentage of GDP derived from the FIRE sector, which I use as the measure of financialization (I also examined other measures of financialization, and the results are similar).  In line with expectations, financialization appears to take place more rapidly when the FIRE sector is more active in politics and unions and the Democratic Party are weaker.  In the early part of the time series financial activity increases quite rapidly in the post-war years.  However, it slows substantially during the 1960s before some periods of rapid growth after the late 1970s.  We see that there was a major increase in FIRE sector focus on politics in the late 1950s and early 1960s and again in the late 1970s and early 1980s (preceding the increasing rate of financialization in the 1980s), with fairly high levels in the late 1980s through mid-1990s.   What was clearly different in the later period was that unions and the Democratic Party both began to experience decline. 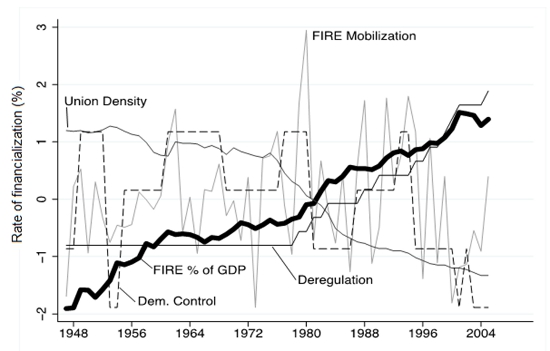 These contingent relationships are shown in Figure 2 below, which presents the estimated effect on the pace of financialization of an additional institution being controlled by the Democratic Party at high rates of unionization and low rates of unionization, and a large and small gap in support among professionals and managers versus non-professionals/non-managers.  We see that at plus one standard deviations for each of these variables the Democratic Party has a negative and significant effect on the pace of financialization, which disappears when these variables are at minus one standard deviations.

Figure 2 – Union Decline, Democratic Constituency Change and the Effect of Democratic Party Control on the Pace of Financialization 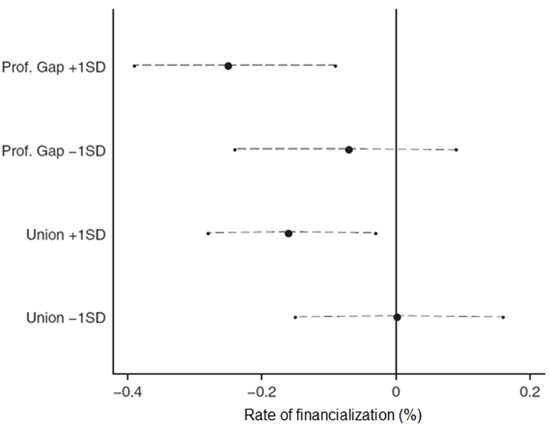 While much more work remains to be done to fully understand how politics shapes financialization, my research shows that financialization was not simply a “natural” economic development in America stemming from the profit-maximizing decisions of economic actors, but rather that government and public policy choices played a critical role in the financialization of the American economy.  Because the decline and transformation of left and center-left parties and the weakening of labor unions are almost ubiquitous across affluent countries, this study also has important implications for the process of financialization in other countries.

This article is based on the paper ‘The Politics of Financialization in the United States, 1949–2005’ in the British Journal of Political Science.