In Maine this week Daily Kos reports that thousands of food stamp recipients have been hit by new eligibility requirements that require them to work. They say that by the end of 2014, more than 6,500 of the state’s 215,000 SNAP beneficiaries have been taken off the program.

Hit & Run brings news of what they characterize as a potential civil liberties violation in Boston, Massachusetts. They say that Boston Mayor Martin Walsh has signed an agreement with the U.S. Olympic Committee that prevents city employees from making negative comments about the city’s bid for the 2024 Olympics.

Heading west to New York State, the Brennan Centre for Justice writes on Wednesday that one of Governor Andrew Cuomo’s priorities for 2015 should be a ‘war on corruption’. They say that outside spending in New York’s state elections has grown to nearly $20 million, with much of this consisting of ‘dark money’ which conceals donors’ identities. Staying in the Empire State, this week also saw the arrest of State Assembly Speaker, Sheldon Silver on corruption charges. Capitol Confidential reports on comments from U.S. Attorney Preet Bharara, that the arrest shows that there is a “lack of transparency, lack of accountability and lack of principle, joined with an overabundance of greed, cronyism and self-dealing” in New York’s state government. National Journal, meanwhile, looks at whether or not GOP Representative, Chris Gibson, can help win a statewide office for his party in New York for the first time since 2006.

Raging Chicken Press writes that Pennsylvania legislators have introduced bills that will require welfare recipients to be drug tested. They say that there is no need for these bills, as similar programs in other states have been a ‘total waste of time and money’.

Virginia’s Bearing Drift reports this week that the State Senate’s Commerce and Labor Committee has voted down a measure which would have increased the state’s minimum wage from its current rate of $8 per hour in increments to $10.10 by 2017. They say that the bigger question for the state is whether or not the Democratic Governor, Terry McAuliffe cares about anything that happens during the current legislative session, given his obvious designs on a position in Washington DC. 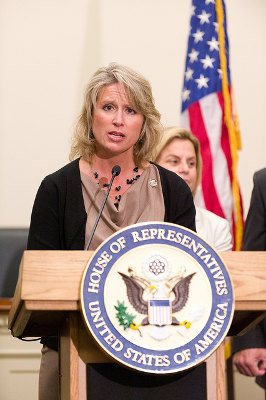 This week North Carolina Representative, Renee Ellmers, led the charge to pull the Republicans’ House bill that would have banned abortion after 20 weeks. Roll Call’s At the Races writes that there may be some local fallout for Ellmers, as Jim Duncan, a county GOP chair is considering a primary bid against her in 2016.

Continuing south to the Sunshine State, according to Saint Peters Blog Florida had the nation’s highest rate of mortgage foreclosures in 2014, at 2.3 percent.

Alabama’s Yellowhammer has the news on Friday that a federal judge has struck down the state’s ban on gay marriage, on the grounds that it violates the Equal Protection Clause of the 14th Amendment of the Constitution.

On Tuesday, Freak Out Nation reports that three earthquakes shook Texas at the same time as the new Republican Governor, Greg Abbott, was sworn in. They say that the earthquakes were likely related to the boom in fracking in the state, of which Abbott is very much in favor.

Ohio’s Plunderbund says this week that despite the election promises of GOP Governor, John Kasich around job creation, after four years the state is still 109,000 jobs short of recouping those lost during the great recession. This is against a national backdrop of an improving private sector, and falling unemployment.

Moving north to Ohio, eclecta blog writes on Monday that Governor Rick Snyder is taking credit for the expansion of Medicaid in the state under the Affordable Care Act. They say that the only thing that the Governor should really take credit for is putting the state’s budget into deficit by $325 million due to business tax breaks.

In Wisconsin this week, Blogging Blue has what they say is the ‘cold hard truth’ about Governor Scott Walker and taxes – that the richest in the state actually have lower taxes than the poorest. They say that the lowest 20 percent by income pay 8.9 percent of their income in state and local taxes, while the top 1 percent pay only 6.2 percent in state and local taxes. Staying in Wisconsin, Crooks & Liars says that the state’s Democratic Party is ‘in disarray’, with its chair, Mike Tate, ‘kowtowing’ to the son of a billionaire union-buster, and presiding over Democratic losses in the state House and Governor’s mansion.

Heading down to Kansas, PoliticusUSA reports that despite a massive revenue shortfall, Republican Governor, Sam Brownback, still intends to abolish income taxes while increasing sales taxes – a tactic which will disproportionately affect those on low incomes.

North Dakota has enjoyed the fruits of the shale gas boom that has occurred over the last few years. Say Anything Blog writes this week that that may all be about to change with the rapid fall in oil prices. They say that the state could lose as many as 20,000 jobs by June – a worrying prediction given that there were less than 10,000 unemployed workers statewide as recently as November.

In Arizona this week, Hit & Run says that the Mayor of Glendale – the site of this year’s Super Bowl – has stated that the city is likely to lose money on the game, despite other city mayors often touting the economic benefits of hosting the competition. Staying in Arizona, The Daily Signal reports that a policy barring DREAMers (undocumented immigrants who arrived in the U.S. as children) from getting state drivers’ licenses has been struck down. They say that the judge also made it clear that the state could change its law to bar this group from getting licenses once again if it wished to.

Moving north, BlueOregon bemoans the fact that the state still cannot implement a living wage or raise its minimum wage. They say that low wage work actually costs the state in the form of housing subsidies, food aid, and Medicaid.

Last week California Senator Barbara Boxer announced that she would not seek re-election in 2016, with many suggesting that billionaire climate activist, Tom Steyer, might seek to succeed her. National Journal says on Thursday that Steyer has taken himself out of the running, but that he may also still seek elected office elsewhere – such as the Governorship in 2018. Staying in the Golden State, Flash Report argues against an increase in the state’s gas tax as being considered by State Senators. They say that for the growing poor of California, an increase in the gas tax would be ‘an economic tragedy’.

Heading out to the Aloha State, The Daily Signal says this week that according to a new report, the state’s Obamacare exchange, Hawaii Health Connector, will not be fiscally sustainable until 2022.