With American Apocalypse, Matthew Avery Sutton aims to draw on extensive archival research to document the ways an initially obscure network of charismatic preachers and their followers reshaped American religion, at home and abroad, for over a century. Elaine Housby is impressed with this readable contribution.

Matthew Avery Sutton begins his acknowledgements by saying, ‘I have spent the last seven years thinking about the end of the world’.

This sums up both the subject matter and the style of this book. It is a fascinating study of the development of the apocalyptic or ‘pre-millenialist’ strand of evangelical Christianity in the United States over the last hundred years. Sutton has produced one of those rare books that is both academically rigorous and a very good read. The subject matter invites ridicule, but he treats it respectfully, while frequently adopting a wryly humorous tone. The book draws on very extensive research and benefits further from numerous illustrations, including rarely seen cartoons from 20th century evangelical magazines.

The essence of pre-millenialist belief is that the Second Coming of Christ is imminent, that there are clues in Biblical prophecies to when it will take place, and that when it happens all true believers will be ‘raptured’ to heaven while everybody else is left on earth to endure the ‘tribulation’. Although such radical evangelicals are sometimes described as believers in the ‘literal truth’ of the Bible, this book demonstrates that their interpretations of the Bible are often far from literal. The core tenets of the apocalyptic belief system are dependent on a highly creative elaboration of a few isolated verses of some minor books of the Old Testament, notably that of Daniel, plus the Book of Revelations. Such believers describe themselves as theologically conservative, but it is clear from this history that, considered in relation to the 1900 or so years of Christian history that passed before their movement appeared, their theology is distinctly non-traditional.

Sutton explains how radical evangelical Christianity became associated with free market economics, an association now so established in the US that it is difficult to imagine it could ever have been otherwise. He elucidates both how reliance on funding from wealthy business people has had a lot to do with this and how the theology led to it. The predominant view among pre-millennialists has always been that since the world is about to end there is no point in trying to improve it. There have always been radical evangelicals who believe that their faith calls them to work for social improvement in the meantime anyway, but the defining belief of this movement is that the need to save souls takes priority over all questions of worldly welfare. Such social welfare work as is undertaken should always be linked to saving souls, which is why such Christians prefer it to be undertaken by churches rather than the government. The shorthand phrase often used by them is that Christians are called to ‘occupy this world for Christ’ while they wait for Him to return.

The defining episode in the political orientation of the movement was the election of F.D. Roosevelt as president on a platform of extensive government intervention in the economy that seemed to most evangelical Christians far too similar to the atheistic communism of the USSR. Opposition to the New Deal became a rallying point of the movement, and indeed one of its most outspoken preachers came close to identifying FDR as the Anti-Christ. (The reader comes away from this book marvelling at the ability of believers in prophecy to perceive the Anti-Christ in just about anything or anybody.) Since then this type of American Christianity has become inextricably linked with opposition to big government, high taxes and trade unionism. Though, as Sutton points out, such people have never seen any contradiction in demanding that the government intervene vigorously in the private lives of its citizens, along the moral lines of which they approve.

The late 1930s also marked the defeat of the section of the radical evangelical movement that believed political activism was inappropriate and the rise of the movement’s organised quest for power and influence. Throughout its history believers in the imminence of the apocalypse have been ‘scanning the horizon’ in an attempt to analyse how current world events align with Biblical prophecy and help them develop along the right lines. The book ends with the pre-millenialists’ achievement of influence at the very highest level of US society under the presidencies of Reagan and later the Bushes.

Support for the state of Israel has always been central, because of a belief that the return of the Jewish people to Israel is a necessary precondition of the rapture. The fact that this is accompanied by a belief that all Jews who refuse to accept Jesus as their Messiah will meet a horrible end when He returns has not prevented Jewish leaders from forming strategic political alliances with pre-millenialist Christians.

A central strength of the book is its careful analysis of racial differences and limitations within the radical evangelical movement. It was always dominated by white men and the racial divisions that became entrenched in the early part of the twentieth century are still present today. At that time preaching meetings were almost always segregated, and white evangelicalism became to a considerable extent a nativist movement of white Protestant America, hostile to immigrants (especially Catholic ones) and opposed to racial mixing. In the 1960s some of the new generation of evangelicals, notably Billy Graham, desegregated their institutions and supported the civil rights movement in principle, but their hostility to interventionist federal government severely limited their support in practice.

African-American evangelical Christians never rejected the ‘social gospel’, no matter how closely they shared the views of white evangelicals in other ways. They tended to feel that the ‘tribulation’ was a historical period they and their enslaved ancestors had already lived through, and recognised that they had much less to lose than whites from the destruction of the present world. Many African-American preachers who held pre-millenialist beliefs associated the apocalypse with black liberation; some indeed argued explicitly that it would be God’s punishment for white racism.

The book provides a clear history of the term ‘fundamentalist’. It was originally adopted by radical evangelicals themselves because of their insistence that they alone were holding firm to the ‘fundamentals’ of their faith, but when used by those who disagreed with them it acquired derogatory overtones, so it was largely abandoned by the movement itself after the 1940s. Of course the term was later extended, arguably inappropriately, to Muslims who have also developed a radically non-traditional interpretation of their faith. Sutton himself does not make this comparison, but his detailed history of an extremist form of Christianity provides a valuable counterpoint to present concerns over Islamism.

Elaine Housby
Elaine Housby has a Masters degree in Politics and Sociology from Birkbeck College, London, a Masters degree in Modern Middle East Studies from St Anthony’s College, Oxford and a PhD from the Open University for a thesis in the field of Religious Studies. She is the author of Islamic Financial Services in the UK and Islamic and Ethical Finance in the UK, both published by Edinburgh University Press. Read more reviews by Elaine. 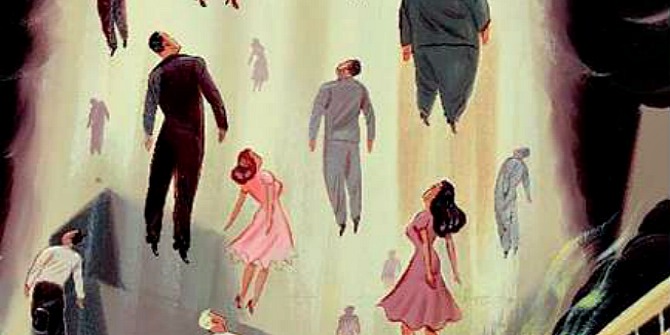