New technologies can bring new risks and challenges alongside new opportunities. Daniel Faris looks at the regulatory challenges that may be posed by the rapid development of autonomous vehicles and cars. Citing the relatively piecemeal state-by-state legislation on the use of mobile phones while driving as an example, he argues that the political process is often far behind these kinds of rapid technological developments.

It’s rare that a new technology truly threatens to fundamentally change an entire facet of American life, but we may be on the verge of just such a revolution. Make that two revolutions, actually: the world’s tech companies are in the process of pioneering wearable technology, while Google has been toiling away on their driverless cars, which may even change our lives as we know them.

Both of these technologies have the potential to be case studies in how technology can influence politics and policy. We saw it before when smartphones found their way into our pockets, our cars, and our lives. We’re now beginning to see it with the consumer-level drone industry – buy them while you can! – and we’re going to see it with wearables such as Google Glass (already banned in movie theaters due to piracy concerns) and the forthcoming Apple Watch.

Given all the uncertainty, let’s narrow down the conversation a little bit and focus only on distracted driving and its implications. Until the autonomous car revolution truly arrives, we’re going to have a lot of unanswered questions about how distracting technologies are going to fit into our daily lives.

But before we can get a sense of where we might be going, we must first see where we’ve been. Here’s what distracted driving looks like right now.

Distracted driving is a problem that transcends socioeconomic barriers, age groups, and any other demographic classification you can think of. According to Distraction.gov – the official US government website for distracted driving awareness – 3,328 people died in 2012 as a result from distracted driving. Little surprise, given that at any given moment, about 660,000 US drivers are interacting with electronic devices behind the wheel. If this proves anything, it’s how wide – and widening – the rift really is between technological progress and the policy that governs it.

Will the government need to keep an up-to-the-minute list of products that are illegal to use while driving? Will the law allow us to check the time on our smartwatches but not our notifications? At what point will we be able to trust that a given technology is “safe enough” not to pose a danger to even an inexperienced driver – if ever? And will driverless cars render this all moot?

There’s a long and colorful history of technology influencing policy, not to mention awareness of those policies. The Internet itself – particularly the rise of social media – has been nothing short of a sea change when it comes to keeping people informed and engaged in the political process. It has also brought certain seedier aspects of politics process into the light, such as rampant lobbying and campaign finance issues. In short, staying informed as an American citizen has never been easier.

But progress also asks a great deal from us in turn. Separating information from disinformation requires discernment and no small amount of research into even the smallest political issues that face us. We each must become our own news aggregators. 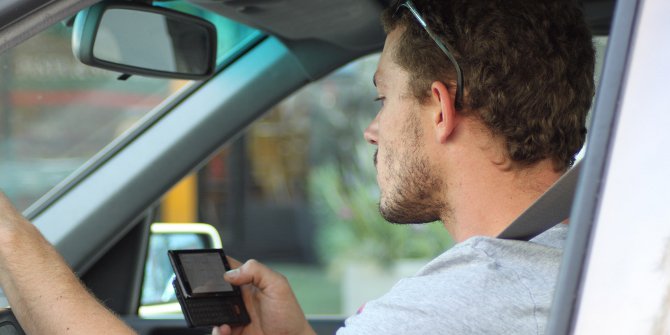 When Are States’ Rights Not Right?

But let’s get back to distracted driving. How long will it take until we get some kind of comprehensive legislation governing our use of technology while we drive?

Those who live in fear of governmental overreach likely hope it never happens, and for them there’s good news: our 50 states still have not reached a consensus on what constitutes distracted driving, nor on the appropriate punishments for those who have been found to be in violation.

In Pennsylvania, for example, where 3,331 motorists lost their lives in distraction-attributed accidents in 2011, text messaging while driving is banned under state law, while general cell phone usage is not. The state of Colorado is more complicated still; despite being home to 472 traffic deaths in 2012, they have banned cell phone usage only for drivers under the age of 18.

Does that sound unnecessarily complicated to anyone else? These laws represent a fractured front in the battle against preventable driving deaths, making it all the more confusing why so many of us still champion the sacred cow of states’ rights. Should we not recognize that distracted driving is a highly preventable cause of death that calls for a united front?

States’ rights do give the more progressive states in the Union the opportunity to lead by example, as when Massachusetts filed a suit challenging the constitutionality of the Defense of Marriage Act, or when New York instituted a statewide ban on fracking late last year. Unfortunately, that same privilege is available to states with somewhat more complicated intentions, as when Virginia challenged the constitutionality of the Affordable Care Act in Commonwealth of Pennsylvania v. Sebelius in 2010.

Moving at the Speed of Legislation

In a perfect world, the federal government wouldn’t have to promote safety by way of legislation and regulation. We could count on energy companies to seek profits using non-destructive technologies like solar or nuclear power. And, yes, we could also count on our fellow motorists to leave their phones where they belong until they get where they’re going.

I chose consumer electronics to frame this discussion because it’s one of the fastest-moving industries in the world, and one that poses a unique problem for lawmakers. New affordable technologies may represent our best and brightest hope for escaping our own worst instincts (again, the wait for the Google Car is beginning to feel interminable), but the political process seems to frequently be a day late and a dollar short to deal with these developments. We have yet to see how the government will deal with the impending rollout of autonomous cars. Their potential to make us safer and more productive is almost too great to fathom right now – the only question is whether we’ll be ready to greet them with a logical, nationwide policy or whether they’ll be mired in red tape for ages. For now, they remain legal for road use in just four states, while individual counties are now beginning to issue their own laws on the subject, further complicating the issue.

In short, it’s become clearer than ever that our political process has grown much too bloated and cumbersome to effectively and appropriately respond to significant shakeups as they happen. Then again, the glacial speed of American legislation might be an advantage given the importance we place on favor scientific due process and productive discourse. Maybe we’ve simply approached the moment where our grasp of technology is finally outpacing our skills at governing ourselves; perhaps in time we’ll even see sweeping changes in the way policy is written in this country – changes that would render our government unrecognizable.

Until then, we’ll keep living in the gray area between progress and policy.