If preschools are to level the social class playing field, they must prevent four year old children and their teachers from tilting it.

If preschools are to level the social class playing field, they must prevent four year old children and their teachers from tilting it.

The 2016 budget, announced by President Obama last week, includes a push for universal preschool, which would focus on children from poor and middle-income families.  While Jessi Streib welcomes the President’s proposal, she warns that it may end up reinforcing the inequality and class privileges it is attempting to prevent. Drawing on her research observing high quality preschools, she argues that teaching techniques favor children from privileged backgrounds with large vocabularies.  For Obama’s pre-K plan to be effective, school practices which benefit the privileged must be addressed as well.

Four-year-old children are affected by a playing field that advantages children with social class advantages. Children also affect the playing field – inadvertently funneling greater privileges to the privileged. President Obama’s proposal for universal preschools must contend with these facts or risk inscribing the very inequalities it tries to prevent.

In different class contexts, each style helps children navigate their social environment. The trouble occurs when schools and teachers do not recognize these differences but implement rules and informal practices that reward the language styles used by children from privileged classes. 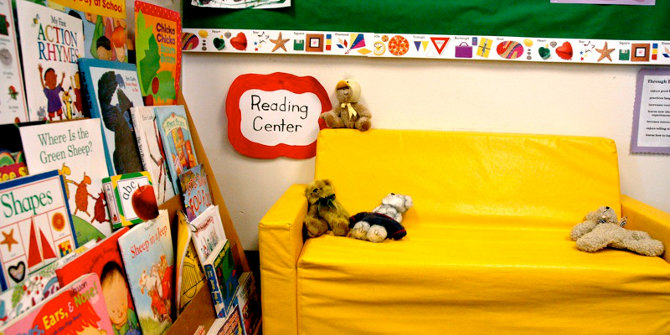 My research suggests that this is exactly what happens in preschool classrooms. I spent an academic year observing at a high quality preschool – one that often serves as a model of superior preschool education. It was a preschool that charged professional parents more in tuition than did the nearby university, and one in which the state gave a full scholarship to poor and working-class children. Children from different social classes then learned together side by side, having access to the same high quality teachers, curriculum, and resources.

This was a preschool, like many others, where teachers repeatedly told children to “use your words.” When there was a dispute between two children, teachers bent down to children’s level and helped them negotiate a solution. When children were hurt or in need, teachers expected children to approach them and ask for help. When children blurted out an answer rather than waiting to be called on, teachers considered them enthusiastic learners. These practices seemed neutral, but they weren’t. The 30 million word gap, varied experiences with negotiating, and class differences in how to talk to adults meant that each practice favored the children with more class privilege. When teachers helped children negotiate, the upper-middle-class children, who knew more words and had more practice negotiating, almost always won. When needs went unmet they were the needs of the less privileged children, as teachers assumed that if children wanted help they would ask for it. When teachers ignored quietly raised hands, they were the hands of working-class children. When teachers attended to the children who blurted out answers, they directed their attention toward the children with the most class privilege.

The children were not entirely innocent either. Privileged children called teachers’ attention away from less privileged children and onto themselves. They used their words to win disputes, not seeing the rules of the negotiation as rigged in their favor. Neither the children nor the teachers were particularly aware of which children were from which class and they were not intentionally biased. Yet the result was the same: privileges for the class privileged.

My research cannot reveal the long term effects of the practices I witnessed, but my hunch is that they matter. The unattended tears and forlorn faces of students who lost a negotiation implied that they learned that school was not a place they were treated as equals or where their needs were met. The extra attention directed at the more privileged children allowed them to hear more words, further their negotiation skills, and learn more from the teachers. It also took attention away from the less privileged students – those who had a greater need to build their vocabularies. The rewards accorded to privileged children’s language style also do not disappear when children enter elementary school, but are often repeated and reinforced through similar practices.

President Obama’s call for universal preschools must recognize the power of preschools to maintain the unequal playing field as well as level it. High quality preschools do have the potential to lessen inequality. However, if implemented in a way that avoids the practices mentioned above, their power to do so would magnify. Universal preschool is a step in the right direction; implementing school rules and practices that do not privilege the privileged is the next step.

Jessi Streib is an Assistant Professor of Sociology at Duke University. Her research uncovers mechanisms and builds theories about how social class inequality is experienced, reproduced, and alleviated. Her new book, The Power of the Past: Understanding Cross-Class Marriages, builds a theory of how love crosses class lines, uncovers a new way that culture systematically varies by class, and demonstrates that the class does not come out of the person after the person comes out of the class. Her articles illuminate how childrearing strategies vary by parents’ class background and how four-year-old children engage in class reproduction.