Do police officers and residents have different perceptions of crime and cohesion in urban neighborhoods? In new research, Rachel E. Stein and Candace Griffith find resident observations of neighborhood measures are relatively consistent across three urban neighborhoods in a Midwestern city. Police perceptions of their relationship with residents and the close-knit structure of the community, however, are more positive in the primarily white neighborhood that has an active crime prevention program. The results suggest that what officers see on the “surface” of the neighborhood is driving overall perceptions, while underlying problems are secondary. Differences between resident and police perceptions can influence the success of crime prevention strategies employed in community policing.

The crime prevention strategies associated with community policing would be most useful in high crime neighborhoods, but residents in these areas are the most resistant to such programs. Residents in high crime areas generally distrust the police and do not see the benefit of community programs. Neighborhood residents are likely to consider the programs implemented by police departments ineffective to control crime problems in the community. One reason for this is that residents’ perceptions of the neighborhoods are grounded in their everyday lived experience, while the viewpoint of police officers is characterized as that of an outsider.

Residents’ perceptions are what we would expect in high crime neighborhoods. Residents report moderate levels of neighborhood cohesion and moderate levels of fear of crime across all three neighborhoods. The majority of residents report crime is a problem in their community. We find a larger proportion of people who live in Saints Village consider crime to be a problem as compared to the other two neighborhoods. This is not unexpected, as Saints Village is most at risk of crime and disorder according to the demographic characteristics of the population. The community members have a low median income, a high rate of unemployment, and a large proportion of the neighborhood is comprised of renters—representing a transient population. The population in Saints Village also has a high percentage of males and a large proportion of adolescents. All of these characteristics are indicative of high crime areas. 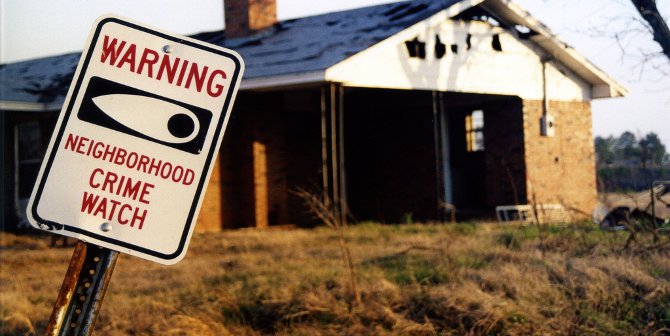 We might expect police perceptions of the neighborhoods to reflect the same pattern, identifying Saints Village as the most problematic crime-ridden area. This, however, is not what we find. The police officers report Saints Village and Mountain Top share similar characteristics. The majority of officers identify both of these neighborhoods as high crime areas characterized by poor relationships between police officers and residents. In contrast to resident perceptions, the Shoreline neighborhood is unique according to the police surveys. In fact, officers report residents in Shoreline represent the most cohesive community. Over half of the officers also report they feel respected and have a good rapport with the residents in Shoreline.

In efforts to explain the pattern in police responses, we first turn to the demographic composition of the neighborhoods. All of the neighborhoods in this study are characterized as high crime and high disorder areas; however, Shoreline is the only neighborhood in this study with a majority of white residents. The effect of race on neighborhood crime is often linked to elements of inequality or neighborhood disorganization, but the perception of a causal link between race and crime still stands. The police perceptions of Mountain Top and Saints Village as unsafe and characterized by poor relationships between police and residents suggest race might be a factor.

Another unique feature of Shoreline is this neighborhood was the only community with an active federally funded crime prevention program in place at the time of data collection. The presence of the program can contribute to the positive perceptions held by police officers. Residents in neighborhoods with crime prevention programs are more likely to be supportive of the police. This is especially true in communities where whites compose a greater proportion of the population, as in Shoreline. This reflects the greater number of officers who indicate that they have a positive relationship with residents; however, it is important to note that the program does not reduce residents’ perceptions of problems in the neighborhood.

Successful crime prevention strategies can only be implemented when police officers and residents work together to identify problems in the neighborhood. Police officers need to move beyond their outsider perspective of the neighborhood to understand the underlying needs of the community. A training program that incorporates multicultural awareness represents an effective strategy for officers to recognize different perspectives of neighborhood residents. This type of training can also help the officers establish the legitimacy of the police force in the community. Legitimacy is the first step for police to take the lead and help residents who view crime as a big problem and have high levels of fear of crime mobilize to community action.

This article is based on the paper, ‘Resident and Police Perceptions of the Neighborhood’ in Criminal Justice Policy Review.