Federally-funded Community Health Centers (CHCs) today provide primary care and medication on a sliding pay scale to more than 20 million Americans. In new research, Martha Bailey and Andrew Goodman-Bacon show CHCs had large effects on health at relatively modest costs. The establishment of this program in the 1960s resulted in sharp and persistent reductions in age-adjusted mortality rates–effects concentrated among the most disadvantaged Americans.  Reductions in mortality rates through this expansion cost one third to one eighth what the same mortality reduction cost through Medicare.  These findings bode well for the current expansion of the CHC program under the Affordable Care Act.

In 1965 policymakers began a bold experiment in the provision of health care to the poor. Unlike the era’s large public insurance expansions that subsidized the purchase of health care from private providers (Medicare and Medicaid), Community Health Centers (CHCs) used federal funds to deliver care directly to poor populations at comprehensive primary care facilities. From the outset CHCs sought to increase the availability and convenience of care while reducing costs to patients. They charged on a “pay as you can” sliding-scale for services and medications, located in disadvantaged neighborhoods, and offered home visits and transportation to appointments.

In the past 50 years CHCs have survived and proliferated. By 2008, more than 8,000 CHCs operated across all 50 states and served over 20 million Americans.  The 2010 Affordable Care Act (ACA) appropriated an additional $11 billion to build new centers and expand existing CHC infrastructure. Rationale for this expansion included the widely-held belief that CHCs both improved access to primary care and curbed costs.

In recent research, we test this assertion using the introduction of CHCs between 1965 and 1974.  This period presents a unique opportunity to estimate CHCs’ causal effects on health, because CHC funding appears nearly randomly allocated.  This natural experiment in War on Poverty funding reflected the need for administrators to quickly implement a widearray of local programs.  In the context of CHCs, the timing of CHC grants was not correlated with a wide range of county characteristics, such as mortality rates in 1960. CHC establishment was also not associated with increases in funding for other War on Poverty programs or growth in local hospital capacity.  Using variation in the start date of over 100 CHCs in the 1960s, we use an event-study research design to isolate the effects of CHCs (from a range of other alternative factors) on county-level mortality rates up to 15 years after CHCs began operating. 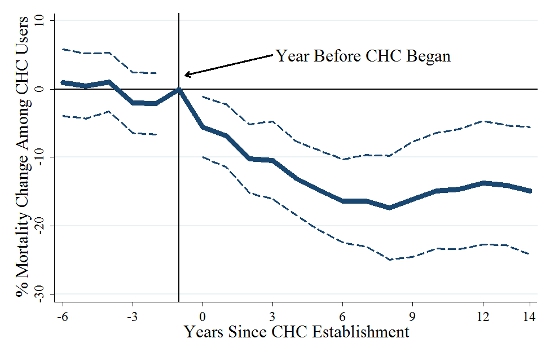 Notes: The figure plots the estimated effect of CHC establishment on mortality rates for those 50 and older, divided by the share of the population estimated to have used CHCs within 5 years (11 percent) and also divided by the estimated mortality rate for poor adults over 50 in 1965, 4,127 deaths per 100,000 people. The dashed lines are 95-percent confidence intervals. The vertical line represents the year before counties received their first CHC grant.

The results show that one decade after CHCs began, overall county-level mortality rates declined by 2 percent.  As Figure 1 shows, the biggest contributors to this decline were CHC patients ages 50 and older, whose mortality rates fell by 7 to 13 percent.  These reductions in mortality rates resulted primarily from the prevention of deaths due to cardiovascular-related causes, such as heart attacks and strokes.  CHCs’ low-cost provision of new, effective, anti-hypertension medication paired with their patient-centered, convenient locations are likely explanations. Survey data from the time show that the proportion of poor, older adults in CHC-served locations who reported a “regular source of care” increased by 23 percent between 1963 and 1970, while out-of-pocket drug spending fell.  Notable is that a regular source of care is a stronger predictor of positive health outcomes than having health insurance.

Importantly, CHCs’ largest effects on mortality occurred among individuals eligible for Medicare, begging the question of whether Medicare was actually the driver.  The data make a persuasive case that the answer is “no.”  Total per capita medical spending and per-enrollee Medicare expenditures show no trend breaks corresponding to the CHC start date. This implies that individuals 65 and older had access to Medicare before and after CHCs began and that CHCs themselves drove the reductions in mortality rates (not the reverse).  Another interesting finding is that CHCs appear to reduce Medicare enrollment, which is consistent with some elderly patients using CHCs rather than hospitals.

An important question is how much this natural experiment from the 1960s tells about the effects of the current CHC expansion under the ACA.  We show that CHCs opening later in the 1970s had smaller effects on outcomes.  The explanation for this finding appears to reflect that fact that 1975 legislation changed the funding process to favor more rural areas. Unlike their earlier urban counterparts, rural CHCs struggled to staff their facilities and to reach highly dispersed populations. Low population density also limited spill-overs and externalities.

These findings provide an optimistic forecast for the current expansion of the CHC program under the ACA. Even with the smaller effects in rural CHCs, CHCs’ health effects appear to have outlasted both the initial enthusiasm of War on Poverty advocates and multiple, subsequent administrative changes in the program. 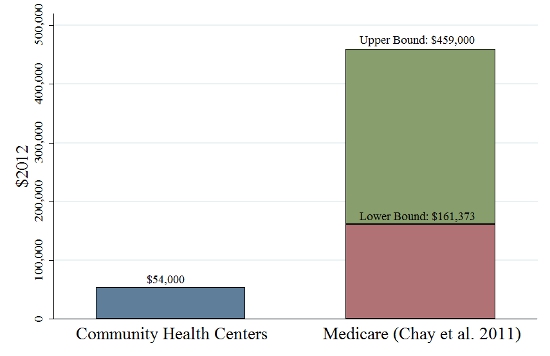 Notes: The figure shows ratio of total public expenditures on each program in the years after their establishment to the number of life-years saved. The estimates for Medicare are the authors’ calculation from the treatment effects in Chay et al (2011) and administrative data on Medicare costs. The lower and upper bound are based on the assumption that the estimated mortality reductions at age 65 apply to only those ages 65-69 (upper bound cost estimate) or everyone over 65 (lower bound cost estimate).

Figure 2 shows that CHCs achieved these reductions in mortality at very low cost. This study’s results show that CHCs saved 81,644 lives of those 50 and older within the first ten years of operation at a total program cost of roughly $4.4 billion (2012 dollars). This yields a cost-per-year-of-life ratio of approximately $54,000. By comparison, Medicare’s cost-per-year-of-life ratio at implementation in the 1960s ranged from $161,373 to $459,000. To the extent that CHCs improved health and quality of life in other ways, these estimates understate the program’s cost-effectiveness.

But even these conservative cost ratios suggest that CHCs achieved their primary objective of improving health at much lower cost than larger public insurance programs—especially for the elderly. Whether CHCs’ health benefits remain this large today and whether CHCs benefited the non-elderly remain important areas for future research.

This article is based on the paper, “The War on Poverty’s Experiment in public Medicine: Community Health Centers and the Mortality of Older Americans,” in the American Economic Review.

Martha Bailey – University of Michigan
Martha Bailey is an Associate Professor in the Department of Economics and a Research Associate Professor at the Population Studies Center at the University of Michigan. She is also a Research Associate at the National Bureau of Economic Research, a Research Affiliate at CESifo, and an IZA Research Fellow. Her research focuses on issues in labor economics, demography and health in the United States, within the long-run perspective of economic history.

Andrew Goodman-Bacon – University of California, Berkeley
Andrew Goodman-Bacon is a Robert Wood Johnson Health Policy Scholar at the University of California, Berkeley. His research focuses on the health and social policy reforms of Lyndon Johnson’s Great Society.  His work combines historical data collection methods with econometric program evaluation techniques to provide new evidence on the effects of these policy changes of program participation and health.