In recent decades, U.S. states have embraced a number of different economic and social policies, depending on which party – Republican or Democratic – controls the government.  David Wise examines the effectiveness of states’ differing approaches to policy by comparing their ranking across two dozen indices. He finds that due to higher levels of investment and fewer ‘culture war’ wedge issues, blue – or Democratic – states tended to score higher than their Republican counterparts in terms of economic strength, levels of social cohesion, and importantly, the state’s net Federal fiscal position.

One of the advantages of a federal system such as the United States, as Justice Louis Brandeis observed in 1932, is that the states can serve as testing laboratories for policies and innovation.  As states experiment with varying policy ideas the outcomes can be observed, measured and evaluated – somewhat in the same manner as performed in actual science labs.  Things that work should be embraced and those that do not — discarded.  This is all just a manner of common sense used in everyday life.  Colleges make admission decisions based on past academic performance.  Coaches are selected on their past winning percentages.  Executives are recruited on their track records for creating value.  In making the selection of a restaurant one recalls the experience from past meals.  “Past performance,” as the familiar financial disclosure goes, “may not guarantee future results,” but it would be illogical not to take it into account.

The political system in the United States is composed of two dominant parties whose policy views have become more divergent over the past several decades.  In addition, the adherents of the two parties are not uniformly distributed across the various states but are very concentrated in what have come to be known as red states which vote predictably for conservative candidates and blue states which vote for liberal candidates.  This fact, while unfortunate in terms of having the type of competitive races that classical images of democracy envision, is fortunate from the perspective of the states functioning as policy testing laboratories.

In new research, we categorize the states based on voting patterns and make comparisons to test the effectiveness of differing approaches to policy. We can classify states in this way by determining the popular vote percentages for presidential elections since 1988 and the percentage of time a state voted for one party over the other.  Special weighting was given to the two most recent presidential elections.  This resulted in twenty-four states being classified as red states, eighteen classified as blue states and eight states that did not predictably fall into one camp or the other which are known as “swing” or, more recently, “purple” states.

States do not and, under the Constitution, cannot practice foreign policy, but they are very active in economic or commercial policy as well as in areas that affect social policy.  The respective performance of the states in these latter two policy areas can and should be compared now that control of both houses of Congress has been taken by members from red states that now will presumably want to do at the national level what they have done in their respective states.  In order to make these comparisons two indices were developed taking the simple ranking (1 through 50) of the states in regards to around two dozen factors.  No qualitative or subjective judgment was used in the scoring.  It was just a matter of simple ranking.  An Overall Economic Strength Index was based on each state’s performance for positive economic outputs in areas such as the following: per capita income, median household income, household net worth, the poverty rate, economic growth and jobs added over recent years, labor force participation, the human capital index, entrepreneurial activity, patents generated and manufacturing value-added.  A Social Cohesion/Dysfunction Index was designed to measure the quality of life and social cohesion in each of the states. This index included: life expectancy, infant mortality, literacy, the human development index, and the rates of drunken driving deaths, violent crime, teen pregnancy, divorce, incarceration, child abuse, domestic violence deaths and drug deaths.  The averages for red, blue and purple states can then be compared to see the relative performance of the groupings of states and to discern whether there are meaningful differences.  Although the sample sizes are different s any statistical bias in one direction is offset in the opposite direction, but the picture is the similar even if using median or the average of randomly selected pools of eighteen red states. 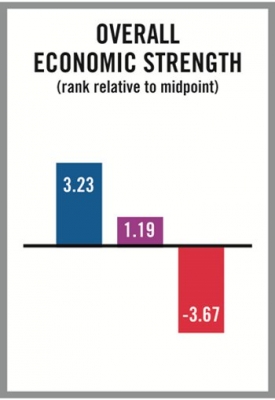 Economic Strength Ranking Results: Out of the top ten ranked states for economic strength there were four blue states, three red and three purple.  Out of the bottom ten ranked states there were one blue, eight red and one purple.  Perhaps the most interesting observation was that on this index the highest rated state was also the reddest, Utah, while the second highest ranking state was the bluest state, Massachusetts.  The top ten were: Utah, Massachusetts, Colorado, Minnesota, Maryland, North Dakota, Washington, Nebraska, New Hampshire and Virginia.    Although some red states, such as Texas, have experienced admirable job and economic growth in recent years and scored highly in those rankings, as Figure 1 shows, as a group they often had offsetting low scores in terms of the average incomes and household net worth and often lagged in such wealth creating attributes as patents generated, skilled workforce and the like.  Often these states pursue low tax strategies which is may be good for relocating successful companies into the state, but, if not accompanied by greater investment in skilled workforces and research universities, may be akin to serving a great feast by eating next year’s seed corn.  Yet, these states help impose a positive discipline nationally on state and local tax rates as every jurisdiction needs to strike a balance between incentives and investment. 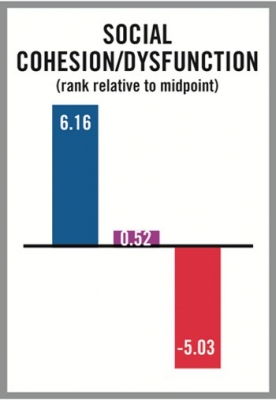 Social Cohesion/Dysfunction Results:  As Figure 2 shows, the contrast among the three groups of states on quality of life and social cohesion factors was particularly stark.   This result and the very low ratings of many of these states on criteria related to social dysfunction is ironic given the fact the many conservatives have used social issues in the so-called “culture war” as wedge issues in elections and as part of their formula for electoral success.  Yet, some of these red states rank uniformly at or near the bottom across the entire range of social factors.  When held up against the rankings it appears to be a case of do as we preach, not as we do  Against this index six blue states ranked in the top ten along with two red states and two purple states.  No blue state scored in the bottom ten on this index although two purple states and eight red states did.  Interestingly, on this index the reddest state and the bluest state, Utah and Massachusetts came in again ranked next to one another.  On the Social Cohesion scale the top ten states were: Minnesota, Vermont, New Hampshire, Iowa, Utah, Massachusetts, North Dakota, Wisconsin, New Jersey and Connecticut. 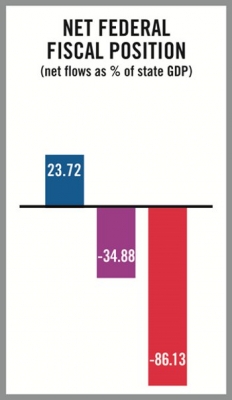 Net Federal Fiscal Position: A final comparison among the three groups of states can also be made showing the net fiscal flows between the federal government and the states – the averages rankings across the groups of states are shown in Figure 3.  This comparison is particularly relevant because two times — in 2011 and 2013 – conservatives in Congress came close to putting the United States into financial default over complaints about federal spending.  The comments by the Republican standard bearers in the 2012 presidential election about the country being divided between “makers and takers” is sadly ironic because it is the blue states that on net contribute financially into the federal system on a net basis while the red states are the larger beneficiaries of massive net financial flows from the federal government with net transfers, on average, equal to 86.13 percent of their state economies (GDP).

The fiscal deficits of the country are not quite as ominous as the above graph appears as  several of the blue states that are net payers into the system include some very large states whose annual dollar contribution into support the national system are much larger than the above net positive percentage would suggest.  On the other hand many of the red states are small, rural states who, in spite of their small populations still send two senators equal in voting power to the senators from California, a blue state with a population of 38 million and a net positive transfer to the federal system of $1.8 trillion.  Eight of the top ten percentage net positive payers into the federal system are blue states along with one red state and one purple state.  The bottom ten includes two blue states, eight red states and no purple states.  The top ten contributors to the national government on a percentage basis are: Delaware, Minnesota, New Jersey, Illinois, Connecticut, New York, Ohio, Michigan, Nebraska and Massachusetts.

No one state or no one grouping of states is perfect or has all of the answers, but by and large, across all of these scales, the red states as a group lag significantly behind both the purple and blue states.  This fact should be weighed when conservatives from red states seek to block reasonable national policies or to impose on the national level policies which clearly are not working back home.  Yet, as laboratories for reasonable experimentation, states that have scored well should be studied.  Only five states scored at the top in both the economic and social cohesion indices: Minnesota, Utah, Massachusetts, New Hampshire and North Dakota.  That is two blue, two red and one purple.  When including net fiscal flows into the mix only two blue states Minnesota, clearly the highest, and Massachusetts scored in the top ten across all three indices with Nebraska being the highest ranked of the red states across all three.  The blue states generally have higher tax rates but this appears to be accompanied by investment in education and other factors that seem to stimulate higher rates of income, wealth, innovation and social cohesion.  Even deep red Utah sets itself apart in areas such as one of the most generous policies for the homelessness in the nation.

As stated above, taxes should be no higher than necessity, but the concept of return – investment in infrastructure and a skilled workforce as examples – should be taken into consideration, rather than a race to the bottom in terms of nominal tax rates.  If lower tax rates were the one sure path to prosperity then the world’s two lowest ranking economies according to the World Economic Forum – Chad and Guinea – would be economic powerhouses with taxes of just 4.2 percent and 8.2 percent of GDP instead of the two countries rated as having the most competitive and the most innovative economies – Switzerland and Finland – which come in at 29.4 percent and 43.6 percent.

David W. Wise
David Wise is a businessman residing in Annapolis, Maryland. A frequent commentator on public policy, he holds an MALD from The Fletcher School of Law and Diplomacy at Tufts University. Now an independent, he was three times elected a delegate to the Democratic National Convention, beginning in 1972.