Most Americans are now opposed to laws against interracial marriage, but their behavior does not yet reflect these attitudes.

Most Americans are now opposed to laws against interracial marriage, but their behavior does not yet reflect these attitudes.

Since 1960, the number of interracial marriages in the United States has increased significantly from 0.4 percent to 7 percent of all marriages in 2010.  Such changes are likely attributable to rising rates of approval for interracial unions and associated improvements in race relations. However, the relatively low share of interracial to same-race marriages may be reflective of persistently negative attitudes which are further reflected in people’s social behaviors.  Thus, in new research, we focus on the true nature and persistence of racial bias by examining people’s feelings about laws that restrict interracial marriage as well as their responses to whether or not they have shared a meal with a member of the opposite race in the past year. Using nationally representative survey data spanning nearly 25 years, we show that attitudes have changed tremendously, but associated behaviors lag behind.  And for some groups, little change has occurred over time.

Interracial Marriage in the U.S.: Past and Present

Anti-miscegenation laws were declared unconstitutional in the Loving v. Virginia case in 1967, in which the U.S. Supreme Court found that Virginia’s laws banning interracial marriage violated the right to due process and equal protection on the part of the state. Since then, attitudes toward interracial marriage have shifted dramatically, and there is overwhelming opposition to any laws that restrict marriage between members of different racial groups.  In fact, over one third (36 percent) of respondents favored laws against interracial marriage in 1972, but less than 10 percent supported such laws in 2002.  Similarly, information gener­ated from recent survey research demonstrates that the majority of Americans (63 percent) say they “would be fine” with a family member marrying someone from any of the three major racial and ethnic groups (Asian, Hispanic, African American).

But, American society continues to use race as a key identifying factor, and even after 40 years, interracial marriage is relatively uncommon.  Furthermore, Black-White marriages represent the smallest percentage of all interracial unions, and it should be noted that among those who indicated openness to interracial marriage among family members – levels were lowest for marriages to African Americans.  Since interracial marriage can be seen as a barometer for race relations in that it represents the least amount of social distance between groups; the relative lack of approval for (and lower incidence of) Black-White unions indicates a persistent set of barriers to Black assimilation that may be reinforced by certain behaviors.

Differences in Attitudes and Behaviors

To consider how social behaviors may or may not reflect attitudes, we used data from the General Social Survey to develop four combinations of responses to questions on people’s feelings about laws restricting interracial marriage and whether they had shared dinner at home with a member of the opposite race.  These categories were ordered to represent an increasing level of prejudice (those who opposed laws restricting interracial marriage and shared a meal ranked lowest while those who supported such laws and did not share a meal ranked highest).  Figure 1 shows the distribution of these categories over time.  Increases in the number of Americans in the lowest category of racial prejudice are observed over time (17 percent – 38.5 percent), while a substantial decrease in the size of the group reporting the highest level is observed (35-10 percent).  Interestingly, the number who support anti-miscegenation laws but shared a meal has remained relatively constant at about 3 percent.

Figure 1 – Changes in Attitudes and Behaviors Related to Interracial Marriage, 1973-1996 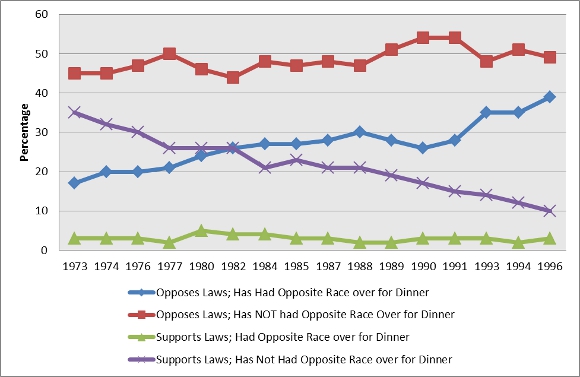 To understand what may have influenced variations in these outcomes, we studied the effects of a number of factors (outcomes were modeled using generalized ordinal logistic regression).  Specifically, we found higher levels of prejudice in older individuals, Whites, members of the lower class (self-identified), Protestants, and those who lived in the South.  Levels were also higher in earlier survey years than in more recent ones.  Education emerged as a strong predictor of racial prejudice, and as expected, those with higher levels of education exhibited greater likelihood of shared meals and far less support of laws against interracial marriage.  Importantly, closer examination of the outcomes related to race revealed that Whites had generally higher levels of prejudice and were especially more likely than other groups to support laws against interracial marriage.  Alternately, Blacks were most likely to be in the lowest category for racial prejudice and those in the “other” category fell somewhere in-between.

Understanding the Relationship between Attitudes on Interracial Marriage, Social Distance, and Race Relations

The differential assimilation perspective provides a mechanism through which to understand the relatively low level of interracial marriage and how associ­ated behaviors operate to maintain existing structures. Specifically, dominant group members (Whites) are more likely to support mechanisms, i.e. laws that restrict interracial marriage, and engage in behaviors that prohibit Black assimilation, while Blacks are most accepting of interracial unions and engage in behaviors that reduce social dis­tance, i.e. shared meals with a member of the opposite race. In addition, those who perceive direct competition with Blacks socially and economically are more likely to support laws against interracial marriage as well as maintain greater social distance. Finally, cultural shifts in perceptions and behaviors surrounding interracial marriage are connected to greater acceptance of changes to existing structures in younger individuals.

Accordingly, the outcomes we observed generally confirmed expectations, and overall, we observed some dramatic shifts in both atti­tudes and behaviors surrounding interracial marriage patterns over time. Social acceptance of interracial marriage has increased substantially. Similarly, increasingly more Americans reported having a member of another race over for dinner over the study period.  However, the gap between attitudes and behaviors suggests that racial bias persists, and there exist some marked distinctions by race, education, age, class, and region.  Thus, despite some meaningful increases in the number of Americans reporting the lowest level of racial prejudice, a great deal of room for improvement remains.

This article is based on the paper, “Attitudes Regarding Laws Limiting Black-White Marriage: A Longitudinal Analysis of Perceptions and Related Behaviors”, in the Journal of Black Studies.

Ginny E. Garcia – Portland State University
Ginny E. Garcia, Ph.D. is an assistant Professor of Sociology at Portland State University.  Her work focuses broadly on health disparities, and she is particularly interested in the effects of racial discrimination. In current projects, she is investigating the role of race and ethnicity in producing disparate outcomes in health care access, quality, and various health issues.