Ignore the vetoes, and forget about Coalitions of the Willing: How the U.S. can achieve higher levels of foreign public support for its military operations.

Ignore the vetoes, and forget about Coalitions of the Willing: How the U.S. can achieve higher levels of foreign public support for its military operations.

In the early 2000s, the US gained a great deal of foreign criticism over its military operations in Iraq, and later, Afghanistan. But what determines whether the foreign public will support such interventions? In new research which uses survey research based in Japan, Atsushi Tago finds that the use of force in the Middle East by the US is most likely to be supported by foreigners when it also has the approval of the United Nations Security Council, and that much of that support continues even if the UN resolution is vetoed by Russia and China. Significantly, they also find that when the US forms a friendly ‘Coalition of the Willing’, this does little to increase foreign support for military actions.

In order to increase foreign public support for its military actions, the US government has often tried to obtain supporting UN Security Council (UNSC) resolutions.  In recent survey research based in Japan, we find that not only that UNSC resolutions increase levels of support, but also that resolutions which failed due to a Chinese or Russian veto will still secure high levels of support for the use of force.  But if a draft resolution is withdrawn, then public support falls. Foreign public opinion gives an ‘A’ for diplomatic effort when the US at least tries to pass a resolution; self-withdrawal is the worst case for the US.

The US has also formed coalitions of friendly states in order to strengthen its overseas image.  A surprising finding of our research is that these coalitions of the willing (i.e. multinational forces) do not significantly increase the positive perception among the Japanese general public for American military action.

With Maki Ikeda of the University of Tokyo, I have conducted multiple survey experiments in Japan by using two hypothetical scenarios of American ground and naval military operations in the Middle East. One scenario was that a dictator in the fictitious oil-rich state of Country A had responded to a recent democracy movement by ordering mass killings.  This led to refugees leaving the country, increased oil prices, and the destabilisation of the entire Middle East region.  Survey respondents were told that the US had asked the UNSC to adopt a resolution to “take all necessary measures” to stop the killing and restore peace and security. They were then asked whether they supported such action on a 1 – 4 scale (one being “oppose” and 4 being “support”). Another scenario was based on a fictitious act of piracy, which would lead to calls for a naval operation.

The reason we chose Japan as a field of the experiment is because of its famous peace constitution and its overall anti-war sentiment.  We can reasonably make the assumption that the Japanese general public will have lower levels of support for military action in general; therefore, if a UNSC resolution and coalition lead to a higher level of support, it will be easier to see the difference in support levels than it would in other countries.  Also, it is important to note that Japan is one of the most staunch allies for the US with the shared culture of liberal democracy and open economy after World War II.

Figures 1, 2 and 3 show our key findings. On the one hand, if the resolution was passed unanimously, passed with abstentions, or even vetoed by Russia or China, levels of support for military action remained constant. On the other hand, if the US withdrew its resolution, then levels of support diminished (see Figures I and II).  Furthermore, as Figure III suggests, level of support increase notably if the UNSC gives its approval. Coalition forces, however (i.e. operational multilateral (OM) military actions), do not significantly change Japanese perceptions.

Figure 1: Level of Support for US Use of Force: counter-piracy operation scenario 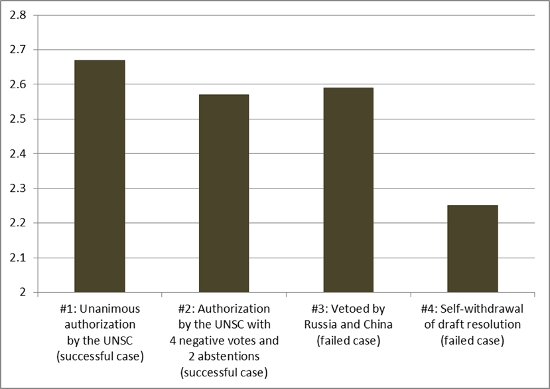 Figure 2: Level of Support for US Use of Force: regime-change operation scenario 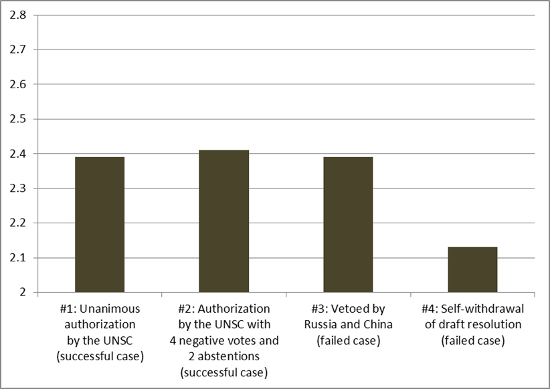 Figure 3: Level of Support for US Use of Force: Diplomacy (DM) versus Coalition (OM) 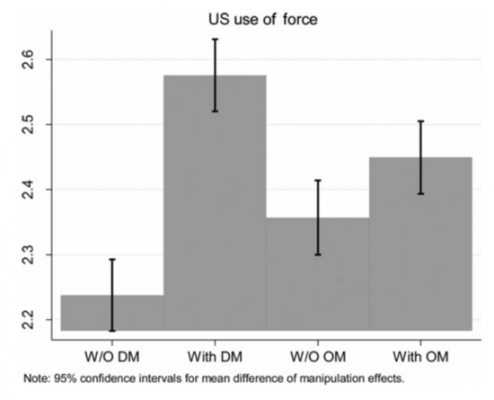 With our follow-up research as a part of the CROP-IT (Collaborative Research Of Political Information Transmission) project funded by the Japan Society for Promotion of the Science (JSPS), we are finding out more about the nature of UN approval; the latest survey experiment reveals that UN authorization changes the perception of political legitimacy. However, it does not change Japanese public perception with regard to cost, legality, expected duration of the use of force, or outcome of the military action. To generate friendly public opinion in allied nations like Japan, it is important for the US government to avoid bypassing the UN Security Council from the start and to make sustained efforts to garner the approval of the Council until it is either formally approved or rejected. The US government could obtain better support when China and Russia cast their veto than when it bypasses the UN Security Council. Furthermore, the general public in allied nations such as Japan may not be so supportive to US military action simply because there are more flags. In particular, for Japanese audience, the UN diplomatic process matters more to decide if they support American use of force than the number of flags behind the US.

This article is based on the papers ‘An ‘A’ for Effort: Experimental Evidence on UN Security Council Engagement and Support for US Military Action in Japan’, in the British Journal of Political Science, and “Winning over foreign domestic support for use of force: power of diplomatic and operational multilateralism” in International Relations of the Asia-Pacific.

Atsushi Tago – Kobe University
Atsushi Tago is a professor of International Relations at the Graduate School of Law, Kobe University (April 2015-). His main research interests are American use of force, scientific analysis of military coalitions, multilateralism, and public diplomacy. His research has been appeared in journals including Armed Forces and Society, British Journal of Political Science, Conflict Management and Peace Science, International Relations of Asia-Pacific,and Journal of Peace Research. The author thanks the JSPS (Japan Society for the Promotion of Science) and the Suntory Foundation for financial aid for the research.