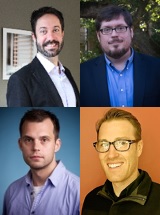 Since it premiered in 1996, Fox News has become the most watched cable news network in America, pushing forward a partisan view which has been critical of President Obama and the Democratic Party. But does Fox News actually influence the way that we are governed? In new research which examines how House members vote, Kevin Arceneaux, Martin Johnson, René Lindstädt and Ryan Vander Wielen find that when Fox News is available in members’ constituencies, they are more likely to adopt more conservative policy positions – whether they are Republican or Democrat. They also find that this effect is most pronounced around election time, and is nearly nonexistent immediately after elections.

In his Talking Points Memo television program, Bill O’Reilly of Fox News’ O’Reilly Factor frequently chastises politicians for their policy stances in an attempt to “keep them honest”. The success of his show is not necessarily a sign that O’Reilly’s attempt to keep politicians honest is working, only that his audience likes what he is doing. And research has shown that what the audience likes about O’Reilly is precisely that he provides his partisan views of political events, rather than simply reporting on the facts. The question remains whether his views are filtering through to the politicians that he is targeting, and whether they are behaving differently as a result. Of course, The O’Reilly Factor is just one prominent example of a partisan news program, and the same question can be asked about other Fox News shows or similar partisan news on the liberal side of the spectrum.

In a recent research we tackle this question about the potential influence of partisan news media on the behavior of politicians. In particular, we are looking at the effect Fox News has on members of the U.S. House of Representatives. We are able to identify this effect thanks to the incremental roll out of Fox News in the late 1990s. In particular, when Fox News was first introduced in 1996, not all cable providers around the country carried the channel. In fact, it took until 2002 for Fox News to be available nationwide.

Equally importantly, the incremental roll out was not motivated by the political characteristics of the various media markets. As such, the roll out came very close to a natural experiment, where some media markets were treated with the introduction of Fox News at its inception, while others were not. Because of this quasi-random roll out (assignment), we can compare legislators who represented media markets that had Fox News to those that didn’t and attribute any effect on legislative behavior to the presence/absence of Fox News. Moreover, since ultimately all media markets were exposed to Fox News, we can also trace the changes in behavior of individual legislators over time and as a result of the introduction of Fox News.

Our analysis of votes in the 105th–107th Congresses (1997–2002) that divided the major parties, which are those where the majority of Democrats and Republicans take opposite positions, shows that the presence of Fox News does indeed influence the behavior of House members. In particular, as Figure 1 shows, the availability of Fox News in their media markets makes members of both parties adopt more conservative policy positions. Democrats with Fox News in their districts are more likely to vote against their own party, while Republicans with Fox News are more likely to vote with their party. Yet, the effect of Fox News is not uniform throughout time. It’s most pronounced close to election time and almost entirely muted (certainly not statistically discernable) immediately following elections. In the middle of the term, members moderate their party support, ostensibly reflecting the desire to deter the emergence of quality challengers. Moreover, as districts become more Republican, the effect of Fox News becomes more pronounced. 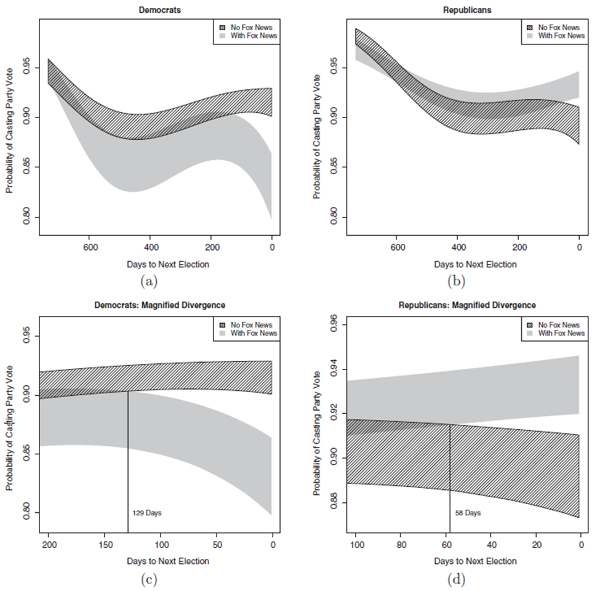 So what can we conclude from this about the influence of Bill O’Reilly, his colleagues at Fox News and partisan news media more generally on members of Congress? First, the presence of Fox News has the same effect on Democrats and Republicans, making them become more conservative. Thus, Fox News, at least in the early years did not polarize the parties, but rather broadened the conservative coalition. Second, O’Reilly and friends’ influence on members of Congress peaks around election time, when voters pay most attention to political events.

Whether Fox News actually induced the attentive public to take action or merely led members of Congress to believe it would is not a matter that we can determine with our analysis. It is possible that legislators and their staff may draw on media reports as a measure of voters’ opinions, with the emergence of Fox News shifting members’ estimates of constituent opinions to the right. Alternatively, the emergence of Fox News may have motivated members of the attentive public to contact their representatives and advocate conservative positions. Although we are unable to discern among these possibilities, our analysis does point to voters as the mediating factor in the relationship between media messages and elite responses.

Our findings also call into question claims that the emergence of right-wing media in the late 1990s polarized American politics, at least within the U.S. House of Representatives. To the contrary, Fox News shifted both Democratic and Republican members towards the Republican Party. If anything, Fox News may be responsible for a rightward shift in politics at the elite level.

This article is based on the paper, ‘The Influence of News Media on Political Elites: Investigating Strategic Responsiveness in Congress’, in the American Journal of Political Science.

Kevin Arceneaux – Temple University
Kevin Arceneaux is Professor of Political Science, Faculty Affiliate with the Institute for Public Affairs, and Director of the Behavioral Foundations Lab at Temple University. He studies political communication, political psychology, and political behavior, focusing on the interaction between political messages and people’s political predispositions.   His recent book, Changing Minds or Changing Channels: Partisan News in an Age of Choice (2013, University of Chicago Press, co-authored with Martin Johnson) employs novel experimental methods to investigate how human agency shapes the influence of political media.  It was co-winner of the 2014 Goldsmith Book Prize awarded by the Harvard Kennedy School Shorenstein Center on Media, Politics, and Public Policy.  He has published articles on the influence of partisan campaigns on voting behavior, the effects of predispositions on attitude formation, the role of human biology in explaining individual variation in predispositions, and experimental methodology.