Why do so many people in advanced democracies choose not to vote? While many scholars focus on electoral systems as an explanation for this trend, Matthew R. Miles argues that citizens’ experience with bureaucracy may be equally important. In new research which examines government and institutions in 35 countries, he finds that when people perceive that the courts, civil service, and other bureaucratic institutions are unfair, the less they are likely to vote.

While many people vote because they are interested in shaping the outcome of an election, voting is also an endorsement of the existing government.  In this way, voting can be viewed as a referendum on system performance.  It is an opportunity for the citizenry to express their consent to be governed. This is one of the reasons that Schattschneider argued in 1960 that an ideal democratic system aspires to have full voter participation.  Political systems with low voter turnout are generally seen as less legitimate.

Scholars have been looking at the institutional arrangements that influence voter turnout for the last half century.  Like we might expect, systems which compel their citizens to vote have significantly higher levels of voter participation.  The more interesting question, however, is what political systems can do to persuade more voters to voluntarily participate.  Much of the research in this area focuses on how electoral systems—rather than other institutions—motivate people to vote.  For instance, systems that provide people with a distinct choice have higher levels of voter participation, as do systems that allocate votes proportionally, or systems that have higher levels of accountability.  The dominant view assumes that people primarily vote to change the composition of government.  As such, political systems with institutional arrangements that make this easier will have higher voter participation.

Yet, we know that when people are asked to evaluate their system of government, they tend not to think about electoral institutions.  In fact, European attitudes about how well their system of government represents them are influenced more strongly by the fairness of the courts, civil service and bureaucracy than they are by electoral institutions in their country.  This is because people have frequent contact with these institutions. When people think about government, they consider their most recent experience with the bureaucracy more than their most recent experience at the polls.  Dahl calls these institutions arbitrating institutions because they allow for citizens to find representation outside of the electoral process.  Systems which treat everyone fairly in their day-to-day operations are regarded more highly, even if the way that they allocate votes is less than ideal.

This suggests that political systems can motivate people to participate in elections by making them feel valued by the system.  When a government demonstrates to its people that they are important to the governing officials, this will change public views about the system and encourage more people to cast an endorsing vote.  Thus, systems that treat their citizens fairly in their day to day government operations show people that they are valued by the system of government.  This results in higher levels of voter turnout.

I tested this using aggregate voter turnout data from 35 advanced democracies, surveys conducted during the national elections in those same 35 advanced democracies and a nationally representative survey experiment conducted in the United States.  The experiment is used to demonstrate the direction of the causal arrow.  That is, a statistical association between high levels of voting in a country and courts, civil service, and bureaucracies could mean that high levels of voter participation is causing the arbitrating institutions to treat people more fairly.  Alternatively, something else that I have not considered could be causing both of them to rise simultaneously.  The only way to know that fair arbitrating institutions motivate voter participation is to experimentally manipulate the fairness of these institutions and measure if people are more or less likely to vote.

Figure 1 displays both the evaluations of institutional quality and the reported likelihood of voting in that system by treatment group.  Clearly, the experiment successfully manipulated perceptions of institutional quality.  Those in the full treatment group were half as likely to think that the hypothetical system was fair than those in the procedurally fair control group.  In addition, those in the treatment groups reported significantly lower levels of likely voting in the hypothetical system.  Someone in the full treatment condition is predicted to be 5.8 percent less likely to vote than someone in the control group.  The differences are not substantively large, but sufficient to demonstrate that fair arbitrating institutions influence reported voting intentions, not the other way around. 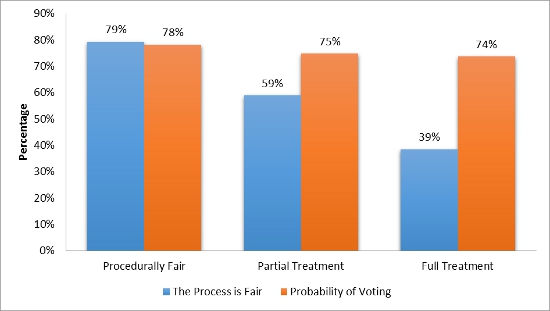 Using cross-national data which incorporated the objective level of arbitrating institution fairness as well as other country level indicators, the next figure demonstrates how fair courts, civil service, and bureaucracies influence voter turnout in 35 advanced democracies.  The country level control variables are: compulsory voting, the quality of democracy, the length of democracy, the number of political parties, the fairness of the electoral system, electoral competitiveness, and socioeconomic development.  Figure 2 shows the model predicted probability of a person saying that they voted in the national election in the third wave of the Comparative Study of Electoral Systems. 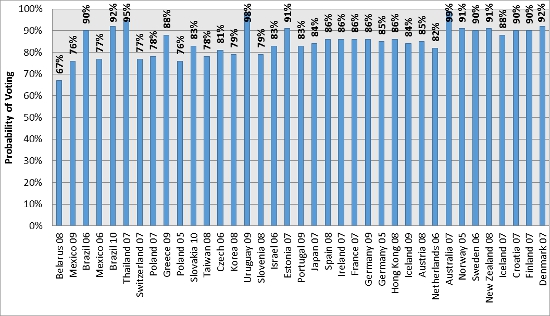 The x-axis of Figure 2 is sorted by the objective fairness of the arbitrating institutions.  This makes it simpler to see the influence of these institutions on voter turnout.  Belarus 2008 had the least fair courts civil service and bureaucracy and Denmark 2007 had the most fair.  Several countries had more than one election, which makes it all the more interesting.  For instance, The Brazil 2010 election was a presidential election while the Brazil 2006 election was a parliamentary election.  Since the statistical model controls for election type, it is evident that the primary reason for higher reported voter turnout in 2010 was that the arbitrating institutions were more fair in 2010 in Brazil than in 2006.  So, while aggregate voter turnout in 2006 was actually higher in Brazil than in 2010, this evidence suggests that fair arbitrating institutions motivated about 3 million more people to participate in the 2010 election than otherwise would have.

What does this mean?  I think that there are two implications.  First, governance matters.  The way that people are treated when they seek government services influences what they think about their system.  Second, many people see voting as a referendum on system performance.  When people are pleased with their government, they are more likely to vote.  So, while systems with compulsory voting (Uruguay, Australia, and Brazil) have higher predicted levels of voter turnout, compulsory voting laws are the only country level variable that has a stronger influence on voter turnout than the fairness of the courts, civil service and bureaucracy.

This article is based on the paper ‘Turnout as Consent: How Fair Governance Encourages Voter Participation’, in Political Research Quarterly.

April 20th, 2015|Democracy and culture, Elections and party politics across the US, Matthew R. Miles|0 Comments
Previous post Next post