Airports have become a familiar presence both in and near many U.S. cities in recent decades, but are they actually beneficial to a region’s economic growth? In new research which takes advantage of 1978’s Aviation Deregulation Act to study air services’ effects, Bruce Blonigen and Anca Cristea find that a 50 percent increase in air traffic leads to a 7.5 percent rise in a region’s real GDP over 20 years. They also find that this growth occurs almost exclusively in the service and retail sectors.

Are airports key to regional prosperity? Many organizations would seem to think so, with local airport and economic development agencies active in providing subsidies and pledging future travel tickets in order to encourage airlines to add new routes for their region.  A 2009 survey by Airports Council International North America found that of the 52 responding airports, 33 had incentive agreements involving domestic air service, and 23 airports had incentive agreements for international air service.

The universal justification for these local government policies is the stated belief that air service is crucial for regional economic growth.  In support of this belief there is anecdotal evidence suggesting that air transport services improve business operations by providing quick access to input supplies, allow business people quicker face-to-face access to customers and suppliers, and overall represent an essential input for many industries.

In new research, we have found a way to credibly estimate the causal effect of air service on regional growth.  We find that there is a significant causal link.   Our estimates indicate that a 50 percent increase in air traffic growth leads to additional income growth in a region that cumulates to a discounted sum of income equal to about a 7.5 percent increase in real GDP over the following 20-year period. These gains accrue almost exclusively in the service and retail sectors, suggesting which businesses will most favor efforts to increase air service in a region.

The key to our ability to disentangle the independent effect of air service was in finding an event in history where there were significant and unexpected changes in air service that were not linked to current or expected regional growth patterns.  We find this with the large airline deregulation that occurred in the U.S. at the end of the 1970s.

The Aviation Deregulation Act (ADA) of 1978 removed all the regulations that had restricted the provision and the efficient organization of air services across the U.S. Most importantly, the policy change enabled airlines to enter and exit freely any city-pair market, and to compete on any route in prices and flight schedules without any constraints.  This was a drastic switch in the industry’s mode of operation.  Prior to 1978, the activity of the airline industry was closely overseen by the Civil Aeronautic Board (CAB), which regulated air service and prices. A consequence of the tight CAB regulations was the large market distortions that affected the provision of air services across locations. The unwinding of these distortions in the wake of the aviation deregulation caused rapid transformations in the industry.

In our econometric analysis, we exploit the sudden and external variation in air traffic changes induced by the ADA.  We investigate how this large one-time market adjustment in aviation services affected local economic growth, focusing on population, employment and per-capita income growth at city level.

One useful feature that we can exploit in our analysis is the fact that the CAB favored air service to small cities at the expense of large cities. This resulted in regulation-induced market distortions that varied across locations. Thus, in the aftermath of deregulation, the subsequent changes in air service across different city sizes were not only dramatic in magnitude, but also opposite in direction, as seen in Figure 1. 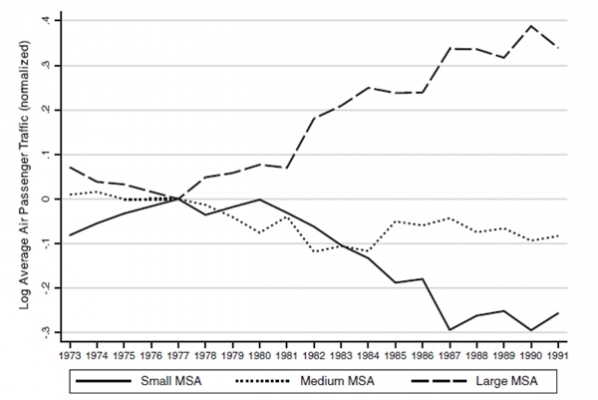 Note: The series represent the average (log) number of air passengers by year and city size category. To remove level differences in air traffic and facilitate relative comparisons between city size categories, each series has been adjusted by its average value for 1977. The small, medium and large city categories are defined by splitting the sample distribution of MSA population levels in three equal parts, based on city size information at the beginning of the sample period.

To ensure that our estimates capture the causal effect of air traffic changes on urban growth our model exploits the variation coming from deviations in the rate of air traffic growth in the wake of the 1978 aviation deregulation, in order to identify any additional impact on economic growth at city level.  We further augment our analysis with other econometric strategies that ensure the causal interpretation of our results.

Our findings of a direct effect of air transport on population, employment and per-capita income growth at city level are important for better understanding the determinants of regional growth.  They provide the most robust evidence to date that policies intended to boost air services to a region can increase its growth.  Of course, our evidence doesn’t guarantee it.  Unlike the massive and market-driven changes in air service due to the ADA regulation, regional incentives we see offered to airlines to increase air services these days are ones targeted by local economic policy officials.  It may difficult for them to correctly gauge market conditions and effectively target such incentives.  This is an important topic worthy of future study.

This article is based on the paper ‘Air service and urban growth: Evidence from a quasi-natural policy experiment’, in the Journal of Urban Economics.

Bruce Blonigen – University of Oregon
Bruce Blonigen is the Philip H. Knight Professor of Social Science in the Department of Economics at the University of Oregon.  He is also a Research Associate with the National Bureau of Economic Research.  His main research interests are the study of multinational firm behavior and international trade policies, but his work also spans issues in industrial organization, urban economics and international finance.