After the relative success of efforts to desegregate them, America’s public schools are becoming increasingly segregated once more with increasing negative effects on student achievement and educational opportunities. Jennifer Ayscue and Gary Orfield argue that much of this trend is due to the fragmentation of school districts across states and metropolitan areas, and that this has mainly been caused by the urbanization of previously rural communities. They argue that in order to address the problems of school segregation, authorities must consider regional strategies such as transfer programs, regional magnet schools, and district consolidation.

Since the 1980s, American educational policy has focused on the individual level—individual students, individual teachers, and individual schools. Policies have addressed how to make students work harder and learn more. Success has been measured by standardized tests, and teachers have been held accountable when students have not achieved at high levels. When schools have had many low-performing students, funds have been diverted to create school choice options outside of traditional public schools, based on the premise that with autonomy and competition, these schools will likely be better than traditional public schools. However, these individual-level approaches have failed to consider structural features that impact students’ academic success. Segregation is one such feature.

Segregation is linked to numerous negative academic and social outcomes, for reasons we will address below. Yet American public schools—which reached their peak of desegregation in the 1980s—are now becoming increasingly segregated again. One important factor that contributes to the intensifying segregation of American schools is the way school districts are structured: states and metropolitan areas that are highly fragmented—that is, split into many separate school districts—also have higher levels of racial and socioeconomic segregation.

American municipal and educational institutions were created when the United States was a rural society characterized by many small communities. As metropolitan areas developed, communities within a metropolitan area found ways to cooperate by adopting regional approaches in many sectors, including transportation, water, sewer systems, and environmental controls. However, in most metropolitan areas, school systems continued to operate as separate entities and in many cases became quite dissimilar from one another. As a result, in metro areas across the United States, urban school districts tend to enroll more low-income students of color while suburban school districts have more white and middle-class students. In fact, in one state, Connecticut, the state supreme court recognized district fragmentation as the basic problem segregating the state’s students and ordered the development of voluntary interdistrict regional magnet and transfer policies, which have significantly lowered segregation in the state, unlike other states in the region.

Fragmentation occurs to a lesser extent in states where the basic unit of school district organization is the county rather than the municipality. This county-wide pattern is more widespread in states that were more rural and where urbanization occurred later, often located in the South. In these cases, small communities are not separate worlds of educational policy but instead are places where all the major institutions share a common interest in making the school system work, and a desegregated school system is more likely to evolve. Moreover, history has shown that the potential for extensive and lasting desegregation is even greater when desegregation policies are in place as they were in most of these districts in the South from the early 1970s into the 1990s.

Using data from the National Center for Education Statistics, Common Core of Data, we analyzed enrollment and segregation trends between 1989 and 2010 in the public schools of four states: New York, New Jersey, North Carolina, and Virginia. We selected these four states from a larger project because the level of fragmentation in the two Southern states (North Carolina and Virginia) is substantially less than in the two Northern states (New York and New Jersey). In addition, the racial composition of public school enrollment is similar in all four states, ranging from 46-50 percent nonwhite, allowing us to compare the relationship between fragmentation and segregation. 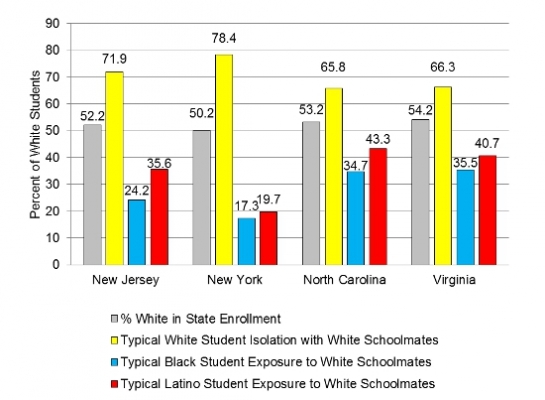 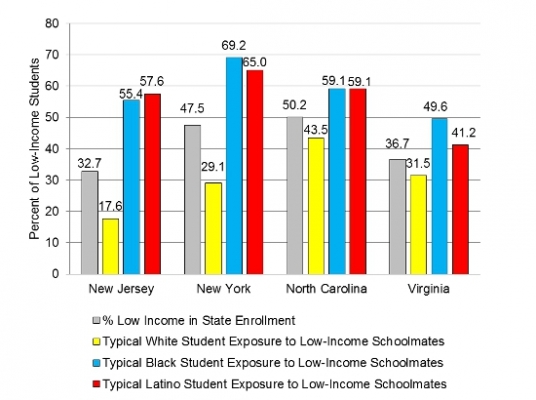 While we acknowledge that additional factors are also likely related to segregation patterns in these four states, such as residential segregation, student assignment policies, desegregation orders, legal constraints, and migration patterns, our analysis demonstrates that fragmentation is one important mechanism related to segregation. Highly fragmented states and metropolitan areas can no longer attempt to provide equal education to students within a structure that perpetuates inequalities. Instead of focusing their efforts only within their school districts, highly fragmented states and metropolitan areas need to consider using regional strategies that have been successful elsewhere – such as interdistrict transfer programs, regional magnet schools, and district consolidation—to make progress in desegregating their schools across school district lines.

This article is based on the paper ‘School district lines stratify educational opportunity by race and poverty’ in Race and Social Problems.