In the 2014 midterm elections, less than a quarter of those aged 18-29 voted, half the number of those who did who were aged 45-64. How can this poor level of youth turnout be addressed? In new research, John B. Holbein & D. Sunshine Hillygus examine the effects of preregistration laws in states like California and Florida, which allow those who are 16 or 17 to register before they are eligible to vote. By comparing the rates of those who preregister to vote with those who register traditionally, they find that preregistration can increase turnout by up to 13 percent, and that this effect is consistent for both Republicans and Democrats.

Voting is expensive. Not in the monetary costs, but in the time, energy, and mental attention this foundational act of democracy requires.  In order to vote, citizens have to know where to vote, when to vote, what is required to vote, and how to register to become eligible to vote.

Scholars have long argued that the registration requirement, in particular, is a “major deterrent to voting” and the primary reason for low turnout in the United States compared to other democracies. The 2014 midterm election offered yet another example—just 36 percent turned out to vote in the midterm election, a recent low. Turnout is especially low among young people.  In 2014 less than a quarter of voters ages 18-29 voted, compared to just under half of those ages 45-64.  These unequal levels of turnout threaten democratic institutions by weakening the link between citizens and their elected officials, creating unequal representation.

Many have sought to address low turnout rates by making voting “cheaper.” Through reforms like early voting, same-day registration, online registration, and loosening of voter identification restrictions, policymakers have sought to make the voting process easier.  However, the research on the impact of these cost-saving electoral reforms has been mixed—with recent studies showing they have little impact on participation, or, in some cases, actually depress turnout.

Some state policymakers have taken a new approach to encouraging citizens to vote in recent years. States like Florida and California have implemented preregistration laws that allow those 16 or 17 to register before they are actually eligible to vote.  Once preregistered, young citizens are considered “pending voters” until they turn 18.

In new research, we explore whether preregistration lives up to its promise of increasing voter turnout. To do so, we could simply compare the turnout rates of those who preregister to those who use the more traditional form of registering—waiting until they turn 18.  However, there are reasons to be skeptical of this approach. Teens that preregister might be more interested in politics, and might have voted even without preregistration.

In order to get around this challenge we use two statistical approaches.  Our first approach uses a difference-in-difference model.  This approach compares changes in youth turnout rates in states that implemented preregistration to changes in turnout in states that did not.  This is the standard approach in studies of electoral reforms’ impacts, as it is stronger than simple comparisons.

Our difference-in-difference model indicates that the increase in turnout in response to preregistration could be as large as 13 percentage points: a noticeable amount.  Even our most conservative models that probably understate preregistration’s impact indicate that this law increases youth turnout in a meaningful way.

Going one step further, our second approach uses a regression discontinuity approach. This statistical model compares individuals on either side of eligibility to vote.  While individuals on either side of this arbitrary cutoff are similar in many ways, they differ in one important way: the opportunity to preregister or regular register during the 2008 presidential campaign.  On one side of this cutoff, citizens who will be 18 by Election Day are exposed to the traditional registration process during this time.  In contrast, in states where preregistration is available, slightly younger citizens are exposed to the opportunity preregister for future elections.  This quirk in preregistration rules produces something akin to a natural experiment—by a simple accident of birth, those born one day later are exposed to preregistration programs instead of the more traditional registration system.

Our regression discontinuity results, shown in Figure 1 below, indicate that those who had the opportunity to preregister during the campaign were 8 percentage points more likely to vote in the subsequent presidential election than those who used traditional registration. It compares the slightly younger group that was nudged towards preregistration (the group on the right) to the status-quo registration group (the group on the left). The figure plots turnout rates (the y-axis) across birthdays (the x-axis) and fits a model to describe these rates for both the preregistration and the traditional registration groups (the red line). As shown in the figure, there is a jump in voting rates at this preregistration cutoff. 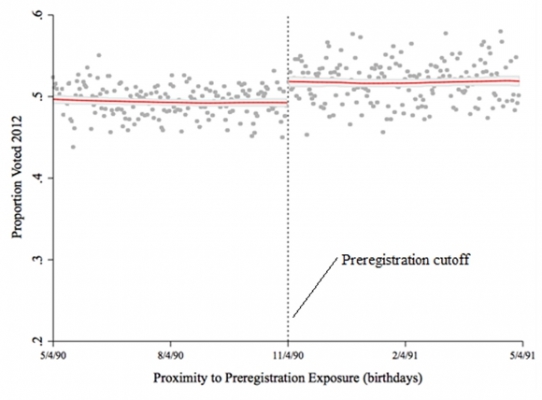 Despite these promising results, preregistration faces a tenuous future. In some states preregistration has been swept up in the recent spate of laws requiring voter identification and making voting otherwise more restrictive.  In 2013, for example, North Carolina’s State Legislature abruptly, and controversially, repealed preregistration, claiming that voter confusion was demobilizing young citizens. Our results suggest that efforts to repeal preregistration are misguided.  Preregistration is a viable approach for helping encourage young people to vote.

This article is based on the paper ‘Making Young Voters: The Impact of Preregistration on Youth Turnout’, in the American Journal of Political Science. Please note that on 23 January 2017, the authors published an Erratum to their original article.

John B. Holbein – Duke University
John B. Holbein is a PhD candidate at the Sanford School of Public Policy at Duke University. He has expertise on the topics of American political behavior, political participation, education policy, and methods for causal inference. His work has been published in the American Journal of Political Science and has been supported by funding from the National Science Foundation.

D. Sunshine Hillygus – Duke University
D. Sunshine Hillygus is Associate Professor of Political Science at Duke University. She has expertise on the topics of American political behavior, public opinion, campaigns and elections, survey methods, and information technology and politics. She is co-author of two books: The Persuadable Voter: Wedge Issues in Political Campaigns (Princeton University Press, 2008) and The Hard Count: The Social and Political Challenges of the 2000 Census (Russell Sage Foundation, 2006).

April 27th, 2015|D. Sunshine Hillygus, Elections and party politics across the US, John B. Holbein|0 Comments
Previous post Next post