The last three decades have seen a growing role for financial markets and institutions in the economy, with households included in this trend. But how have households changed their attitudes and behaviors in relation to financial markets? In new research which looks at survey data on consumer finance, Adam Goldstein and Neil Fligstein find evidence of a new household ‘finance culture’. While financial firms sought out customers of all incomes, the upper and middle classes have embraced household borrowing and have become much more likely to take financial risks.

The resurgence of finance over the past three decades represents one of the most remarkable trends in the recent history of capitalism. “Financialization” has become a common byword to describe the growing role of financial markets, motives, actors, and institutions in the operation of the overall economy.

One aspect of financialization that has received less attention is the role of households. As the financial industry has expanded, it has done so in large part by marketing more products to households, such as mortgages, second mortgages, mutual funds, stock trading accounts, student loans, car loans, and various forms of retirement products. But how have households themselves changed their attitudes and behavior in relation to financial markets? Should we view their primary role as that of consumers who supply the raw inputs for Wall Street’s machinations?  Or have households also started to think about their own economic activity in more financial terms? What is the scope of popular financialization?

To answer these questions we examined eighteen years of survey data from the U.S. Federal Reserve Board’s Survey of Consumer Finances. We charted changes in the financial activities and attitudes of U.S. households from 1989 to the onset of the financial crisis in 2007. Our goal was to provide a global view of the various ways that households at different points in the income distribution have become more involved with the financial economy, and how this has coevolved with their attitudes towards risk and debt.

The patterns are revealing: In terms of financial consumption, we find secular growth in the use of all kinds of financial products across the socio-economic structure. This implies that financial firms sought out customers for their products and made them available to people up and down the income distribution.

Changes in cultural attitudes, however, are mostly confined to the upper- and upper-middle classes. Higher income households have adopted a more proactive orientation toward managing their financial affairs, more liberal attitudes towards borrowing, and a more aggressive disposition towards risk-taking. In contrast, for those in the bottom two-thirds of the income distribution, there is little evidence that increasing use of financial services has brought about a significant shift in cultural norms about risk and debt.

Consider Figure 1: It shows data on the number of accounts of all forms other than credit cards that households have with financial institutions. The plots represent the average number of accounts held within groups defined by their percentile positions on an index of socio-economic status (SES). The SES index is based on household income, total assets, and highest educational attainment. 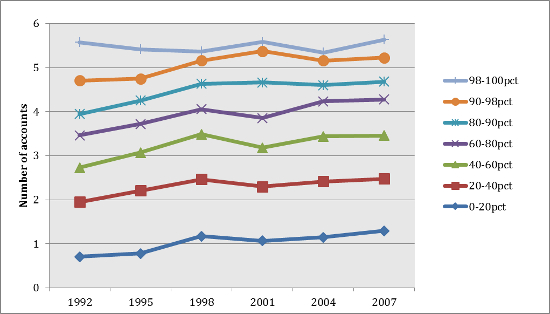 Here we see roughly parallel growth across the SES quantiles. Financial firms were able to get households throughout the distribution to consume more of their products. The changes in the average number of accounts from 1992 until 2007 are statistically significant for each quantile except for the top 2 percent. Not surprisingly, those with the highest socio-economic status (SES) always have the most financial products, but the trends are similar.

The pattern is virtually identical if we just focus on credit cards: There is a statistically significant increase in the number of credit cards held by each group from 1989 until 2007. While higher SES households tend to have more credit cards in general, the financial industry succeeded in getting all people to open and maintain more accounts. 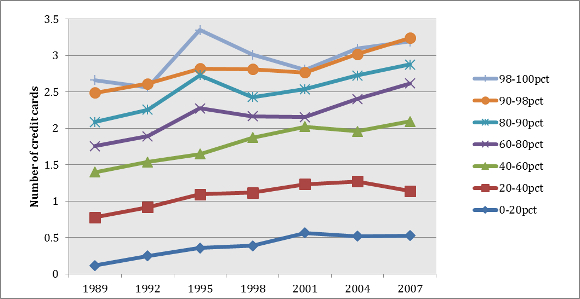 So what do these parallel line graphs tell us? First, household financialization (in the sense of the increased use of financial products) was a broad-based process that involved households all across the socio-economic distribution. Second, this expansion has not undermined the strong association between income level and participation. Even as the much discussed “democratization” of finance and the rise of “sub-prime” lending have brought more lower-income households into the financial economy, the most well off households continue to lead across virtually every category of financial services consumption.

An even more interesting question is: Has the expanded use of financial products coincided with changing cultural attitudes? Beginning with pension reform and the switch from defined-benefit to defined contribution plans, Americans have been encouraged to shift their outlook from being passive to proactive financial subjects. The sociologist Gerald Davis argues that as households participate in financial markets more directly, they have had to learn to think like financial economists in order to manage their consumption, investments, and debts. Such arguments imply that financialization also entailed a qualitative shift in households’ orientation toward financial activities, which we refer to as a “finance culture.”

One useful attitudinal indicator is the degree to which individuals are altering their conceptions of risk. Willingness to take on risk reflects a more informed and aggressive orientation toward financial market participation. Figure 3 shows that risk tolerance among American households rose sharply during the 1990s, before retreating somewhat after 2001. We suspect this pattern reflects increasing household participation in the stock market during the bubble of the 1990s, which was followed by the stock market crash in 2001. Overall, the percentage of households who say they take little or no financial risks declined from 47 percent in 1989 to 39 percent in 2007, which is a statistically significant change. The percentage of households who view themselves as taking above average or high risks rises from 14 percent in 1989 to 25 percent in 2001 and then dips to about 22 percent by 2007 (a statistically significant change). The timing of these changes is consistent with George Akerlof and Robert Shiller’s argument that the rising stock market attracted households who wanted to be part of the “new” economy and accustomed them to be more comfortable with risk-taking. 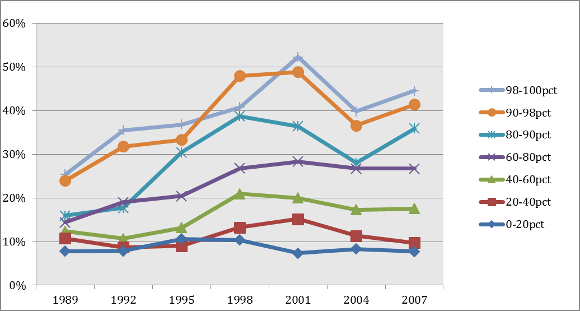 These patterns suggest that if a self-conscious culture of aggressive financial risk-taking emerged in the U.S., it is concentrated in middle and upper parts of the income distribution. It is these households who had the resources, opportunities, and wherewithal to shift their views and become more aggressive.

A similar pattern emerges when we consider the extent to which Americans have adopted more liberal norms about the propriety of borrowing to maintain one’s lifestyle in the face of income shocks. Debt-funded consumption grew significantly during the mid-2000s. Given that so many households have also experienced stagnant or negative income mobility, it is interesting to explore how their attitudes about using debt to support their lifestyles may have changed.

Figure 4 shows that there has been a substantial increase from about 45 percent to about 55 percent in the proportion who feel it is okay to borrow to support one’s lifestyle if income declines. We might expect this shift to have been driven by those whose incomes had declined over the preceding five years. Although the downwardly mobile do tend to approve of such financial borrowing, the change in attitudes over time was actually most pronounced among those whose incomes had increased or remained constant! Those who have experienced positive income growth actually exhibit the largest change in rates of agreement, from about 42 percent in 1989 to 55 percent in 2007.

Figure 4: Percentage of households who agree it is right to borrow to support one’s lifestyle when income declines, by 5-year income trajectory and by debt-to-income quartile

We interpret this pattern to mean that those who are facing downward income mobility have always had a more open attitude towards taking on debt in order to support their lifestyles. What has changed is that those whose incomes are constant or rising have become more prone to view debt-funded consumption as a permissible strategy to support one’s lifestyle. Again, this suggests that if there is a new finance culture, those in the middle and particularly upper middle classes have been the ones to embrace it.

This article is based on the paper ‘The emergence of a finance culture in American households, 1989–2007’, in the Socio-Economic Review.

Adam Goldstein – Harvard University
Adam Goldstein is a sociologist and currently a post-doctoral fellow in the Robert Wood Johnson Foundation Scholars in Health Policy Research Program at Harvard University. In 2016 he will join the faculty of Princeton University as an assistant professor in the Sociology Department and Woodrow Wilson School of Public Affairs. His research examines the social consequences of financial capitalism in the contemporary United States. He is interested in how institutional changes associated with ‘financialization” have reshaped various socio-economic domains, and how organizations, communities and households respond to these changes in patterned (and often surprising) ways.