In the wake of the tragedies of the past year in places such as Ferguson and New York and Baltimore where black men have been killed by police officers, many have called for reforms to the police, pushing for greater diversity among police departments. But do black officers have an advantage over white officers in building relationships with black citizens? In new research which examines police–community relations in East St. Louis, Jacinta M. Gau and Rod K. Brunson find that the black community expressed concern over under-policing, slow response times, and police misconduct both on and off duty, even though the city’s police department also reflected the population’s black majority.

As the nation becomes increasingly aware of the longstanding tensions between police and communities of color, calls frequently go out to hire more black officers. It is commonly presumed that because of shared racial identity, black officers are naturally better at communicating with black citizens and dealing with agitated black suspects. Especially as killings of black suspects by white officers continue to dominate headlines, the purported solution to the tenuous relations between police and black Americans is to create more racially diverse police departments.

Yet recent research suggests that black officers do not enjoy an inherent advantage over white officers in dealing with black citizens. For example, some research indicates that black citizens view police officers as products of the occupation or institution, irrespective of individual officers’ race; that is, all police are “blue.” Other studies suggest that hostilities may be even greater between black officers and citizens, and that shared racial identity may backfire when one or both sides find that their expectations are unmet.

In new research, we set out to examine police–community relations in a city where the majority of the citizenry and the majority of the police force are black – East St. Louis, Illinois. If popular opinion were to hold true, we would expect to find citizens offering high praise to their local police force. On the other hand, we considered that disadvantaged community context might play a critical role in shaping how police and citizens relate to one another in this majority-black city. Many police departments are underfunded and understaffed. Officers in high-crime areas are spread woefully thin, and departments desperate for new hires may not vet recruits thoroughly. Is officer race enough to overcome these practical challenges?

All evidence pointed to “no.” Instead, our qualitative analysis of face-to-face interviews with black residents of the city revealed deep-seated distrust of local police. A series of negative comments and troubling detailed accounts emerged, and coalesced into two overarching themes.

Ineffective Law Enforcement: 911 is a Joke

A frequent complaint pertained to what black respondents saw as under-policing. While much national attention has focused the spotlight on over-policing (such as aggressive stop-and-frisks under an order-maintenance model), citizens in our study were disturbed by slow response times and officers’ seeming indifference to gun violence and other persistent community problems. One respondent noted, “[W]hen you need them, they’re never there and if you really need them it takes forever.” Another recalled, “I saw a shooting once and called the police but by the time they got there the other boys was gone.” Respondents were aware of the department’s severe funding shortage and tried to be sympathetic toward the officers who they knew were overburdened, but they also felt that slow response times and officers’ frequent claims that they were “on another call” contributed significantly to heightened fear of crime and victimization.

Police Misconduct On and Off Duty

Respondents described a range of unethical and even criminal actions by police officers both on duty and off. There was general agreement that although it would not be fair to malign the entire department due to the misconduct of a few employees, so many officers were involved in wrongdoing that it was difficult to credibly attribute the problem to a few bad apples. One respondent expressed her ambivalence: “I don’t know if I should [have a negative outlook] on the whole department or just some of the [officers].” People witnessed misconduct firsthand, heard about instances from friends, and saw media reports about it. Stories abounded about officers attempting to solicit sex, money, or drugs from motorists during traffic stops. Particularly infuriating were the cases—frequently learned about through media coverage—of internal corruption whereby officer misbehavior was covered up or high-ranking police officials (including a former chief) were revealed as having been involved in bribery and obstruction of justice.

Overall, our study challenges popular opinion that black officers are inherently good at addressing the needs and concerns of black citizens. Tellingly, not one of our respondents mentioned officer race, even though this city was an instance where the city racial demographics (majority black) were reflected in the police department (majority black). The problems that exist between police and communities of color are too multifaceted to be solved by merely altering officers’ racial makeup, and black officers are no less susceptible to the negative impact of a dysfunctional organizational culture than their white counterparts are. Officer race is immaterial to black citizens who feel their needs are unmet, their safety is threatened, and the local police are themselves engaged in wrongdoing. While achieving greater diversity in police departments is a laudable goal, it is not a panacea for a problem of this magnitude and complexity.

Jacinta M. Gau – University of Central Florida
Jacinta M. Gau is an Associate Professor in the Department of Criminal Justice at the University of Central Florida. Her research focuses on police, with an emphasis on police–community relations, procedural justice and police legitimacy, and racial issues. Her work has appeared in multiple journals. She also has two textbooks, Statistics for Criminology and Criminal Justice (sole authored) and Key Ideas in Criminology and Criminal Justice (co-authored), both published by Sage.

Rod K. Brunson – Rutgers University
Rod K. Brunson is Vice Dean of Academic Affairs, PhD Program Director, and Associate Professor in the School of Criminal Justice at Rutgers University.  His research examines youths’ experiences in neighborhood contexts, with a specific focus on the interactions of race, class, and gender, and their relationship to criminal justice practices.  His work appears in the British Journal of Criminology, Criminology, Evaluation Review, Justice Quarterly, and Urban Affairs Review. 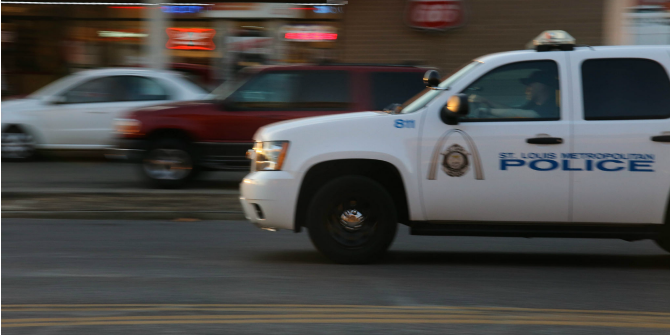