Many American cities were designed with the automobile in mind, a prioritization that has often led to congestion and pollution. How then, can we move away from our reliance on the car in our cities? In new research which examines transport policies in Boulder, Colorado over a twenty year period, researchers at the University of Colorado found that when the city government increased the ‘supply’ of infrastructure for bikes, pedestrians and other forms of sustainable transit, single-occupancy auto-use fell by nearly 10 percent. Lead author, Alejandro Henao, argues that other cities can learn from Boulder’s focus on developing policies and infrastructure that expand the number and capacity of sustainable transportation choices.

The historic prioritization of the automobile over other modes of transportation has gifted transportation problems such as congestion, pollution, and a poor of quality of life to many cities. Living in cities designed with the auto in mind, the majority of people do not have other option than to rely on driving. This is the case of most cities in the United States (US) with high rates of automobile mode share. Fortunately in recent years, communities have been increasingly promoting sustainable modes of transportation including walking, bicycling, and transit. The shift away from auto-dependency to walking, bicycling, and transit requires many changes (e.g. policy, cultural, travel behavior) and more importantly substantial investments in these sustainable modes of transportation.

Boulder, Colorado is one of the few cities in the US that has invested heavily in sustainable transportation infrastructure over recent decades and simultaneously experienced increased share of these modes. Between 1990 to 2009 – our study period –  Boulder invested heavily in walking, bicycling, and transit (‘supply’) and saw a return on  its investment in the form of a marked increase in the combined walking, bicycling, and transit mode share (‘demand’), and a reduction in automobile mode share.

The city of Boulder’s successes in promoting non-auto travel can be attributed to a wide range of social, political, and geographic factors and the presence of a progressive and advocacy-oriented populous that has worked closely with city planners to create an extensive multi-modal transportation network. One of goals that Boulder identifies is to develop “an integrated, multimodal transportation system emphasizing the role of the pedestrian mode as the primary mode of travel.” Some of the policies and programs that have addressed these needs from 1990 to 2009 are: 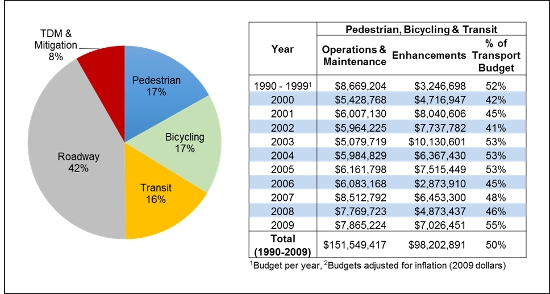 We used three data sources to assess ‘demand’, as measured by changes in mode share between 1990 and 2009:

Figure 2 shows the share of all three modes in combination –Walking, Bicycling, and Transit (W+B+T) – indicating that the percent use of non-auto modes in Boulder consistently increased over the twenty year study period. The trend line for combined non-auto modes in Boulder indicates a 0.45 percent increase per year, or approximately 8.5 percent for the study period compared with the US national average of 1.1 percent decrease during the same period. A comparison of Single Occupancy Vehicle (SOV) demand in Boulder and nationwide indicates that while the US national average has increased 2.9 percent from 1990 to 2009 (Figure 2), Boulder has experienced a 9.9 percent decrease in SOV mode share, which aligns with the Boulder TMP goal to “reduce single-occupancy-vehicle travel to 25-percent of trips.” 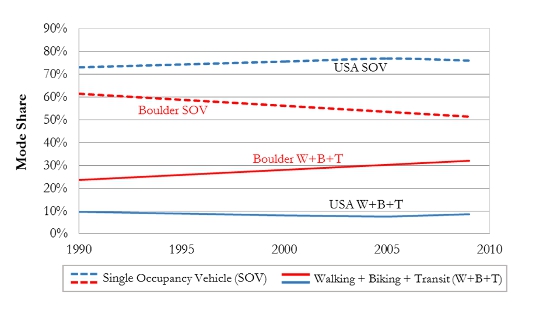 A comparison of trends as shown in Figure 3 illustrate that while investing in increased ‘supply’ of non-auto infrastructure (pedestrian, bicycling and transit combined), Boulder has simultaneously experienced an increase in ‘demand’ as measured by the percent use of non-auto modes between 1990 and 2009. 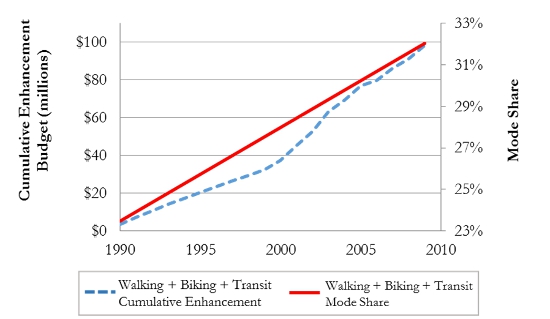 The results suggest that a $10 million investment is related to a 1 percent change in combined non-auto mode share, this only showing correlation not necessary causation. The latent population of Boulder was already interested in walking, biking, and transit supporting the financial investments for better infrastructure and services. At the same time, over the twenty year study period, many people moved to Boulder specifically because of the walking, biking, and transit culture and infrastructure that had been built. The transportation mode shifts might not have happened solely as a result of these investments, but we can conclude that regardless of the reasons, the presence of robust non-auto infrastructure has supported evolving travel preferences. Cities can learn from Boulder’s focus on developing policies and infrastructure that expand the number and capacity of sustainable transportation choices. Adequate infrastructure creates and supports travel shifts while providing residents opportunities to walk, bicycle, or take transit, activities which stem from and contribute to the flexibility, sustainability, resiliency, and liveability of communities.

This article is based on the paper, “Sustainable transportation infrastructure investments and mode share changes: A 20-year background of Boulder, Colorado”, in Transport Policy.