Most political campaign committees that are regulated by the U.S. Federal Election Commission (FEC) have the same rules for fundraising save for some differences in maximum contribution limits. However, they do not all raise their money from the same kinds of communities. Whereas all committees tend to rely on areas with richer and more highly educated residents, the degree to which they do so varies widely. Committees that solicit funds nationally also raise more money from urban areas than rural areas even after controlling for differences in income and education, and gain more money from congressional districts that are not politically competitive than those that are.

Comparing contributions to different kinds of committees is difficult using the traditional approach to studying campaign contributions, which relies on surveys of individuals. While these surveys have yielded many important findings, their limited sample size means that the number of donors to any particular kind of committee is far too small for systematic analysis.

Another way to study contributions is to use data on itemized contributions (those of more than $200) by individuals to committees regulated by the FEC. These can be combined with census data to determine the total amount of money raised by different types of committees from geographic areas which have certain characteristics. Committee types include those that support candidates for Congress or the presidency, political party committees, and political action committees not sponsored by a corporation, labor union or trade association. (PACs sponsored by another organization can only solicit contributions from individuals affiliated with that organization.) A further distinction exists between contributions to congressional candidates from donors in their district or state (“local” contributions), and those from donors who would not be directly represented by the candidate. 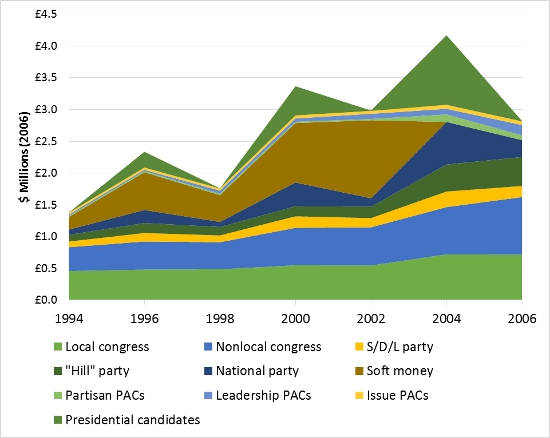 Figure 2 shows the effects of local electoral competition on predicted contributions from individual districts. Column heights are the ratio of predicted contributions from a district with an open seat race for House of Representatives, a contested race for U.S. Senate, and close voting in the last presidential race to a district with a contested House race, no Senate race, and relatively one-sided voting for president. The vertical lines represent 95 percent confidence intervals for these ratios. The predicted ratio for presidential committees is for presidential election year cycles only. 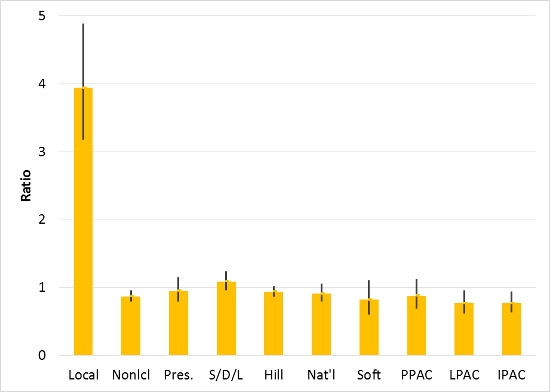 It is well known that people with more income and education are more likely to make political contributions, and research also implies that people in more densely populated areas are more likely to contribute due to fundraising networks and possible contagion effects. But how important are these variables for different kinds of committees? 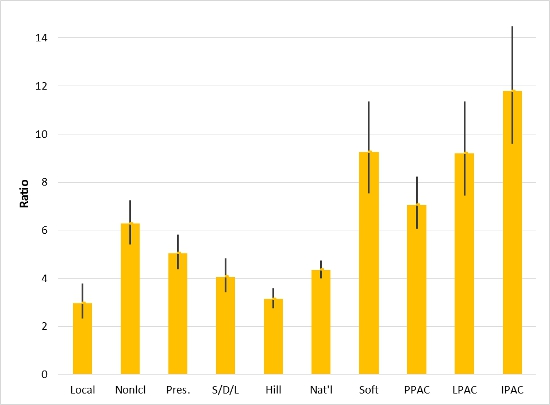 One limitation of this research is that it only includes contributions by donors who give more than $200 during an election cycle. For some committees, contributions from “small” donors make up a majority of the total. It is not likely that these smaller contributions vary as much with income, education, and perhaps urbanization or political competition as larger contributions, but we really don’t know.

Of course, the campaign finance world has changed rapidly in recent years as a result of U.S. Supreme Court decisions and innovation. Many of the new channels (such as the recently rise of ‘dark money’) for fundraising by “independent” organizations are not subject to the FEC’s regulations on disclosure. Except for a few mega donors, however, contributions to so-called Super PACs probably look most like soft money contributions before McCain-Feingold.

The fact that total itemized contributions were barely affected by the elimination of soft money illustrates the fact that political fundraisers are flexible and will always react to a change in the rules. While it may not always be very clear exactly how the fundraisers will react, policymakers can try to construct rules that will channel contributions through those channels that raise the fewest problems for representative democracy.

This article is based on the paper, “Analyzing Campaign Contributions in Context: The Effects of Political Environment and Legal Regulations on Itemized Contributions to Federal Campaign Committees,” in American Politics Research.