On Friday, PoliticusUSA reports that Democratic lawmakers in Maine are moving to impeach Republican Governor, Paul LePage. The move comes after LePage was accused of blackmailing a state school board by threatening to withhold $500,000 in funding if the extended a job offer to the state’s Democratic House Speaker.

Heading south, NH Labor News says that the Granite State’s budget battle is raging as state Republicans pushed through a budget which has a $90 million hole due to tax giveaways to large out-of-state corporations at the expense of education, healthcare and transport. Efforts by Democrats in the state Senate to amend the budget continuing resolution that would have authorized 96 percent spending were defeated by Senate Republicans. 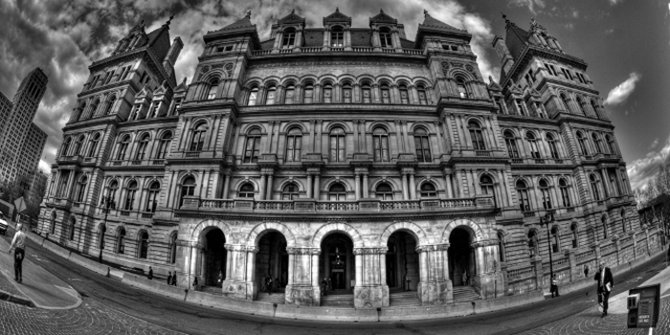 State of Politics writes Friday that the New York State Assembly approved the ‘Big Ugly’ budget bill after it was passed by the state Senate earlier in the night. The measure extends a property tax cap, but other important issues such as a minimum wage hike and Governor Cuomo’s education tax credit still remain to be tackled by lawmakers in a future legislative session.

Moving on to New Jersey, PolitickerNJ reports this week that GOP Governor, Chris Christie has stated that he is likely to veto a proposed millionaires tax and other revenue increases included in state Democrats’ over $35 billion budget. Proposed taxes would be a higher income surcharge on those who make over $1 million a year, and a 15 percent surcharge on corporate business tax.

This week, PoliticsPA looks at whether the Keystone State will matter in 2016. They say that the state has been mostly irrelevant in presidential primaries since 1976 and much more important in the general election. This may now be changing, given that Democrats have carried the state in the last six general elections. Staying in Pennsylvania, Raging Chicken Press has the story of how a group of legislators and activists took on the National Rifle Association (NRA) and won. They say that the group challenged a recent House Bill which allowed the NRA to sue any municipalities’’ gun control ordinance in the state’s Commonwealth Court, which ruled that the amended bill was unconstitutional.

This week Political Maryland says that despite the election promises of GOP Governor Larry Hogan Jr., Maryland has not become a magnet for jobs and business. They say that since Hogan took office in January, 12 companies have announced layoffs which will total more than 1,400 jobs.

Heading down to the Old Dominion State, Bearing Drift says that at the same time as Republicans across the country are calling for the removal of the Confederate flag from public spaces, the state GOP’s leadership are calling for a new poll tax on delegates who decide to nominate a presidential candidate via convention, something that would be a violation of the 24th Amendment.

In the early part of this week, all eyes were on South Carolina, as the state’s Republican Party grappled with whether or not to take down the Confederate flag flying at the state capitol in the wake of last week’s tragic shooting in Charleston. FITS News comments that the state’s GOP rapidly went from a ‘wait and see’ attitude towards the flag to an announcement from Governor Nikki Haley that she felt that the flag should come down. They say that corporate pressure played a big role in her decision as companies such as Boeing, BMW and Volvo made it clear that they wanted the flag to go.

The Shark Tank writes on Wednesday that Florida’s GOP Governor, Rick Scott has vetoed $461 million from the state’s budget, a potentially record-breaking amount. They say that Scott has claimed that many of the items that were vetoed were ‘back-door’ additions from lawmakers.

Moving west, Wonkblog looks at why Alabama is the least friendly state to gays in the country. The Yellowhammer State seems to have less protections for gays than the others, according to a new study on state policies towards the LGBT community.

On Monday, Hit & Run reports that Texas has decriminalized school truancy. Previously the law had meant that 100,000 students a year as young as 12 had been sent to criminal court, and some to jail for missing school.

On Friday, RightMI of Michigan reacts to the Supreme Court’s marriage equality ruling to argue that states should no longer issue marriage licenses whatsoever. They say that the ruling is quite clear that Michigan needs a hands off policy on marriage and that the federal government has now assumed responsibility for determining who is eligible to be married.

Heading to the Badger State, Post Politics writes this week that Wisconsin Governor, Scott Walker is to sign legislation that will expand gun rights in the state. They say that the two new laws that Walker is to approve will remove a 48-hour waiting period and will also allow off-duty or retired police officers to carry concealed weapons in public schools. Meanwhile, Blue Cheddar says that top Wisconsin Republicans are in ‘revolt’ against Scott Walker who have been spilling potentially damaging insights about the Governor to the national press.

The Fix comments on Wednesday that the Governor of Minnesota, Mark Dayton has this week demonstrated why being a politician can be less than glamorous, as he commemorated Dairy Month in the North Star State by drinking chocolate milk while holding an official proclamation.

In Iowa this week, FreakOutNation reports that the state is now able to grant permits to people who are legally or completely blind to carry guns in public.

There is considerable debate over the effects of raising minimum wages on employment – South Dakota seems to have provided more evidence that helps those who are in favor of such increases. Dakota Free Press writes this week that the state’s $1.25 minimum wage increase in January has been followed by an upswing in the creation of new jobs and those seeking jobs.

On Friday, Intelligent Discontent of Montana has the reactions of top state Republicans on the Supreme Court’s marriage equality ruling. Comments range from that from Attorney General Tim Fox, who disagrees with the ruling, but states it is now law, to Representative Ryan Zinke, who stated that: “Today’s court decision undermines religious freedom and usurps the rights of Montana and several other states that have chosen to define marriage within their states”.

Strange Bedfellows reports this week that the Seattle City Council has moved to put a record $930 million property tax levy on the city’s November ballot. The levy would replace a previous $365 million measure which has not been as effective as many had desired since it was approved in 2006.

The Atlantic looks at a recent economic turnaround in Central Oregon after the region’s lumber industry crashed. The area’s resurgence is apparently down to an active and ambitious community college which has helped to attract industry and prepared students for high-wage and high-skilled jobs.

Is the California dream over for those on middle incomes? Fox & Hounds this week examines the middle income housing affordability crisis in Southern California which they say has been developing for more than four decades as house price to income ratios have doubled and tripled above historical levels.

Heading out to Hawaii, GovBeat says that the Aloha State has raised the smoking age to 21, mostly in response to the growing popularity of e-cigarettes.