The aftermath of the Great Recessions has seen inequality in the U.S. and other developed nations increase to unprecedented levels. But how do parties on each side of the ideological spectrum react to inequality? In new research which examines political parties’ election messages across 40 democracies, Joshua D. Potter and Margit Tavits find that parties on the left push economic messages during times of higher inequality, while those on the right tend to focus on values-based social issues when voters are especially religious or there is significant societal concern about immigration or ethnic fractionalization.

For a number of years, scholars have been debating how economically poor, but socially conservative voters experience politics and are courted by political parties during elections (notable examples of this inquiry are Thomas Franks’ landmark What’s the Matter with Kansas as well as follow on work from Larry M. Bartels). Because these voters are potentially “cross-pressured” by conflicting socially rightist and economically leftist tendencies, they serve as an interesting test bed in which scholars can evaluate the electoral effectiveness of leftist and rightist party messages. The conventional wisdom emerging from the American context is that leftist parties should pivot toward redistributive economic messages while rightist parties should emphasize social values issues, such as abortion, religion, and nationalism.

There is very little cross-national work examining this link outside of America, but our recent research shifts the inquiry into the international realm by examining the messages that hundreds of political parties emphasize during electoral campaigns in more than 40 democracies. We find that the ways in which parties of the political Left and Right talk to voters is complicated and heavily mediated by several large scale social factors. That is, it is of course not the case that leftist parties only emphasize economic issues while rightist parties only emphasize social issues when it comes to courting the electoral support of cross-pressured voters.

Rather, we find that the level of income inequality in a society fundamentally reshapes the natural electoral constituencies for the Left and Right and forces these two types of parties into markedly different messaging strategies. Furthermore, parties of the Right are somewhat constrained by additional factors, such as the extent of religiosity in the population, the degree of ethnolinguistic fractionalization, and immigration levels. Where these large-scale variables tend toward low levels (or, put differently, when “societal demand” among voters for values-based representation is low), parties of the Right tend not to make appeals to social values, even when economic inequality is on the rise.

Why do economic inequality and societal demand have such a dramatic effect on the ways in which parties represent their policies to voters? We argue that leftist parties emphasize economic issues in their campaigns when inequality is high, while rightist parties do not. This is because inequality creates large swathes of relatively poorer voters in the electorate and — due to the fact that leftist parties espouse redistributive economic policies — this increases the size of the Left’s voting constituency. Around the world, when inequality increases, parties of the Left systematically shift their representational efforts toward economic issues because these are winning issues for the Left.

By contrast, we argue theoretically and find empirically that rightist parties are systematically unlikely to emphasize economic issues when inequality is high. This is due to the fact that their pro-market economic orientations fail to resonate with relatively poorer and potentially cross-pressured voters who would benefit from government-directed redistribution. Rather, we would expect parties of the Right to pivot toward more socially-grounded, values-based issues. Figure 1 below illustrates a summary of our empirical results. Points to the right of 0 indicate that increasing inequality increases that type of rhetoric in party election platforms; points to the left indicate that increasing inequality decreases that type of rhetoric. Confidence intervals — or measures of statistical uncertainty — surround precise point estimates of the effect derived from our regressions.

Figure 1 – The impact of increasing economic inequality on the types of statements in leftist (blue) and rightist (green) parties’ election platforms. 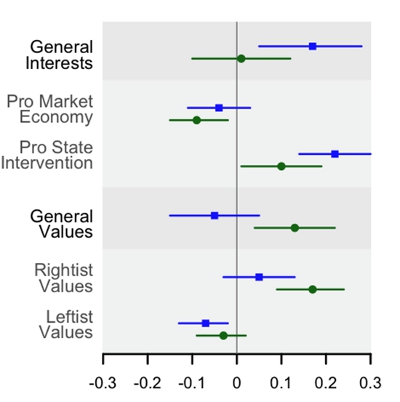 The graphic indicates that across hundreds of Leftist parties from around the world (depicted in blue in Figure 1), as economic inequality increases, these parties increase the amount of time they spend talking about economic interests (in general) and pro-state economic intervention (in particular). By contrast, across hundreds of Rightist parties from around the world, a commensurate increase in inequality does not prompt a similar emphasis on economic interests, but does elicit much more emphasis on values-based social issues (in general) and on values traditionally associated with the Right (such as nationalism), but not values associated with the Left (such as multiculturalism).

But we also uncover another fascinating relationship: parties of the Right are more likely to pivot toward more social, values-based issues only when inequality is high and societal demand for values-based representation is high. Specifically, we find that when immigration rates are high or when voters are especially religious or when there is substantial ethnic fractionalization within society, then rightist parties have an alternative, non-economic narrative to emphasize with voters. These variables are indicators of what we call “societal demand” for values-based representation and, where they exist, parties of the Right have an opportunity to cross-pressure poorer voters.

In Figure 2 below, we bundle together our indicators of societal demand into one aggregated variable that ranges from -4 to +4, where more positive numbers indicate a society that has some combination of highly religious voters, high immigration rates, or high levels of ethnolinguistic fractionalization. We run regression models only on right-leaning political parties to explore the effect of increasing economic inequality conditional on levels of societal demand. Where the blue line slopes upward and its confidence intervals are bounded away from the 0 line, we recover a statistically discernible difference. That is, it is only at higher levels of societal demand that increasing economic inequality systematically pushes parties of the Right to emphasize values-based rhetoric in their election platforms.

Figure 2 – The impact of increasing economic inequality on the types of statements in rightist parties’ election platforms conditional of the level of societal demand. 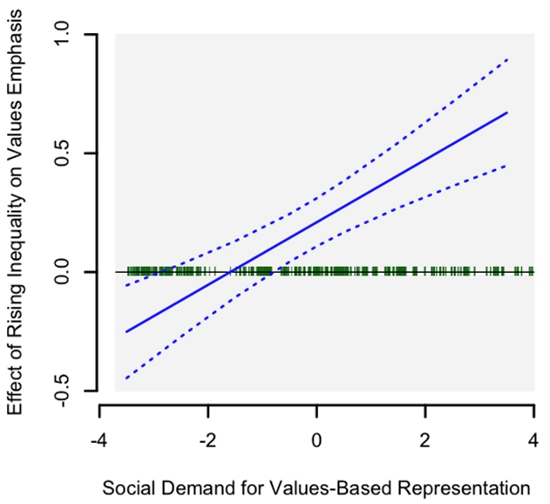 The implications of our findings are relatively straightforward. Parties of the Left almost always possess incentives to cater to voters’ economic needs during times of high economic inequality. We see this logic borne out repeatedly around the world; for example, left-learning parties in Germany, Sweden, and the Czech Republic have all exhibited an historical trend toward greater emphasis on economic interests in their platforms during periods of high inequality. When inequality lessens, these same parties retreat from economic emphasis and spend more time talking about a broader set of issues.

The story for the Right is somewhat more complicated. Across the world, rightist parties vary significantly in the tone and timbre of their campaigns. In more homogeneous and secular countries (such as Denmark or Germany), the main rightwing parties are socially liberal and focus mostly on economic issues. However, in more diverse and religious societies (such as Switzerland or Poland or, increasingly, the United Kingdom), they are socially conservative with a focus on traditional moral values or nationalism.

This article is based on the paper, ‘The Effect of Inequality and Social Identity on Party Strategies’, in the American Journal of Political Science.

Note:  This article gives the views of the author, and not the position of USApp– American Politics and Policy.