Last year, President Obama used an executive action to delay deportation and grant work permits for unauthorized immigrant parents, an action which has subsequently been halted by the courts. In new research, Pia M. Orrenius and Madeline Zavodny examine the effects that this type of temporary relief has on the migrant labor market. By studying the labor market outcomes of Salvadoran migrants, they find that granting temporary legal status leads to higher earnings among men and a higher employment rate among women.

Whether it’s at the camps at Calais or trekking through the rugged brush in South Texas, people are on the move in search of better opportunities. Policy makers around the world are struggling with what to do with streams of unauthorized migrants, many of whom are not readily removed because they have pending asylum claims or are long-term residents in the destination country. Whether in Europe or the United States, irregular migrants want work and tend to find it. But irregular work is increasingly problematic in a post-9/11, post-7/7 world, as enforcement intensifies and employers who skirt laws avoid taxes and underpay workers.

It’s become increasingly clear that if and when US immigration reform comes, it won’t be in the form of permanent residency and a path to citizenship, or ‘amnesty.’ It will likely be a version of renewable temporary permits, similar to DACA, or like the regularization programs in European countries such as Italy and Spain that also offer temporary, renewable status. In the United States, implementing DAPA would affect an estimated 4 to 5 million undocumented immigrants, and a full-scale reform could affect as many as 11 million, yet we know very little about the labor market effects of this type of temporary administrative relief. In recent research, we address this gap.

The United States occasionally offers temporary protected status (TPS) to migrants whose countries are experiencing civil unrest, violence, or a natural disaster. Most recently, it was extended to the countries suffering the Ebola epidemic. Migrants who have TPS typically cannot be deported, and they are permitted to work legally in the United States. As of early 2014, more than 340,000 migrants had TPS.

Our research examines how migrants from El Salvador who are likely to have benefited from a TPS program in 2001 fare in the US labor market relative to those who arrived too late to qualify for the program. Salvadoran migrants’ TPS status has been renewed ten times since 2001, most recently in early 2015. As a result, Salvadoran migrants who were in the United States in early 2001 and received TPS have been allowed to live and work in the United States continuously ever since. About 290,000 Salvadorans were initially granted TPS, and some 204,000 currently have it. We use data from the 2005 and 2006 American Community Survey (ACS) to examine labor market outcomes among likely TPS beneficiaries from El Salvador and compares Salvadorans to migrants from Mexico, who have never been eligible for TPS.

Our results suggest TPS leads to large positive earnings effects for men and large employment effects for women (see Figure 1). Less-educated Salvadoran men who are likely to have received TPS earn about 13 percent more, conditional on being employed, than similar immigrants from Mexico. Three-quarters of the increase in earnings is due to TPS beneficiaries working in higher-paying occupations. Men are also about 6 percentage points less likely to be employed. Lower employment arises from greater unemployment, not from lower labor force participation, suggesting men with TPS are more selective about the jobs they take. 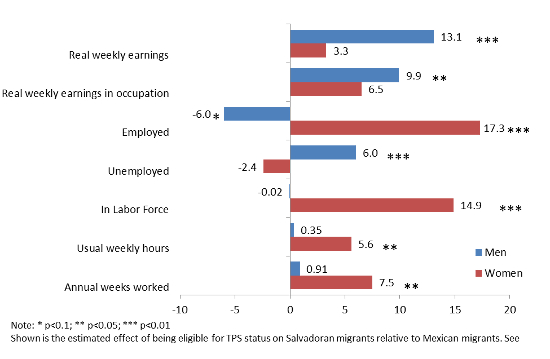 Less-educated Salvadoran women who receive TPS appear to enter the labor force and work, in contrast. The relative employment rate among Salvadoran women who are likely to have received TPS increases by more than 17 percentage points, and their labor force participation rate increases by about 15 percentage points. Their usual weekly hours worked increase by almost 5.6 hours, and their annual weeks worked increase by about 7.5 weeks. Gaining legal status eases fears that working will lead to discovery and deportation, a factor which contributes to this surprisingly large increase in women’s labor supply. Women could also work more in response to the decrease in men’s employment.

Taken as a whole, the results indicate that having even a temporary work permit significantly improves migrants’ labor market opportunities. Less-educated Salvadoran men who receive TPS are able to move into better jobs and become more selective about the jobs they hold, increasing their earnings but also their job search and unemployment incidence. Concomitant with the increase in less-educated men’s unemployment, less-educated women are more likely to enter the labor force and work.

The impact of TPS among Salvadoran migrants suggests DACA and, if it ever moves forward, DAPA, are likely to have a sizable effect on beneficiaries. Those populations dwarf the number of TPS beneficiaries by an order of magnitude. It remains to be seen how those programs affect not only beneficiaries but also the native-born workforce and whether there is any impact on future immigrant inflows.

This article is based on the paper ‘The Impact of Temporary Protected Status on Immigrants’ Labor Market Outcomes’, in American Economic Review: Papers & Proceedings 2015.

Pia M. Orrenius – Federal Reserve Bank of Dallas
Orrenius is vice president and senior economist at the Federal Reserve Bank of Dallas, where she focuses her research on regional economic growth and demographic change. She has published extensively on the labor market impacts of immigration, unauthorized immigration, and U.S. immigration policy, and she is coauthor of the book Beside the Golden Door: U.S. Immigration Reform in a New Era of Globalization (2010, AEI Press).  She is also adjunct professor at the Hankamer School of Business, Baylor University, and research fellow at The Tower Center for Political Studies at Southern Methodist University as well as the IZA Institute of Labor in Bonn. She has been adjunct scholar at the American Enterprise Institute since 2010. Orrenius was senior economist on the Council of Economic Advisers in the Executive Office of the President, Washington D.C. in 2004-2005.

Madeline Zavodny – Agnes Scott College
Madeline Zavodny is a Professor of Economics at Agnes Scott College in Decatur, Georgia. She is also a Research Fellow of the Institute for the Study of Labor in Bonn, Germany, and an Adjunct Scholar at the American Enterprise Institute in Washington, DC. Her primary research interests are labor and health economics and economic demography. Much of Zavodny’s recent research has focused on economic issues related to immigration. She is a co-author of The Economics of Immigration (Routledge, 2015) and Beside the Golden Door: U.S. Immigration Reform in a New Era of Globalization (AEI Press, 2010).