It has now been more than a year since the US began military action against the Islamic State in Syria and Iraq. Since the war began, President Obama has repeatedly requested that Congress give the authority for the action, but Congress has made little progress in that direction. Ryan C. Hendrickson places most of the blame for Congressional inaction on the Speaker of the House, John Boehner. He argues that Boehner’s lack of desire for a vote is expanding the president’s war powers – powers that, constitutionally, Congress should be exercising much more oversight of.

One year ago last week, President Obama responded to the growing threat of the Islamic State in Syria and Iraq (ISIS) with military action. The official start date for this war was August 8, 2014, when new strikes in Iraq ensued, which was followed with strikes in Syria, and later the deployment of 3,500 ground forces.

At the onset of this war, Obama explicitly requested Congressional approval for his military action. However, with the 2014 midterm elections forthcoming and the Speaker of the House John Boehner’s (R-OH) unwillingness to answer the call, Congress chose not to respond.

In February 2015, and hundreds of strikes later, Obama again requested authority for this military conduct against ISIS , but this time provided specific language and an actual resolution for Congress to consider.

Much of the blame for Congress’s deference rests with the leadership of Speaker Boehner. Earlier this summer, Boehner decided that Obama’s war authorization was not good enough and asked the president to write a new resolution for Congress to consider. To be clear, Boehner just does not want to vote on war, all while President Obama expands the perceived authority of the commander in chief. 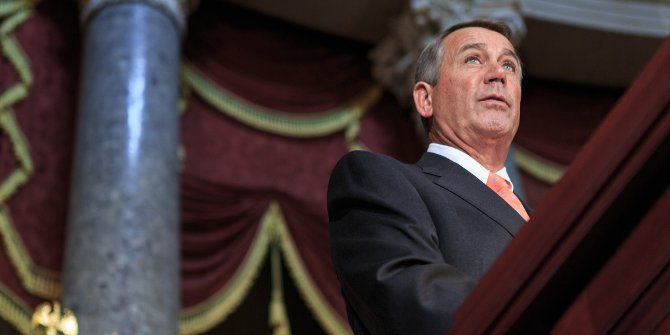 Boehner did much the same in 2011, when many members of Congress begged for an authorization vote on President Obama’s war in Libya. The Speaker eventually was forced to allow for such a vote, three months into the operation, but in the process helped defeat the more aggressive resolutions aimed at limiting Obama’s stated war powers authority.

Similarly, in 2010, Congress, using voice vote and unanimous consent procedures, which do not require members of Congress to explicitly vote, permitted American military operations against Ugandan human rights violator Joseph Kony. Again, under Boehner’s leadership, members of Congress really did not have to take a stand on this issue, and instead let President Obama place more American troops on the ground without meaningful congressional oversight.

By nearly all accounts, Congress has also given wide discretion to President Obama in his use of drone warfare in Pakistan, Yemen, Afghanistan and Somalia.

Speaker Boehner is rapidly accruing a sustained legacy of war powers deference to the commander in chief, despite the Constitution’s clear mandate that it is only Congress who can declare war, and not the president. What makes Boehner’s actions unique is that, as the House’s leader, he has been so actively involved in ensuring that Congress avoids its war powers responsibilities across so many different American military operations.

It is not that Congress simply defers to the commander in chief.  A handful of members, including Congressman Adam Schiff (D-CA) and Senator Tim Kaine (D-VA), have pleaded with their leaders to allow for a vote.

Instead, Congress’s leaders, especially Boehner, have consciously worked to avoid taking an up or down vote on such questions, and thus foster the conditions for this abdication of power to the commander in chief.