Do ballot initiatives help to improve people’s knowledge about politics? In new research which uses election survey data from more than 120,000 voters across 48 states Nicholas R. Seabrook, Joshua J. Dyck and Edward L. Lascher, Jr. find that ballot initiatives have no positive effect on general political knowledge. They write that these results hold no matter how often ballot initiatives are used, how many initiatives are on the ballot during an election, and how much money was spent by the initiative’s supporters and opponents.

Many scholars and public commentators have claimed that citizens will be more informed, knowledgeable and aware if granted a greater stake in their democracy.  The logic is that by transferring the choice burden to citizens, they will take a collective greater interest in public affairs and make better decisions.  (In our more cynical moments, we suspect some also think the skies will open, the flowers will bloom, and people will join hands in the streets singing songs of triumph and togetherness.)  We agree that it would be nice if people were generally more informed about politics, government, and public affairs.  But the matter is made more poignant when we realize that the average American spends more time Keeping Up with the Kardashians than contemplating Capitol Hill.  Our own investigation into the relationship between the initiative process and political knowledge indicates that voting on ballot measures does not provide even a partial tonic to the problem of declining civic engagement.

Unlike electorates in most other democracies, U.S. citizens living in about half the states typically and repeatedly need to make decisions about specific policy questions.  These matters are placed on the ballot by collecting sufficient signatures through the initiative process, enshrined in many state constitutions.  In recent years, scholars have become increasingly interested in the effects of the state initiative process on civic engagement.  More specifically, some have claimed that the ballot initiative process makes people more knowledgeable about politics generally.  The underlying idea is essentially that “more is better.”  That is, a greater volume of information supplied to citizens and increased opportunities to make political decisions will cause people to learn more about government and politics.

Proponents essentially claim two mechanisms may be at work.  First, ballot measures may enhance citizens’ sense of political efficacy by giving them a stronger sense of their ability to affect policy.  This will motivate them to better understand political topics.  Second, initiatives may increase media coverage of politics, thereby providing people with non-costly information and in turn increasing their knowledge.

Yet there are good reasons to be skeptical.  Recent empirical literature has failed to support a connection between the ballot initiative process and political efficacy.  Only specific types of information have been shown to increase political knowledge, and these may not include the types that are typical produced for mass media initiative campaigns.  And some social psychology literature suggests that facing a larger number of decisions may actually be demobilizing rather than encouraging greater interest and involvement.

We decided to subject the knowledge claim to a more thorough examination than had been the case previously, using better statistical techniques and improved data. We analyzed extensive survey data from the 2004 and 2008 National Annenberg Election Surveys (NAES) and the 2006 Cooperative Congressional Election Study (CCES). Together, these organizations surveyed more than 120,000 American voters across three general elections asking questions designed to measure the levels of general political knowledge of those responding.  We paired this data with a variety of measures of exposure to ballot initiatives.

While previous studies have used opinion polls with significantly smaller sample sizes, as well as problematic sampling methods for estimating state level effects, these more recent surveys were specifically designed to achieve representative samples of voters across all 48 of the contiguous United States (Hawaii and Alaska were excluded due to data limitations). We also utilized more sophisticated hierarchical statistical modeling techniques to appropriately analyze the effects of both state and individual level predictors of general political knowledge. The results could not be clearer.

Figure 1 – % Effect of having the initiative process (0,1) on political knowledge 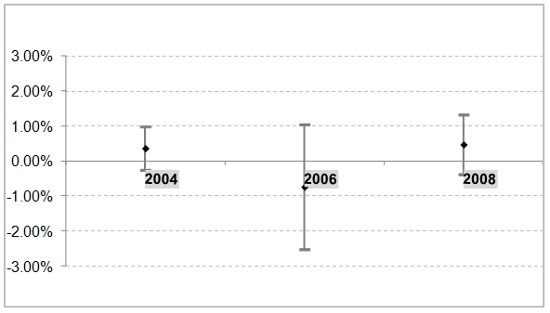 Figure 2 – % Effect of 1 additional initiative per year, on average, on political knowledge 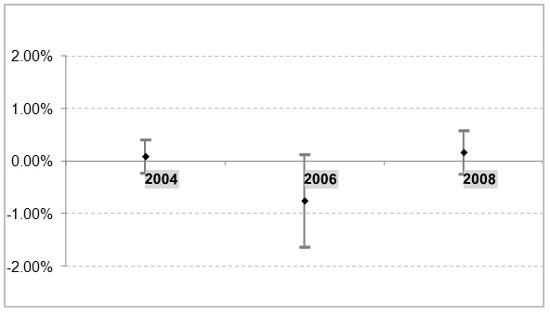 As Figures 1 and 2 illustrate, across all three elections, none of the measures of ballot initiative usage or exposure were associated with a significant positive effect on general political knowledge. This finding holds whether knowledge was measured using a series of factual questions about government, or based upon the interviewer’s subjective evaluation of the respondent. Furthermore, these results were consistent across respondents in states, like Oregon and California, which vote on ballot initiatives frequently, as well as those in states that have direct democracy but rarely if ever use it, such as Mississippi or Illinois. As Figures 3 and 4 show, it also made no difference how many initiatives were on the ballot in a given election, or how much money was spent during the campaign by supporters and opponents – there was simply no reliable evidence that ballot initiatives serve to increase citizens’ levels of general political knowledge in any significant way. 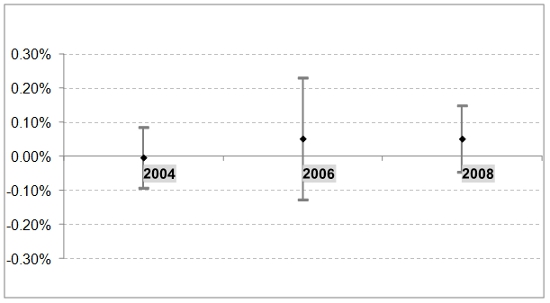 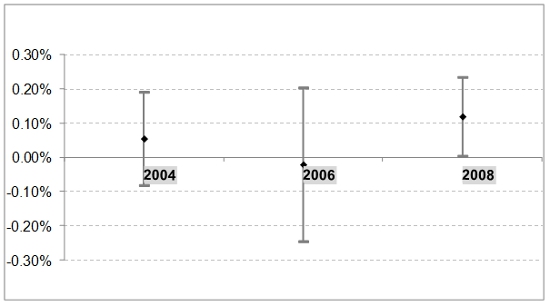 Nor can our results be explained by differences in state participatory culture, or by a possible historical trend towards higher turnout states being more likely to adopt the initiative process in the first place. Using a propensity score matching algorithm to compare voters in states with and without direct democracy, we found no underlying differences between the populations of voters in initiative and non-initiative states in terms of the determinants of political knowledge. This gives us a great deal of confidence that any effects of direct democracy, or lack thereof, uncovered in the multi-level models stem from the actual effects of exposure to and frequency of ballot initiative use, rather than differences in the underlying populations.

It is possible that direct democracy may help increase citizens’ levels of knowledge about policy-specific issues, especially those that may be under consideration on the ballot in a given election.  Yet there is no evidence that the use of direct democracy has any positive effect on citizens’ overall levels of political knowledge outside of this limited context. Our findings should be sobering for advocates of participatory theory and direct democracy who have argued that direct democracy is at least a partial cure for voter apathy, as well as for scholars who have offered more favorable overall assessments of the ballot initiative process generally. And for Europeans hearing claims that adoption of direct democracies in their own countries would help to invigorate citizen political engagement, our advice is “be suspicious.”

This article is based on the paper, ‘Do Ballot Initiatives Increase General Political Knowledge?’, in Political Behavior.

Joshua J. Dyck – University of Massachusetts Lowell
Joshua J. Dyck is Associate Professor of Political Science and Co-Director of the Center for Public Opinion at the University of Massachusetts, Lowell. He studies American politics, with a focus on public opinion, voting behavior, and state politics. Much of his research is motivated by the interplay between public opinion and different social and institutional settings, examining the way that democratic citizens react to democratic environments and political institutions.