Women in abusive relationships are able to petition the courts for a civil restraining order. While these restraining orders can promote women’s safety, in new research, Melanie Hughes and Lisa Brush find that they can be accompanied by serious financial hardship for women. They find that in the year after petitioning, women lose an average of $1,018 as a result of taking time off work or other factors related to the abuse itself. They also find that for many women, welfare payments can act as a buffer from some of the worst economic losses associated with abuse. In light of their findings, policymakers should consider economic assistance for women trying to exit abusive situations, regardless of their income.

Many women are trapped in relationships with men who abuse them. This abuse is costly to society and to individual women and their families. Abuse jeopardizes women’s autonomy, dignity, and well-being, and takes a toll on their pocket-books. Property loss and damage, expensive medical and mental health bills, and homelessness are among the costs. Other costs are work-related, including interrupted education and job training, reduced work hours and wages, and employment instability.

One way a woman can protect herself from abuse is to petition the courts for a civil restraining order. These orders, which forbid the abuser from contacting the petitioner, are enforceable across jurisdictions and throughout the United States. Research shows that restraining orders can promote women’s safety. In theory, then, turning to the police and courts for protection could also help put a stop to the many ways that abuse interferes with women’s work, thereby helping women to increase their earnings. In reality, our research finds overwhelming evidence that petitioning for a restraining order is accompanied by serious financial hardship for women. Leaving home, moving and changing jobs, and going to court can all get in the way of women’s earning money.

Our study is the first to systematically examine how women’s earnings change when they turn to the police and courts to help put a stop to abuse. We followed the earnings of more than 3,900 women in Allegheny County, Pennsylvania who petitioned for a restraining order against an abuser. We looked at their earnings from paid employment before and after they petitioned to see whether women’s earnings changed, and if so, for how long. We found that when women petition, they lose money. Costs showed up as short-term shocks to their earnings in the months just before and after they petitioned. We also saw longer-term stalls in women’s earnings growth, even a year after they petitioned. For some women, we were able to look even farther out, and we found no evidence these women recouped their lost earnings.

We do not think that petitioning for a restraining order is the cause of lost income for women. Instead, it is the abuse—and efforts to end that abuse—that has negative consequences for women. Women may need to take time off of work to go to court, to seek medical attention, or to look for safe and affordable housing. For hourly workers, this time away from work means women are not earning money. It is also important to recognize that for some women, petitioning for a restraining order may not put an end to the abuse. In fact, as women take steps to end abuse, their current and former husbands and boyfriends may even step up abuse in ways that further damage their economic prospects.

To put these economic losses in perspective, we estimated how much money women lost in the year after they petitioned. We looked at their initial earnings growth and then how their earnings changed. As shown in Figure 1 below, we calculated that women lost around $1,018 (more than one month’s rent) through the year after petitioning for a restraining order.

Figure 1 – Calculating lost earnings: If women’s earnings had grown steadily through the year after petitioning for a restraining order, they would have earned $1,018 more 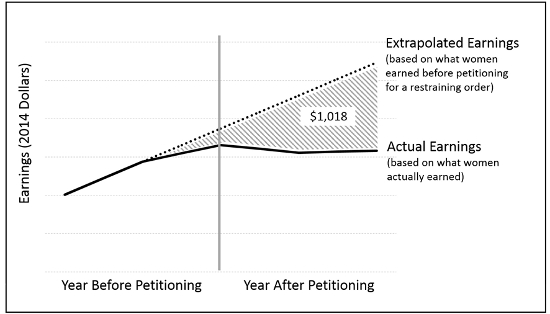 To be clear, we studied the effects of petitioning for a restraining order, not the effects of receiving one. In fact, 55 percent of the women we studied petitioned the court for an emergency 10-day protective order but stopped there. These women were not granted or did not seek a hearing for a longer-term order (lasting 12 to 18 months). We expected that women with scheduled hearings for longer-term orders might have better outcomes than women with only emergency petitions. Surprisingly, however, we found little difference between these two groups.

Persistence through the court system paid off for only one group of women—those who were on welfare before they petitioned for a restraining order. These women did not experience the same earnings losses as all other petitioners in the study. That is, a combination of welfare and persisting through the court process appears to buffer women from some of the worst economic losses associated with abuse. Our study shows that welfare can be a crucial resource for women in abusive relationships. Rolling back welfare programs, requiring welfare recipients to work, and setting rigid time limits on welfare may therefore put women in a dangerous position.

Of course, not all women have access to welfare. Many of the women in our study who experienced financial losses earned too much to qualify for welfare. But, women living above the poverty line also need economic support during this tumultuous and difficult time in their lives. Policymakers should consider economic assistance for women trying to exit abusive situations, regardless of their income level.

Our study also raises questions about the way U.S. policies and practices privilege work as the way out of abuse. Many women do not have the financial means to leave abusive situations, and they find themselves trapped by both poverty and abuse. Women are especially vulnerable when they depend on the abuser for economic support. Employment can help women to get out of the house (where “domestic” violence is thought to happen), build supportive networks, and establish economic independence. At the same time, however, it can be very, very difficult for a woman to earn her way out of being trapped by abuse. Women need more than just a job to live safe and economically secure lives.

Women petitioning for restraining orders experience tremendous economic instability. It is not only the costs of abuse, but also the price of protection, that contributes to earnings inequality and women’s economic insecurity. The economic losses women almost universally experience when petitioning for a civil restraining order call out for researchers, advocates, and policymakers to develop strategies to enhance gender equality and women’s safety and economic stability.

This article is based on the paper, ‘The Price of Protection: A Trajectory Analysis of Civil Remedies for Abuse and Women’s Earnings’, in the American Sociological Review.

Melanie M. Hughes – University of Pittsburgh
Melanie M. Hughes is Associate Professor of Sociology at the University of Pittsburgh. She uses quantitative approaches to study women’s empowerment, often focusing on groups of women who are particularly marginalized. She is coauthor of Women, Politics, and Power: A Global Perspective (3rd Edition forthcoming with CQ Press). Her scholarship on women in politics has also appeared in journals such as American Sociological Review, American Political Science Review, and Social Forces.

Lisa D. Brush – University of Pittsburgh
Lisa D. Brush is Professor of Sociology and of Gender, Sexuality, and Women’s Studies at the University of Pittsburgh. Her first book was Gender and Governance (Rowman and Littlefield 2003), and her second book was Poverty, Battered Women, and Work in U.S. Public Policy (Oxford University Press 2011). Her current collaborations investigate preventing adolescent relationship abuse and teen dating violence by engaging high school and middle school boys in coached athletic programs to change masculinities.