Does adopting a constitution lead to better democracy? Not necessarily, write Todd A. Eisenstadt, A Carl LeVan, and Tofigh Maboudi, who studied 138 constitutions from a 37 year-period. They find that in many countries, the constitution-making processes did not incorporate broad public consultation, meaning that the drafters were often able to grab power by codifying benefits for themselves and for their supporters.

In his first visit to Tunisia as the Secretary of the State in February 2014, John Kerry told Tunisian President Mohamed Moncef Marzouki that the United States is impressed with the country’s new, democratic constitution.  “The Tunisian people have ratified a new constitution, a constitution that is rooted in democratic principles – equality, freedom, security, economic opportunity, and the rule of law,” he said, “and it is a constitution that can serve as a model for others in the region and around the world.”  But other countries in the region did not have such promising results. In fact the country that inspired the Arab Spring is the only Arab democracy with political rights and civil liberties similar to those of the Western democracies, thanks to its democratic constitution. But why haven’t social movements in nations such as Egypt and Morocco led to democratic transitions, despite extensive efforts to craft new constitutions?

These countries are not alone, and are part of a worldwide trend towards “hybrid” regimes that mix features of democracy with authoritarianism. In recent research we studied a sample of 138 constitutions between 1974 and 2011 and find that three years after these constitutions were approved, over half of them did not improve levels of democracy. The reason, we argue, is that most of these countries did not incorporate broad public consultation which, unlike constitutional processes of the 18th century, is so vital for the democratic outcomes of constitutions.

We divided constitution-making into three phases: drafting, debating, and ratification. We find that broad representation of a range of societal actors during an open, participatory drafting phase had lasting benefits for democracy. The debating phase, when legislators and assemblies discuss document drafts, and ratification, when the public approves a new constitution via referendum, do not have the same effects on whether democracy takes hold. The best insurance against authoritarian backsliding in fledgling democracies, we conclude, is a broad-based, participatory constitution-making process with extensive, direct citizen input.

Our findings decisively show that development assistance might be much better spent helping convince constitution-drafting governments to welcome opposition parties, unions, human rights organizations and interest groups to contribute to a robust debate. Domestic and international energies should be devoted to avoiding the “original sin” of exclusionary drafting of constitutions, rather than in supporting the civic religion of voting for whatever document results.

In other words, what matters is who is in the room when the constitution is initially conceived.  We feel this is because no amount of societal vetting after the fact can make up for incumbent government failures to incorporate a wide range of societal interests, citizens, and political groups at the moment the dialog starts. Venezuela’s 1999 convocation of a constituent assembly stacked with Hugo Chavez cronies, for example, did not have the same democratic result as Tunisia’s 2011 widespread call for change, which elected a constituent assembly, composed of members from divergent ideological and political backgrounds including both Islamists and seculars. The main concern of Tunisia’s first democratically elected National Constituent Assembly was finding how to prevent a potential backslide to authoritarian rule— which was the unfortunate destiny of Egypt —and they found it in an “open door” constitution-writing process.

Such ideals of constitutions as tools to mediate differences, lay out rights, and establish common trust in a set of governing institutions has fallen on hard times, especially over the last 20 years.  Iconic democracy-founding constitutions in Eurasia after the fall of the Berlin Wall have given way to more cynical exercises of constitutions as “window dressing” in Africa, Latin America, the Middle East, and elsewhere. They have become as much about preserving the prerogatives of dictators and hybrid regimes as about planting the seeds of democratic expectations and norms.

The key question centers on the motivations of those who call for a constitutional convention (convokers). These initiators know in advance whether they want to fortify their nation’s stability by fortifying democratic fabric, or whether, instead, they want to grab power by codifying benefits for themselves and their supporters. Inclusive and widespread participation helps reduce the risk.

In short, constitution writers’ intentions can be easily evidenced by the company they keep, or at least convoke. It is very difficult for popular participation at the ratification stage to rectify a “top down” drafting process. Of course, once they are in the room, these prospective drafters must also be able to express themselves and contribute to the debate.

That the process of drafting constitutions matters (sometimes even more than what the documents actually say) should help policymakers re-orient support for constitutions and constitution-making. It’s time to correct the frequency of “back end” ratification referendums that in part rely on development assistance for these ceremonious celebrations of democracy with smiling citizens with inked-thumbs up at voting urns. Instead, let’s help Tunisia and other newly-constituted states celebrate enduring annual civic holidays to honor the implementation of democratic and rights-driven constitutions and the responsive government these can produce.

This article is based on the paper, ‘When Talk Trumps Text: The Democratizing Effects of Deliberation during Constitution-Making, 1974–2011’, in the American Political Science Review.

Carl LeVan – American University
Carl LeVan, assistant professor in American University’s School of International Service, is the author of Dictators and Democracy in African Development: the Political Economy of Good Governance in Nigeria and can be found on Twitter @Dev4Security.

Posted In: A Carl LeVan | Elections and party politics across the US | Todd A. Eisenstadt | Tofigh Maboudi 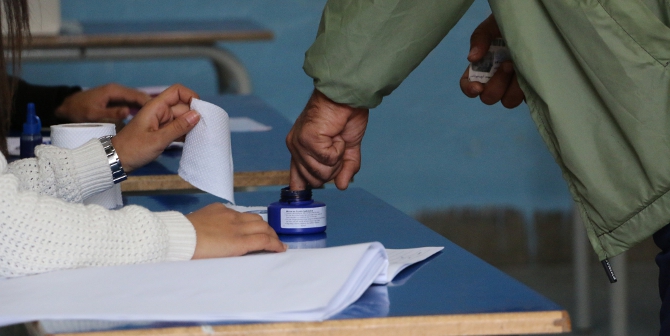