Local governments can interact competitively, which can affect their land use and taxation decisions in ways that harm the entire region.  They can also collaborate to provide services and reduce common threats, and they can conflict with each other directly such as through lawsuits.  We look at how to measure this fragmentation and related characteristics of local governments in metropolitan regions that economists and political scientists recognize as affecting how governments interact.  In our research, we develop several indices of local government fragmentation and related characteristics that have been measured for the largest 51 metropolitan regions in the US.  We show that there is significant variation in these characteristics across the regions, which may yield clues about how local governments interact and whether these interactions are beneficial or costly for individual governments and the region as a whole.

Although scholars, practitioners, and politicians agree that fragmentation is important, they disagree greatly about whether it and some forms of interaction, such as competition, are good or a bad for governments and metropolitan regions.   Does fragmentation promote competition and hinder collaboration?  Does competition between local governments promote efficiency as in private markets, or does it create sprawl through uncontrolled growth and economic development?   Is it possible for local governments in a highly fragmented region to resolve shared problems through voluntary interactions, or must there be a strong central authority to coordinate their actions and enforce mutually beneficial behavior from all?  While our research does not answer these questions, the indices we develop can be correlated with other regional characteristics that are important to the debate about the effects of fragmentation.

In addition to the two indices of fragmentation, one based on population and the other based on fiscal responsibility, we also created three further indices:

Both of the latter two characteristics- fiscal decentralization and importance of sales taxes- have been linked by scholars to behaviors that affect interaction of local governments.

Figure 1 below shows the combined fragmentation values on the population-based index for the top 10 and bottom 10 metropolitan regions in the US.  These values show the sum of the Z-scores for all six component measures of this index.  The table shows what many scholars know, which is that metropolitan regions in the Northeast and Midwest are more fragmented and regions in the South and West tend to be less fragmented.   Looking across the five indices shows that the Chicago, St. Louis, and Denver regions are similarly situated all of them.  They are more fragmented, their populations are more highly sorted, they are more fiscally decentralized with respect to state-local relations, and they are more driven by sales taxes.  On the other end of the indices, Norfolk, Greensboro, Charlotte, and Baltimore are less fragmented, have lower population sorting, are more fiscally centralized, and are less driven by sales taxes. 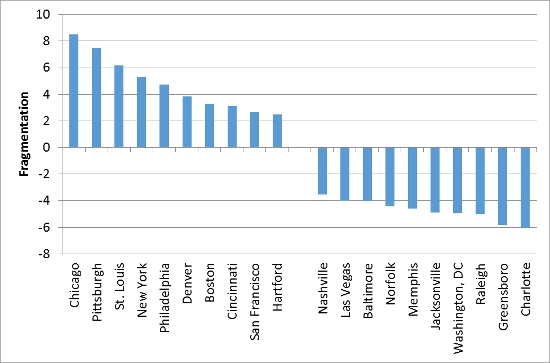 We also find that the population based index of fragmentation is positively correlated with population sorting.  This finding supports the logical conclusion of claims made by the well-known economist Charles Tiebout – that populations will be more segregated on social and demographic characteristics across local government, especially at the municipal level, in regions that are highly fragmented.   Tiebout argued that competition between governments would promote efficiency and that fragmentation would allow populations to sort themselves into local governments that provide the services they desire at tax levels they are willing to pay.  Such sorting, however, is likely to result in numerous local governments within a region in which the population is poor and immobile, which is not desirable for the citizens of these governments or the region as a whole.

Earlier this year, Richard Florida reported on our research in a CityLab article.  He showed how the population-based fragmentation index correlated with other regional characteristics such as population density, vote for Obama in 2012, share of commuters who take public transportation to work, and the concentration of high-tech industries.   Figure 2 below shows how this index correlated with income per capita in 2013, which suggests that local government fragmentation does not appear to harm metropolitan regions as Florida notes.  Although fragmented regions may be better off economically, they are more segregated, as demonstrated by the correlation between the population sorting index and average wages, and have higher income inequality. 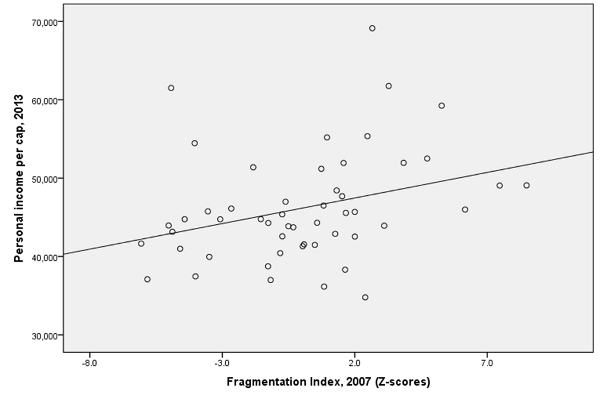 This article is based on the paper, ‘Macro-Level Determinants of Local Government Interaction: How Metropolitan Regions in the United States Compare’, in Urban Affairs Review.

Rebecca Hendrick – University of Illinois at Chicago
Rebecca Hendrick is a professor in the Department of Public Administration at the University of Illinois at Chicago. Her current research focuses on financial management of local governments and fiscal interactions (competition and collaboration) between local governments at a regional level, particularly in the Chicago metropolitan region. Her work appears in public administration, political science, and urban affairs journals.

Yu Shi – University of Illinois at Chicago
Yu Shi is a Ph.D. candidate in the Department of Public Administration at the University of Illinois at Chicago. Her research focuses on intergovernmental relations, collective actions, and public debt management. She is currently working on her dissertation, which explores the impact of fiscal federalism on government performance in the United States.