With the years of racially segregated sports now long behind us, many would consider that sports coverage is color-blind and post-racial. In new research which examines newspaper coverage of race, sport and genetics from 2003 to 2014, Matthew W. Hughey and Devon R. Goss find that this is not the case. They write that the media persistently reinforces the notions that African American’s athletic success is based on biology, while whites’ comes from hard work and intelligence. They also debunk the ideas often seen in the media that race has a biological reality which can be defined by genes, and that the historic process of slavery somehow eliminated ‘weaker genes’ from the African American population, making them a more athletic race.

For many, sport represents the ultimate color-blind space, affording a level playing field where only one’s training and skills are the hallmarks of competition.  Hence, racist and prejudicial beliefs and phenomena are both literally and figuratively, out-of-bounds.  Moreover, sport has been understood as an activity that promotes racial harmony amongst both participants and observers.  But such a claim is a bit simplistic.

To make sense of the correlation between different racial groups’ success and failures amidst different athletic events, many draw from the deep well of scientific racism to quench their thirst for explanatory knowledge.  For instance, some research has found that many athletes believe that white sporting success is attributable to intelligence, while nonwhite success is accredited to genetically predisposed bodies—a longstanding cultural trope known as “white brains versus black brawn”—that has been around for at least a century.  After African American boxer Jack Johnson became the heavyweight champion of the world in 1908, he precipitated a slow reconsideration of the assumption of nonwhites’ physical inferiority—a central tenet of early 20th century racial science and eugenics.  Fast forward to our contemporary moment and the banal ubiquity of this trope among sports commentators is well known, and was even recently panned by the comic duo Key & Peele.

Moreover, many athletic coaches employed racial-genetic beliefs in their appraisals of athletic performance: they interpret white success as the result of training, access to facilities, and hard work while non-white achievement is believed the outcome of natural speed, long limbs, and muscle mass. Even athletes who do not overtly employ racial-genetic explanations of athletic success are subject to such reasoning.  For instance, research shows that racial athletic performance leads whites to “opt out” of sports like track and basketball, whereas blacks often “opt in.”  Other studies indicate that athletic performance depends on “stereotype threat”: Blacks performed better on athletic tasks described as necessitating “natural” physical ability than those described as utilizing athletic “intelligence,” while whites showed the opposite pattern.  And even among today’s young and educated, these beliefs persist: U.S. college students believed the large black presence in the NFL is due to biological reasons (74 percent), opposed to socioeconomic factors (50 percent), culture (48 percent), and discrimination against white athletes (20 percent).  Yet, similar biological explanations were not used to explain white dominance in other sports: “… only blacks’ presence in a sport could be explained by biological characteristics, and even their absence from certain sports could be attributed to their ostensible physical capacities: e.g., lack of body fat to swim”.

This belief persists in mass media discussions of athletic performance—even by ostensibly “objective” journalists.  In our recent research, we relied on a content analysis of English-language newspaper articles dealing with the intersecting topics of race, sport, and genetics from January 1, 2003 (the completion of mapping the human genome) to June 1, 2014 (the publication of the controversial text, A Troublesome Inheritance: Genes, Race and Human History).  Drawing from three academic news databases and ten major United States newspapers over this 10-year span, we found two dominant narratives about athletics, genetics, and race.

(1) “Race” has a biological reality via defined genetic and genomic patterns.

(2) Weaker genes were eliminated from African American and West Indian populations—making them a super athletic race—due to the “social Darwinian” process of slavery.

Much of this “news” reporting was laughably (or sadly) erroneous.  For instance, while there are legitimate genetic clusters that are consistent with certain racial classifications, the problem is that genetic patterns can be consistent with any racial classification scheme one wishes to find. That is, if we believe there are five racial groups, we can then “find” five clusters of genetic material to match up with those five racial groups.  However, if we believe there to be fifty racial groups, we can also then discover fifty clusters of genetic patterns that seemingly validate the fifty-race schema. 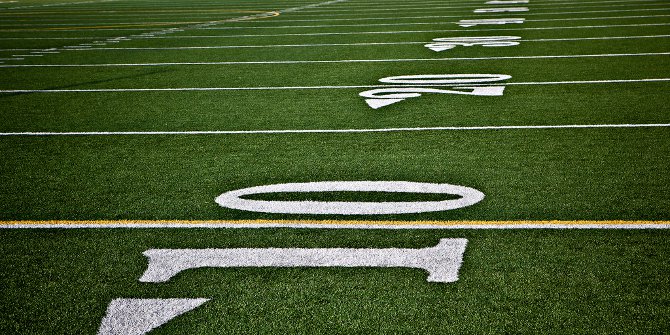 Also, the notion that slavery created a most un-natural selection process is preposterous. Even in laboratory conditions in which all variables (social and genetic) would be held constant, the reduction of a recessive allele that resides in 50 percent of a given human population would take over fifty generations to reduce it to 5 percent—a total time of approximately 1,500 years.  Even though the trans-Atlantic slave trade lasted approximately 350 years (1500 to 1850s), and was brutally oppressive, it varied in force over time and space, thus failing to provide a constant controlled setting.  So also, the demographics do not fit the theory.  The “best fit” among slaves (young and male) had the highest mortality rates: young adults experienced the highest mortality rates, and males died at about twice the rate of females.  The demographic data suggests that social behavior, of slaves and slaveholders (rather than the supposed naturally selected genetic physiology of slaves) is a much better explanation.

Given recent research that shows many whites to possess a severe racial bias in their perception of physical and cognitive tasks: whites are more likely to view blacks as physically superhuman, and less sensitive to pain than whites, but also as less capable than whites of engaging in everyday organization tasks that require patience and problem-solving, such as walking a dog, sitting through a baseball game, or even picking and eating a ripe avocado.

In this sense, we cannot isolate the biological resurgence of the “race” concept as only an issue of nonwhite biological performance, but also an issue of white cognitive ability.  To separate one from the other would only invite and enable more symbolic violence and material harm whereby we rationalize our decisions on how to treat differently racialized group by their supposedly “natural” and genetically determined traits.

In a day and age that more and more claim has become “post-racial” we have found a sharp and insidious reemergence of scientific racism in the everyday media that many consume.

The ANNALS of the American Academy of Political and Social Science (see “A Level Playing Field?  Media Constructions of Athletics, Genetics, and Race”)