Why we may need to reconsider the current one-size fits all approach to US housing policy.

Why we may need to reconsider the current one-size fits all approach to US housing policy.

Every year, the US federal government spends billions on low-income rental housing assistance. But is it spending this money effectively by using housing vouchers? In new research using panel data from rental units, Michael Eriksen and Amanda Ross find that the effects of housing vouchers vary from city to city. Introducing vouchers can drive up rents by increasing the demand of those who receive them for higher quality rental housing, but decrease demand and thus rent for lower quality accommodation. They show higher rent increases occur in areas where housing supply is inelastic due to a lack of developable land suggesting alternative place-based housing policies may be more effective in those areas. 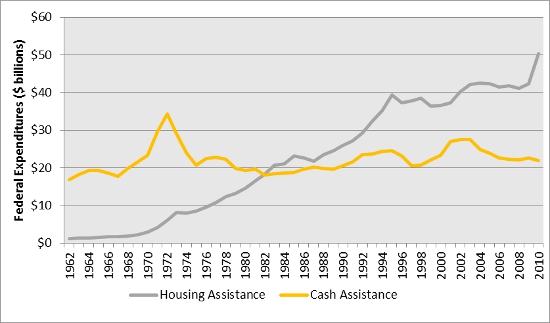 There has been a historical debate between policymakers on whether demand- or supply-based housing subsidies are the most appropriate.  The first housing subsidies were supply-side public housing projects built in the 1930s.  However, some argued against housing projects, stating that they created pockets of concentrated poverty and were not as cost effective as housing the poor in existing units.  As a result of these criticisms, over the last 35 years there has been a shift in housing assistance towards the demand-side practice of allocating vouchers to individual recipients who then find a qualifying rental unit in the private market.  This increase in the prevalence of housing vouchers nationwide comes despite prior evidence suggesting that vouchers may substantially increase rents for unsubsidized households in the neighborhoods where vouchers are used.

In recent research, we suggest that such a one-size fits all approach for housing policy in the US should be revisited.  We construct a panel of rental units from the American Housing Survey and test how a relatively large expansion in housing vouchers between 2000 and 2002 affected local housing rents of unsubsidized rental units.  A challenge faced by researchers is that cities with higher housing rents today tend to also have more vouchers. It is therefore difficult to disentangle whether these cities have higher rents because of vouchers, or whether policymakers allocated more vouchers to cities with historically higher rents.  Our innovation was to estimate the short-term changes in housing rent of individual units in response to plausibly independent increases in the supply of vouchers.

The key findings of our research is that while there was no overall impact on rents of individual units in metro areas with more vouchers, there were significant differences both within and across metro areas.  For example, we show that cities with more allocated vouchers experienced a moderate increase in rents for units near the maximum allowable rent limit in each city.  This increase was offset by an observed decrease in rents for those units with the lowest rent before the voucher expansion.  The intuition is that voucher recipients contribute the same amount towards rent, 30 percent of their gross income, given that it is under that maximum allowable rent in the metro area as determined by the US government.  In other words, the benefits of the program are structured such that receiving a housing voucher will lower a voucher receipt’s demand for low-quality rental housing, but increase the demand of those households for higher-quality rental housing.

The maximum allowable rent limit under the program is called the “Fair Market Rent” and is equal to the 40th percentile of housing rents in most metro areas.  Figure 2 illustrates how an increase in the supply of vouchers affected the subsequent rents of individual units based that units rent before the voucher expansion.  The x-axis is the figure is that unit’s rent before the voucher expansion divided by the “Fair Market Rent” in its metro area. 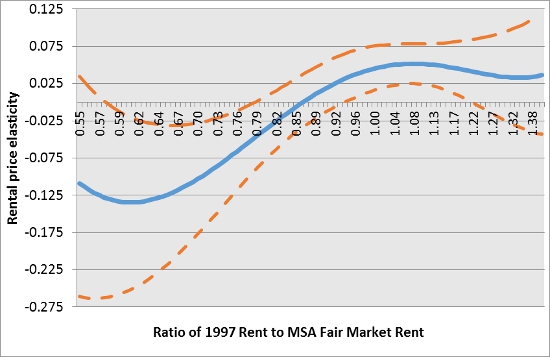 Note: Authors’ calculations from interacting the supply of vouchers with 5th order polynomial of an individual unit’s rent before the voucher expansion in 1997 to the Fair Market Rent for a unit of similar size in its MSA according to HUD. Dashed lines represent 90% confidence intervals.

Another important result of our research is our finding on the differences in the effect of housing vouchers on rental prices across different metro areas.  Advocates of demand or supply-side housing subsidies often make absolute arguments over which policy is best.  Demand-side policy advocates argue that it is more cost-effective to house low-income households in existing units instead of constructing units exclusively for that purpose.  Supply-side policy advocates argue that there is a fundamental shortage of “affordable” housing options and increasing the supply of units would not only decrease the rents of occupants, but also those in surrounding properties.

We find that the right answer may ultimately depend on the attributes of each local housing market.  We use series of interactions to show that the largest increases in rent with respect to an expansion in the supply of vouchers came in metro areas that were previously estimated to be relatively supply inelastic. These are areas (e.g., Los Angeles, San Francisco, and New York) where the amount of developable land is more constrained by geographic features such as proximity to a body of water or mountains.  In contrast, we find no measureable increase in rents in more elastically supplied metro areas (e.g., Cleveland, Atlanta, and Houston) where the ability to expand supply of housing is not as constrained.

Figure 3 illustrates estimated elasticity of increasing the supply of vouchers on housing rents based on how developable the land is in the local area.  A lower supply elasticity implies that the area had a more inelastic supply of housing. 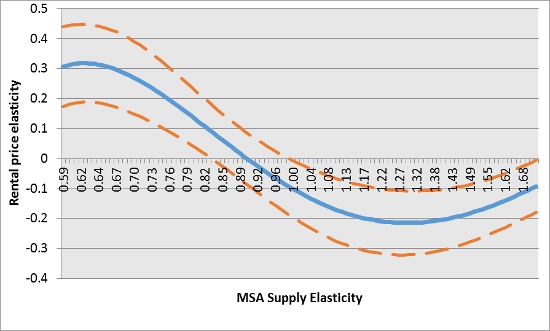 Overall, our research suggests that policy makers should take a more nuanced approached to housing subsidies in the future.  Instead of arguing which policy is best, future research and policy efforts attempt to understand which set of policies work best given the attributes of each local market.

This article is based on the paper ‘Housing Vouchers and the Price of Rental Housing’, in the American Economic Journal: Economic Policy.