Recent years have seen a rise in childlessness rates in the US close to levels not seen for more than a century. In new research which examines the drivers of childlessness then and now, Thomas Baudin, David de la Croix and Paula E. Gobbi find that while in the early 20th century poverty meant that many women were forced into having fewer children, better education and higher income for women are now the causes of childlessness.

Childlessness was much higher for the generation born at the beginning of the twentieth century than it is today. As Figure 1 shows, rates of childlessness for married women born between 1871 and 1915 fluctuated between 15 and 20 percent, while only 12 percent of women born in 1964-68 remained.  In new research, we provide a framework to understand the deep causes of childlessness and how their importance have changed over time. We find that the main causes of childlessness of 100 years ago have largely altered from poverty-induced necessity to a choice driven by higher levels of income and education among women. 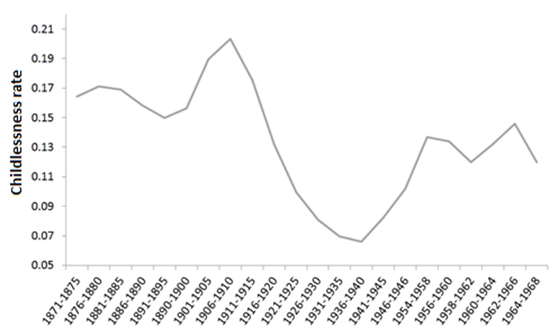 In our analysis of childlessness, we first looked at three reasons why individuals may remain childless:

First, natural sterility can randomly affect any individual. One can think of it as the minimum level of permanent childlessness that we can observe of the society, and is of the order of 2 percent, in line with data from the Hutterites, a group established as the demographic standard in the 1950s.

Second, social sterility, sometimes called poverty driven childlessness, describes the situation of poor women whose fecundity has been affected by poor living conditions. Indeed, lower-income groups are more exposed to sexually transmitted diseases, malnutrition, psychopathological problems, and environmental pollution than the rest of the population. The poor also have less access to quality medical services, which makes them more vulnerable to medical mistakes in abortions, and also have difficulty in affording fertility services.

Third, women can remain childless “by choice”. Most of these women are educated and tend to postpone marriage to invest more in their career, or have an opportunity cost to bear and rear a child takes time that is too expensive in terms of foregone labour income.

The observed U-shaped relationship between childlessness and the mother’s education, shown in Figure 2 below, is driven by the coexistence of social sterility and of a high opportunity cost of parenting for educated women. 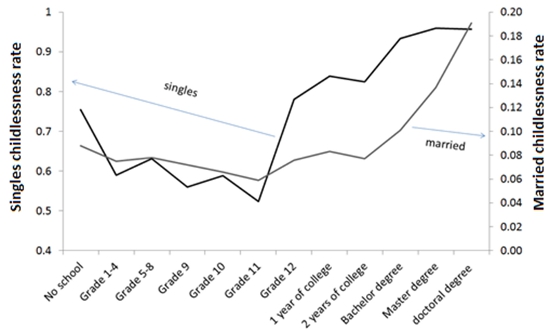 The breakdown of childlessness into its three causes just outlined helps to understand how it has changed over the last century. At the end of the nineteenth century, wages were low and people were generally poorly educated. This made levels of social sterility very high. In addition to the causes mentioned above, the Spanish Influenza epidemics, which particularly affected the generations born between 1890 and 1910, meant that pregnant women who were infected were particularly vulnerable to miscarriages. The Great Depression also impoverished these generations, for whom voluntary childlessness was almost absent.

The rise in both education and overall income allowed subsequent generations to escape from situations where couples were “constrained” from having children, and rates of childlessness began to fall. Over time, the nature of childlessness changed, becoming more and more the chosen outcome of many educated women. In recent years, more education has become more linked with higher rates of childlessness. Social causes of childlessness have now completely disappeared for married women. This is however not true for single women, who are usually poorer, for whom social sterility still exists.

Two other changes have been particularly important in recent decades: returns to schooling have increased and the gender wage gap has diminished, though the effect of these changes on average childlessness rates has been less important compared to those of education and overall income. The reason is simply that these changes affect the individuals that are in the tails of the distribution of education. As aggregate numbers are mainly driven by the middle educated group, the impact on childlessness from these changes are hidden. Since childlessness is particularly present at the tails of the education distribution, these two changes are however worth discussing.

First, the rise in income inequality and skill premiums in the U.S. makes those who have less education poorer (in particular single women) which increases social sterility. For the highly educated, the opportunity cost of having children is increased by higher skill premiums (for both men and women), and more of them choose to remain childless. On the whole, childlessness of the two sorts increases with inequality.

The closing of the gender wage gap has helped to make women better off, with fewer poor women experiencing social sterility. Educated women face a higher opportunity cost of raising children and are more likely to be childless. The move towards more gender equality therefore contributes to the overall transformation of childlessness from involuntary to voluntary.

Childlessness among the poor is of particular importance as far as policy is concerned. According to the notion of “capabilities”, even though poor and rich childless individuals have the same “functioning” (being childless), they do not have the same “capability set”. Indeed, whenever an individual does not have the opportunity to achieve a “valuable functioning” (in this case parenthood), this individual suffers from “capability deprivation”. Fighting the causes of social sterility could then allow the set of capabilities of the poor to increase. We show that reducing wage inequalities and promoting gender parity on the labor market are powerful tools to limit the proportion of (involuntary) childlessness generated by poverty. A drop of 7 percent in the Gini coefficient could reduce the percentage of socially sterile women by 25 percent.

This article is based on the paper, ‘Fertility and Childlessness in the United States’, in the American Economic Review 2015.

David de la Croix – Université catholique de Louvain (Belgium)
David de la Croix is Professor of Economics at Université catholique de Louvain (Belgium). He has taught on a visiting basis at UCLA, Copenhagen, Aix-Marseille, Nanterre, Capetown, Sao Paulo and Rostock. He is the instigator and editor-in-chief of the Journal of Demographic Economics. His research interests cover demographic economics, human capital, conflict between generations, and growth. His choice of topics reveals that he is mostly interested in understanding households’ incentives and how they shape the future of our societies.