Each year the US federal government spends billions on farm subsidies, with policy makers often justifying the expense on the grounds that it helps to support the rural economy. In new research, Jeremy G. Weber looks at who really benefits from improvements in agricultural profitability. He finds that farmers and property owners captured 94 percent of income gains from higher agricultural revenues, while laborers and non-farm workers only captured 3 percent. He argues that the rise of technological innovation in farm equipment has reduced the need for labor, severely weakening the link between crop agriculture and the rural economy.

The U.S. Federal government continues to subsidize agriculture, especially crop agriculture. From 2004 to 2014 the combined annual payments from major Federal farm programs ranged from roughly 5 to 20 billion dollars per year. In addition, the Federal government paid between 3 to 7 billion dollars per year to subsidize crop insurance premiums for farmers. Policy makers often justify the subsidies by stressing that agriculture is the engine of the rural economy. But is the relationship between agriculture and the rural economy strong enough to serve as a pillar of justification for agricultural subsidies? Recent evidence from the country’s dominant corn and soybean producing region, the US Heartland, suggests that the answer is “no”.

The increase in crop prices in the late 2000s provides an excellent opportunity to assess the link between agriculture and the local (county) rural economy. Increased demand – in part because of U.S ethanol policy – caused corn and soybean prices to be much higher in the 2006-2010 period compared to the prior five year period. Higher prices meant higher profits for farmers: per acre operating margins (the value of production less operating costs) in the 2006-2010 period were more than double those of the prior five years (Figure 1). 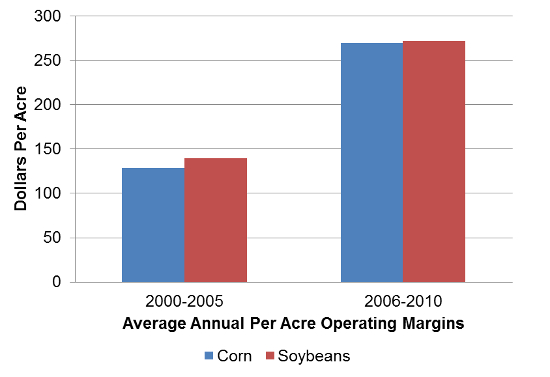 How did greater agricultural revenues and profits affect local income? For counties in the Heartland Region, (see Figure 2), each dollar increase in agricultural revenues from 2005 to 2010 led to a $0.64 increase in personal income over the same period. Farmers and property owners (think farmland) captured 94 percent of the income gain while farm laborers and non-farm workers and proprietors each captured 3 percent (Figure 3). 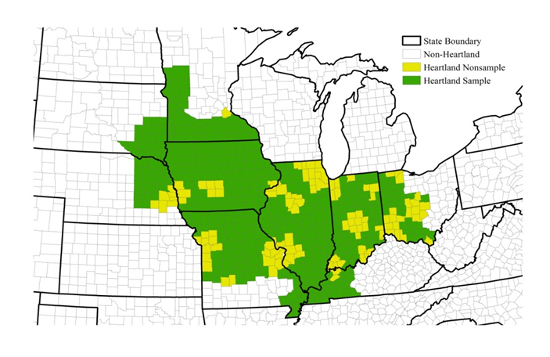 Figure 3. Farmers and Property Owners Capture Most of the Local Income Created By Higher Agricultural Revenues 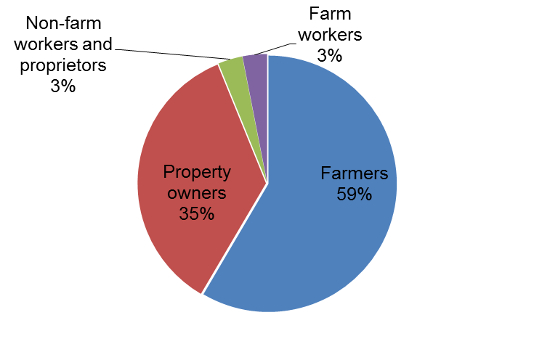 The small share of income captured by the non-farm economy is especially surprising given that non-farm workers and proprietors accounted for 82 percent of personal income for the average Heartland county in 2005. The income of farmers and farm workers, in contrast, accounted for just 3 percent of total income. Most of the total income gain was therefore concentrated in a very small part of the rural economy. Unsurprisingly, increasing agricultural revenues and profits had no clear effect on non-farm employment or total population.

One caveat worth mentioning is that the estimates do not capture income or jobs geographically unrelated to where crops are grown. The estimates only reflect local income and jobs associated with local production. Thus, jobs created at John Deere headquarters or those of other agriculturally-related corporations are not captured here. On the other hand, the income generated at the John Deere service center located in an agriculturally-rich county is captured.

A weakened link between agriculture and the rural economy

The weak link between crop agriculture and the rural economy is not surprising given the changes in the organization of agriculture. U.S. agriculture dramatically reduced its use of labor in the 20th century as horses gave way to tractors (and then bigger tractors) and favorable wages in other sectors motivated people to leave the farm. Over the century the share of the workforce employed in agriculture declined from 41 percent to less than 2 percent, and production became concentrated on fewer, larger, and more capital intensive farms.

Innovation in farming equipment, along with a capital to labor cost ratio favorable to mechanization, has allowed one farmer to cover more and more acres. The technology of the 1970s allowed one farmer to plant 40 acres; in 2010 one farmer could plant 945 acres. The capital intensification of crop agriculture, in turn, affects how higher crop prices ripple through the rural economy. Because row-crop agriculture in the 2000s involves few people, higher crop prices – and agricultural profitability in general – should primarily affect the rural economy by increasing returns to assets employed in production, not through hiring more people or paying them higher wages. This helps explain why higher crop prices had little effect on farm or non-farm labor income.

The large share of income captured by property owners is also intuitive. The most fundamental input crop farm asset – cultivable land – is essentially fixed. From 1945 to 1997, the number of acres of cropland increased by less than one percent. As crop prices increased, greater demand caused land values and land rental rates to increase markedly. This means that farmland owners can capture much of the benefits of economic conditions or policies that improve the profitability of farming.

The merit of agricultural subsidies needs to be reexamined

The debate surrounding the recent Agricultural Act of 2014 involved the usual assertions about farmers being the backbone of the rural economy and the need for job creation. After a short-term extension of the prior Act and much political contention, the direct payment subsidy program, which had been a staple of U.S. farm policy since 1996, was eliminated in favor of expanding Federal crop insurance, the new cornerstone of farm policy. The change in policies, however, did not mean an end of agricultural subsidies because the Federal government pays a large share of the insurance premiums that farmers would pay in an actuarially fair insurance market. In recent years, crop insurance premium subsidies have exceeded direct payment subsidies by a billion dollars or more. And with the expansion of crop insurance in the 2014 Act, spending on premium subsidies may very well increase.  When the 2014 Act expires in 2018, the merits of agricultural subsidies of any sort should be carefully examined. In light of the empirical evidence, supporting the rural economy through agricultural subsidies should not be one of them.

This article is based on the paper, ‘Crop Prices, Agricultural Revenues, and the Rural Economy’, in Applied Economic Perspectives and Policy.