How an elevator can be key to a candidate’s electoral success.

How an elevator can be key to a candidate’s electoral success.

Can candidates use non-campaign advertising to help them to win elections? Using the example of North Carolina Commissioner of Labor Cherie Berry – who has her picture placed in every elevator in the state – Jacob Smith and Neil Weinberg find that this non-campaign advertising did increase her share of the vote. They write that in an era when races in competitive states like North Carolina are decided by only few percentage points, such an effect has the potential to swing the outcome of elections.

North Carolinians who ride in elevators on a semi-frequent basis are undoubtedly familiar with North Carolina Commissioner of Labor Cherie Berry or, as she’s known by many in the Tar Heel state, the “elevator lady.” Berry, a statewide elected official who supervises the Department of Elevators and Amusement Devices, has achieved this fame following a decision she made after the 2004 election to have her picture and name appear on the inspection placard in every elevator in North Carolina (see Figure 1). In new research, we demonstrate that the placement of her picture-adorned inspection placards relates to an improvement in her electoral fortunes. 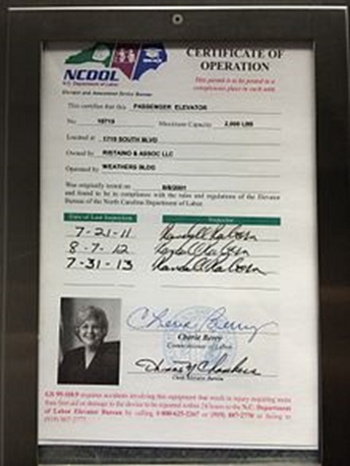 Cherie Berry is not the only elected official in the United States to engage in this sort of activity (for example, some state driver licenses list the name of the governor), but she is a novel example of this type of advertising for which there is public data to analyze. Indeed, going beyond other similar examples, Berry’s fame from the pictures has resulted in her becoming a niche celebrity, as several songs have been written about Commissioner Berry and a parody Twitter account has appeared with the handle @ElevatorQueen. Furthermore, Berry herself has enjoyed her new status, running a television advertisement in the 2012 election where she spoke out of her elevator picture.

Y'all my picture is in elevators so it seems fairly logical that the $10 bill is the next step…. #CherieIsA10

We theorize that Berry’s picture serves as a form of non-campaign-specific political advertising that has the potential to affect voters’ opinions about her. Although the negative television advertisements that are the hallmark of modern American elections may be the first thing that comes to mind when one thinks about political advertising, they are not the only kind of this advertisement. Indeed, according to political scientist David Mayhew, advertising consists of any activity that favorably spreads non-issue-related information about an elected official

We posit that Berry’s elevator pictures, which contain no information other than her name and picture, increase voters’ favorable name recognition of the commission in a manner proportional to voters’ exposure to the picture through a process known as priming which causes voters to think about a specific aspect of an object. As a result of being primed to think about Berry’s smiling face on the placards when they think about her, we expect to find that Berry performs better than the typical Republican officeholder in parts of the state with a higher concentration of elevators.

Note: Number of counties per quantile in parentheses; quantiles by # elevators/1000 people; fig. made in GeoDa™.

Next, using spatial regression models, a statistical method used to take into account spillover effects across nearby geographic units, we find empirical evidence to support our expectations. We test our hypotheses in several ways, examining both Berry’s performance compared to other statewide Republican candidates and compared to her own performance before the picture-adorned placards we installed in 2005. Initially, controlling for a number of factors including population density, we find that Berry did not perform better than other statewide Republican candidates in counties with a high concentration of elevators (our specific measure is elevators per thousand residents in a county).

We then look at Berry’s performance in 2008, controlling for an array of factors. In 2008, the most recent election following the installation of Berry’s placards, we do not find a relationship between her performance and that of other Republicans in 2008. We do, however, find that Berry did better in counties with a higher concentration of elevators compared to her own performance. At first glance, these results seem somewhat contradictory. To understand them, one can think of an analogy of a runner who has fairly recently started to train when she runs a race. While she may not finish among the fastest competitors, her performance still may be better than her own prior race times in races before any training took place.

Note: Number of counties per quantile in parentheses; quantiles by pct. of avg. GOP vote; fig. made in GeoDa™.

Our results for 2012 are more straightforward to understand. Berry performs better in elevator-dense counties compared to her own prior performances in those counties, as well as compared to other Republicans in 2012. We also find that, controlling for the average Republican vote share in a county, a higher concentration of elevators correlates with a higher overall vote percentage for Berry.

Note: Number of counties per quantile in parentheses; quantiles by Berry’s 2012 deviation from average GOP vote; fig. made in GeoDa™.

Some spatial regression models are hard to interpret, so one way to put results into context is to look at what would happen across the state if the concentration of elevators were to increase in a hypothetical county. For our conceptualization, we increase the number of elevators per thousand people in Alamance County by one elevator per thousand Alamance county residents when looking at Berry’s predicted deviation from the average statewide Republican vote share in 2012. In this hypothetical scenario, Berry’s predicted vote deviation from the average Republican in Alamance County increases by approximately 0.57 percent. Due to spillover effects across county borders, we look at the predicted effect of this scenario in other North Carolina counties. We find that Berry’s vote share increases somewhat more in counties close to Alamance County than in counties that are more geographically distance from Alamance County. For example, Berry’s predicted vote deviation increased by 0.1 percent in neighboring Caswell County, but just under 0.08 percent in non-neighbor Buncombe County.

Our results suggest that elected officials have the potential to favorably affect their vote share through non-campaign-specific advertising. In an era when races in competitive states like North Carolina are decided by only few percentage points, such an effect has the potential to swing the outcome of elections. Furthermore, for politicians who want to run for higher office, favorably increasing their name recognition without any cost to their campaign coffers is an attractive prospect. While Berry ultimately chose not to jump into the 2014 North Carolina Senate election, her poll numbers were better than those of all other prospective Republican candidates in an April 2013 Public Policy Polling survey. Ultimately, while other politicians may not have the authority to place their pictures in elevators, engaging in this sort of political advertising may allow them to rise to the highest office they wish to achieve.

This article is based on the paper, ‘The Elevator Effect: Advertising, Priming, and the Rise of Cherie Berry’, in American Politics Research.