Group advocacy has achieved major policy successes in the past fifty years, anti-discrimination policies in employment, and the legalization of same-sex marriage to name two. But does this advocacy represent all groups that need it? In new research which surveys over 200 advocacy organizations Kathleen Marchetti looks at why some groups, such as black women and transgender individuals, are missing from some organizations’ policy discussions and representation. She finds that, among other factors, when women are better represented in state legislatures, advocacy groups are more likely to diversify their policy agendas, but also that more meetings with legislators can reduce organizations’ representation of disadvantaged constituents.

Identity-based organizing around political, social, and economic causes is often touted by scholars, media outlets, the general public, and the organizations themselves, as a way to diversify the democratic process. Beyond giving a voice to “the people”, this type of advocacy has been credited with some pretty major policy successes: anti-discrimination policies in employment and pay, increased accessibility and awareness for people with disabilities, and more recently the Supreme Court’s June 2015 decision legalizing gay marriage. Representations of identity-based organizing frequently carry strong normative messages that this type of advocacy is somehow qualitatively “better”: It’s more authentic. More effective. More democratic. However, what happens when particular groups of people are unable to participate in activism? What does it mean when organizational leaders routinely prioritize one issue or constituency over others? Are advocacy groups still making a positive contribution to the political process? Or, are they perpetuating existing political, social, and economic inequalities? Transgender men and women would likely argue that they’ve been routinely underrepresented in the campaigns of groups claiming to work on behalf of lesbian, gay, bisexual, and transgender individuals. Similarly, in the 1960s and 1970s many black women found themselves without a voice in a civil rights movement with predominantly male leadership positions and a feminist movement that focused primarily on the experiences and problems of white, upper middle-class women. Given these examples, the question becomes: for which people and for what ends are groups advocating?

To examine this and related questions, I surveyed over 200 advocacy groups focused on issues of race/ethnicity, gender, class, sexuality, and disability across 14 US states. All of these organizations wanted to affect policy within their state and claimed to represent broad constituencies of people united by a common identity that has historically been politically, socially, and/or economically disadvantaged. Previous research has revealed very little attention to the concerns of groups like low-income mothers or gay men of color; that is, people who face multiple layers, or intersections, of oppression. Though many organizations claim to represent these individuals as part of their focus on the poor, women, gay men, or racial minorities, their complex experiences are frequently brushed aside in favor of more “mainstream” policy priorities. These findings prompted me to ask: why are these individuals missing from organizations’ policy discussions and what factors encourage or prevent organizations from working on their behalf?

The organizational survey asked executive or policy directors to provide information about their groups’ policy agendas over the 2010-2011 state legislative year. Using these responses, I considered whether each issue addressed mainstream or advantaged constituents of the organization (e.g., affirmative action in higher education would primarily benefit middle-class people of color) or whether the issue would affect constituents facing intersections of disadvantage (e.g., state-sponsored childcare would primarily benefit low-income mothers and families).  In addition, respondents provided information about a variety of topics unique to their particular organization: e.g., how often they meet with their group memberships, whether they consult their members when making policy decisions, how frequently they meet with state legislators, and whether members were allowed to serve in group leadership positions. To determine what motivates or prevents groups from engaging in “intersectional advocacy”, survey responses were analyzed alongside state-level factors that have been shown to affect organizing: party dominance and ideology of the state legislature, the presence of other organizations that may increase competition for resources and access to legislators, women’s and African-Americans’ political representation, and the state’s fiscal health.

Multivariate analysis revealed several aspects of state policy environments that affect the diversity of groups’ policy agendas. First, state legislative environments often shape organizations’ attention to disadvantage: both women’s representation and legislative professionalism (e.g., length of legislative session, legislator pay, number of staff) increase groups’ attention to intersectionality. Figure 1 shows the effect of women’s representation (measured by the percentage of women in the state legislature) on the number of issues on groups’ agendas that address intersections of disadvantage. If we think of this result in terms of the states in the study, increasing women’s representation by 25 percentage points, which is equivalent to the difference between the proportion of women legislators in Colorado (41 percent) and Tennessee (16 percent), would cause organizations to place one additional intersectional issue on their policy agendas.

Figure 1 – Effect of Women’ Representation on Attention to Intersectional Issues 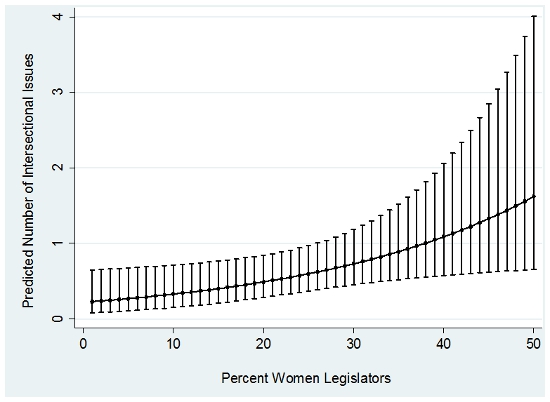 Note: It is important to note that few organizations have more than one issue on their agenda that could be considered intersectional and that the majority have no intersectional issues on their policy agendas. This reduces the scale of the vertical axes in Figures 1 and 2.

Though women’s representation in the state legislature positively affects groups’ attention to disadvantaged constituents, advocates’ relationships with legislators are not always positive. Figure 2 shows the effect of how frequently groups meet with legislators on their attention to intersectional issues. Though the effect is relatively small in a substantive sense it is also clearly negative, indicating that the more frequently groups meet with legislators, the less attention they pay to intersectional oppression. This result is in keeping with previous research suggesting that advocacy organizations can be co-opted by the policymakers with which they interact. In addition, organizational crowding (measured by the total number of organizations registered to lobby in a given state) was shown to have a negative effect on intersectional advocacy. 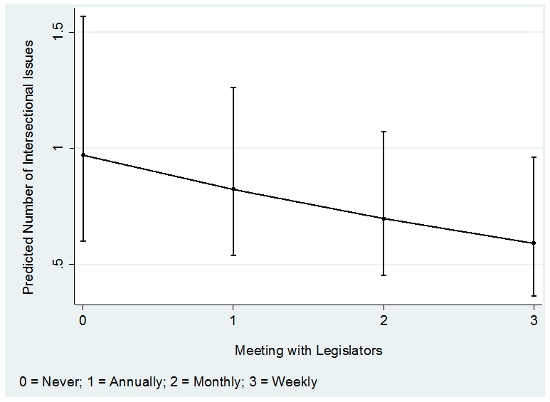 This research represents a first cut at understanding the role that advocacy groups play in policymaking at the state level and the importance of context in shaping groups’ attention to people who face multiple levels of oppression. Though the representation of these groups is not overwhelming, some factors can encourage it. By considering how these factors interact with other potential motivations (for example, the policy priorities of the state legislature and the diversity of groups’ supporters) scholars will gain a better understanding of who advocacy organizations are representing and whether we can count on them to facilitate a more open democratic process.

This article is based on the paper, ‘Consider the Context: How State Policy Environments Shape Interest Group Advocacy’ in State and Local Government Review.