While the rescue of Fannie Mae and Freddie Mac was generally successful, there is still no end in sight to their conservatorship.

While the rescue of Fannie Mae and Freddie Mac was generally successful, there is still no end in sight to their conservatorship. 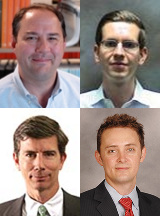 Seven years ago the US government dramatically rescued the government-sponsored enterprises Fannie Mae and Freddie Mac, placing them into conservatorship, a situation that remains ongoing. In new research, W. Scott Frame, Andreas Fuster, Joseph Tracy, and James Vickery, assess the success of the rescue using five criteria. They find that while the agencies were able to support mortgage supply through the crisis and afterwards, the rescue was less successful in supporting the government’s macroeconomic objectives. While there is broad agreement that Fannie Mae and Freddie Mac should be replaced by a private system, there is no end to their conservatorships in sight.

In September 2008, the US government engineered a dramatic rescue of Fannie Mae and Freddie Mac, placing the two firms into conservatorship and committing billions of taxpayer dollars to stabilize their financial position. While these actions were characterized at the time as a temporary “time out”, seven years later the firms remain in conservatorship and their ultimate fate is uncertain. In new research, we find that while the 2008 rescue was a success in several key dimensions, it was less successful in aligning the organization’s activities with broader macroeconomic objectives.

Fannie Mae and Freddie Mac are government-sponsored enterprises (GSEs) that play a central role in the US housing finance system, financing about half of the $10 trillion residential mortgage market. Both firms are publicly held and were created by Acts of Congress to enhance the liquidity and stability of the secondary mortgage market and thereby promote access to mortgage credit, particularly among low-and-moderate income households and neighborhoods. Fannie Mae and Freddie Mac engage in two principal activities: [1] creating “agency” mortgage-backed securities by insuring mortgage pools against credit losses; and [2] investing directly in mortgage assets. The two GSEs’ federal charters provide important competitive advantages that long implied US taxpayer support of their obligations. As profit maximizing firms, Fannie Mae and Freddie Mac leveraged these advantages over time to become very large, very profitable and very politically powerful.  The figure below illustrates the GSEs’ rapid growth in terms of overall business size and share relative to the residential mortgage market. 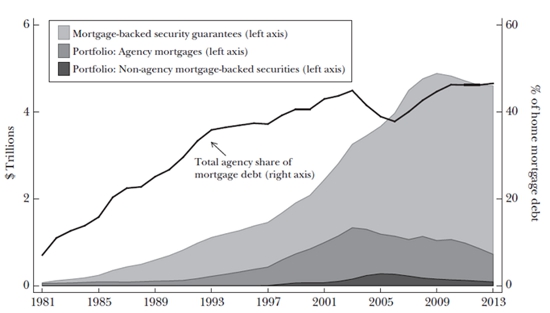 In 2008, as the US housing crisis intensified, Fannie Mae and Freddie Mac became financially distressed. Their high leverage and concentrated exposure to the mortgage market turned out to be a recipe for disaster in the face of a large nationwide fall in house prices and the associated surge in mortgage defaults.  As the  GSEs’ stock prices plummeted and they began having trouble rolling over their debt, their regulator, the Federal Housing Finance Agency (FHFA), placed the two GSEs into conservatorship, taking control of the firms on September 6, 2008, in an effort to conserve their value and allow them to continue operating as going concerns. Concurrently, the US Treasury entered into senior preferred stock purchase agreements with Fannie Mae and Freddie Mac; under these agreements US taxpayers ultimately injected $187.5 billion into the two firms.

Was a short-term public intervention necessary? We argue “yes”, because of the central role of Fannie Mae and Freddie Mac in the US mortgage market, and their interconnections with the rest of the global financial system. We highlight three key points. First, stabilizing the GSEs allowed them to continue financing mortgages – both for home purchases and refinances. This was particularly important at the time because of the tight supply of other forms of mortgage finance, including a market freeze in the nonagency securitization market. Second, the government rescue supported overall financial stability. GSE debt and MBS were widely held by leveraged financial institutions and commonly used as collateral in short-term funding markets. Allowing credit losses on these securities would have exacerbated the weak capital and liquidity position of many already-stressed financial institutions and raised the possibility of forced asset sales and runs. Third, foreign central banks and governments also held significant quantities of GSE obligations; a default by either or both firms could have had international political ramifications, and potentially undermined the perceived creditworthiness of the US government itself.

Turning to the form of the rescue, our view is that an optimal intervention into Fannie Mae and Freddie Mac would have involved the following elements:

(i) The firms would be able to continue their core securitization function as going concerns, supporting the supply of mortgage credit.

(ii) The firms would continue to honor their debt and mortgage-backed securities obligations.

(iii) The value of the common and preferred equity in the two firms would be extinguished, reflecting their insolvent financial position.

(iv) The two firms would be managed in a manner consistent with broader macroeconomic objectives, rather than just maximizing the private value of their assets.

(v) The structure of the rescue would prompt long-term reform within a reasonable period of time.

Evaluating the rescue against these goals, we believe that the conservatorships largely accomplished the first three objectives. The financial lifeline provided by the US Treasury enabled Fannie Mae and Freddie Mac to support mortgage supply through the crisis and its aftermath and to take up the slack left by the breakdown in nonagency securitization (see Figure 2), thereby supporting the fragile housing market. Holders of agency debt and mortgage-backed securities did not suffer credit losses, insulating the broader financial system from contagion effects. And both common and preferred equity holders were effectively wiped out, consistent with market discipline. 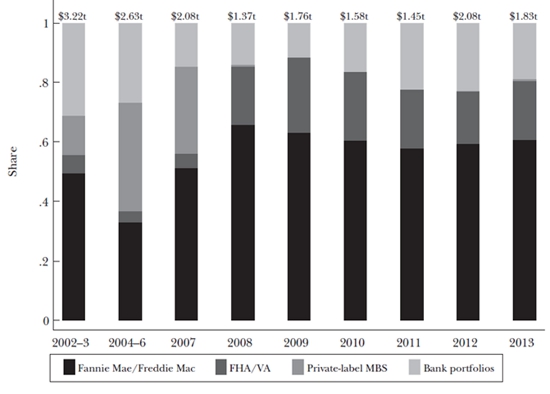 Source: Inside Mortgage Finance.
Notes: Numbers at the top of each bar indicate total first-lien issuance for the year in trillions of dollars (in case of 2002–2003 and 2004–2006, these are annual averages). “FHA/VA” stands for Federal Housing Administration and the Veterans Administration, which are government agencies that insure loans that are then securitized in Ginnie Mae mortgage-backed securities. “MBS” stands for mortgage-backed securities.

The conservatorships were arguably less successful on the fourth objective of aligning the activities of Fannie Mae and Freddie Mac with broader macroeconomic objectives during the Great Recession. By law, the conservatorships are intended to put the GSEs in a “sound and solvent condition” and to “preserve and conserve” their “assets and property.” But this focus conflicted at times with other public policy objectives. One example is the GSEs’ aggressive enforcement of “representations and warranties” whereby the firms “put back” a large number of defaulted mortgages to originators. While these put-backs were typically legally justified, a consequence was an unhelpful tightening of underwriting standards and higher costs of mortgage lending after the financial crisis.

The conservatorships have also strikingly failed in relation to our fifth and final objective of producing long-term mortgage finance reform. As Treasury Secretary Henry Paulson wrote, “We described conservatorship as essentially a “time out,” or a temporary holding period, while the government decided how to restructure the [government-sponsored enterprises].” However, starting the conservatorships turned out to be easier than ending them and the “time out” has now stretched beyond its seventh year with no clear path to reform.

What’s next? Although there appears to be broad consensus that Fannie Mae and Freddie Mac should be replaced by a private system—perhaps augmented by public reinsurance against extreme tail outcomes—substantial disagreement remains about how to implement such a system, and at present no end to the conservatorships is in sight. The many legislative proposals to date all reflect the cross-currents of trying to protect the taxpayer, preserve support for the 30-year fixed rate mortgage, and keep homeownership affordable to a wide spectrum of borrowers. While the lack of action to date is not cause for optimism, the current situation provides a unique opportunity to put the US mortgage finance system on a more stable footing, an opportunity that we hope is not wasted.

This article is based on the paper, ’The Rescue of Fannie Mae and Freddie Mac’, in the Journal of Economic Perspectives. A version of this article also appeared at the Liberty Street Economics blog.

Joseph Tracy – Federal Reserve Bank of New York
Joseph Tracy is an Executive Vice President and Senior Advisor to the President at the Federal Reserve Bank of New York. His primary research interests include unions and collective bargaining as well as housing and urban economics. Prior to joining the New York Fed, Mr. Tracy was an associate professor at Yale University and Columbia University.