For the past three decades, studies have found evidence that people of color and low-income communities are more exposed to environmental risks, which can lead to poor health outcomes. In new research, Jiaqi Liang looks at the role of state governments in the enforcement of regulations to protect these communities. She finds that there is a positive relationship between the generosity of a state’s welfare benefits and its environmental protection enforcement for vulnerable African-American communities.

According to the US Environmental Protection Agency (EPA), environmental justice (EJ) refers to “the fair treatment and meaningful involvement of all people regardless of race, color, national origin, or income with respect to the development, implementation, and enforcement of environmental laws, regulations, and policies.” Since the inception of the EJ movement in the 1980s, considerable studies have suggested that people of color and low-income communities are more likely to live close to noxious facilities, be subject to higher levels of environmental risks, or be afflicted with resultant adverse health impacts. Meanwhile, an increasing number of EJ research has paid attention to the implementation process of public policy and the behavioral responses of government agencies, specifically examining whether public agencies enforce environmental regulations in ways that are inequitable to different groups of social members.

As opposed to extensive research that focuses on the location of polluting facilities and the associated environmental harms to human health, scholarship probing the antecedents of environmental policy implementation inequities remains relatively underdeveloped. What studies there have shown that a state’s political and ideological contexts as well as a community’s demographic and socioeconomic profiles play a significant role in shaping government agencies’ administrative outputs in environmental programs. However, current research has largely ignored the connection between the experiences of the socially marginalized and the degenerative policy contexts which subtly target this specific segment of citizens.

In new research, I find that state’ environmental inspection and enforcement activities for communities of color are more common when the state has more generous welfare benefits, and that the reverse is also true: more stringent benefit regimes are associated with fewer environmental protective services. This effect is also a relatively new one; this relationship did not exist before the 2000s. 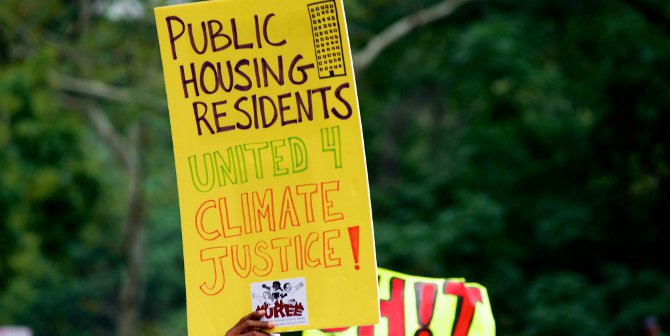 Theories of group-centric policies argue that government’s decisions on the distribution of policy benefits and costs for citizens are jointly determined by the political power and categorization (“reputation, image, and social standing”) of target populations. More importantly, public policy design that embodies such categorization is able to convey and reinforce the message regarding the deservedness (or lack thereof) of different groups of social members in terms of government’s service and attention. Over the past twenty years, seeking to integrate the politics of group recognition into a diagnosis of the institutional and social bases of environmental inequality, EJ scholars have suggested that environmental inequities more or less result from the misrecognition of the socially marginalized as a group of citizens who are entitled to equal protections and full legal rights. As environmental policy has increasingly been characterized by both regulatory and redistributive politics, a comprehensive examination of the public services delivered to the vulnerable populations should also proceed from the lens of group-centric policy context.

My research investigates whether and how states’ design of welfare policy impacts the pattern of environmental regulatory enforcement in the counties composed largely of African Americans who are the poorly regarded beneficiaries of redistributive programs. In the contemporary US, welfare represents one of the most notable group-centric, degenerative policies implicitly targeting African Americans in negative and unfavorable ways. The most recent, profound welfare reform features the enactment of the Personal Responsibility and Work Opportunity Reconciliation Act of 1996 (PRWORA), which shifted welfare-as-an-entitlement to welfare-to-work by replacing the Aid to Families with Dependent Children (AFDC) federal entitlement to assistance program with the Temporary Assistance for Needy Families (TANF) block grant program. As the TANF has adopted key provisions of work requirements, time limit, sanctions for noncompliance, and expansion of states’ latitude, it is noted that this reform escalated the susceptibility of African Americans to the group-centric, degenerative politics.

Using data on 45 states from 1996 to 2010 and controlling for a variety of political, socioeconomic, and demographic factors at both the state and county levels, my research finds that the design of welfare policy sheds a significant light on state agencies’ administrative outputs for predominantly black counties under the National Pollutant Discharge Elimination System permit program of the Clean Water Act. Specifically, environmental inspection activities for the black communities of concern increase when a state has more generous welfare benefits (measured by the maximum income initial eligibility for a family of three and the maximum monthly cash benefit for a family of three with no income). However, African-American vulnerable communities in those states with more stringent welfare eligibility and sanctions (measured by the time limit policies on the length of receipt of welfare, the reduction in benefits and the length of the punishment given noncompliance with work requirements, and family cap policy) saw a reduction in environmental protective services. As for regulatory punitive actions, similar patterns are observed in terms of the distinct effects of different welfare policy design on the activeness of agencies’ environmental policy implementation for African-American counties of concern.

My research also evaluates the development of the effects of group-centric policy regime over time, by performing separate analysis for 1996, 2000, 2005, and 2010. Results show that compared to eligibility and sanction stringency, welfare benefit generosity is a more consistent predictor of environmental implementation efforts for vulnerable black communities. Furthermore, the effect of welfare benefit generosity on states’ compliance assurance practices emerged at the outset of the new century, whereas such effects did not predict environmental inspection activities until the mid-2000s.

This article is based on the paper, ‘The Shadow of the Politics of Deservedness? The Implications of Group-Centric Policy Context for Environmental Policy Implementation Inequalities in the United States’, in the Journal of Public Administration Research and Theory.