“John, Jim, Jake, Josh, Jack …and Jane.” Five out of every six names that appear in the media today are those of men. Indeed, the more mentions a person receives in the media, the higher the chances are that this person is a man. That is because 82 per cent of the names mentioned in the media are men’s. Go ahead and try it!

These conclusions come from our new research which examined big data from more than 2,000 U.S. newspapers, magazines, and online news sources, covering the period from 1983-2009. We found that despite women’s significant progress in many social, educational, and economic fields over the last few decades, there remains a persistent and telling underrepresentation of women in media coverage, which we refer to as a ‘paper ceiling’.

But why are women muffled in the media and how can we explain this persistent underrepresentation? Social scientists have been grappling with this question for decades. Our study is the first to provide a systematic empirical answer for this question, testing competing explanations in the literature.

We found that the paper ceiling is due to a combination of the media’s preoccupation with leaders at the expense of everyone else and the well-known ‘glass ceiling’ that continues to block off working women’s access to leadership positions. The media focuses nearly exclusively on individuals at the top of occupational and social hierarchies, who are mostly men: CEOs, politicians, movie directors, and the like. And because these famous individuals account for most of those named in the news, there continues to be a big gap between the mentions of men and women in the overall media coverage.

Quite surprisingly, women’s presence was no greater in news produced by liberal American media organizations than in that produced by conservative ones. Nor did we find that women’s presence in the media increased in organizations where women were section editors (see Figure 1), editors-in-chief, managing editors or where there were more women on the editorial boards. In effect, there exists a two-tier system when it comes to media mentions. On the one hand, we found near parity in terms of male and female mentions in media for ‘obscure individuals’, people who make the news only once or twice. On the other hand, we found a huge gulf between the mentions of men and women when it comes to the names of the famous individuals who tend to dominate the news, the majority of whom remain men. In other words, the media is still a man’s world. 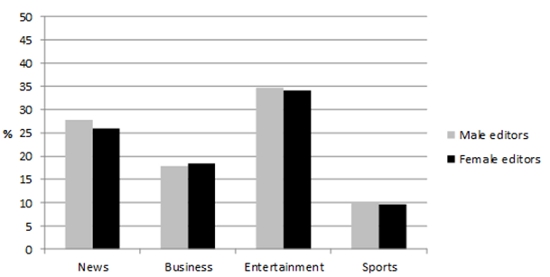 Another surprising finding came from breaking the data into newspaper sections. Notably, men’s domination in media coverage was not restricted to sports, the section where women’s names are indeed least present. Rather, the large majority of the people mentioned in the news, business, and even entertainment articles were also men. The entertainment coverage may be especially surprising because people tend to believe that female celebrities are just as, if not more, famous and draw at least equal amounts of attention as their male counterparts. However, the great majority of directors, producers, comedians, and other prominent people in the entertainment industry are men, and most high-revenue movies still have more main male characters than female characters.

Furthermore, we found that gender coverage inequality is not limited to traditional media. A random sample of Facebook data for 2014 shows similar results with very large differences in coverage between men and women, in particular those who are relatively well known. Again, this may seem quite surprising, as social media is produced in a more democratic fashion, and is freer of traditional institutional restrictions and gatekeeping practices, such as men’s dominance in newsrooms and on editorial boards. We therefore conclude that regardless of media, as long as men continue to dominate the highest levels of occupational and social hierarchies, we are not likely to see a major shift in media coverage.

This state of affairs appears to come with a price for women. One possible result of these inequalities is a consequent unequal distribution of resources. For politicians, movie actors, authors, scientists, victims or catastrophic events, and many others, media attention is closely associated with various benefits: greater access to voters and votes, financial royalties, prestige, and humanitarian aid. Lesser media attention to certain categories of social and health problems may also impede policy and drug development, for example in cases of violence against women or female-specific diseases. But beyond that, the dominance of men as subjects of public and dinner-table conversations may reinforce and normalize in the minds of audiences the notion that power and newsworthiness are something men have and, apparently, deserve. Those individuals who are not in newspapers (whether it is because of their gender, race, or other factors) are implicitly framed as less important.

This article is based on the paper, “A Paper Ceiling: Explaining the Persistent Underrepresentation of Women in Printed News,” by Eran Shor et al. in the October issue of the American Sociological Review.

The research was funded by the Social Sciences and Humanities Research Council of Canada (SSHRC), American Sociological Association fund for the Advancement of the Discipline, the National Science Foundation, and Google Faculty Research Awards.

Eran Shor – McGill University
Eran Shor is Assistant Professor of Sociology at McGill University. His interests include political conflict, human rights, national identities, and media representations. Shor’s research focuses on the intersection of conflict, terrorism and human rights on a cross-national basis. He has recently completed comparative research on the various factors playing a role in states’ counterterrorist policies.